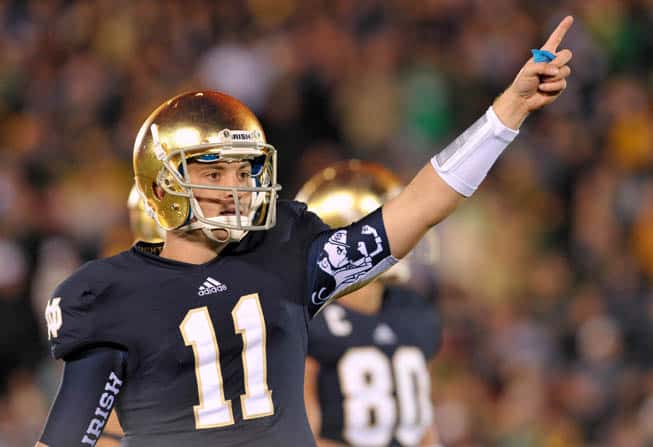 Continuing our rankings of the toughest 2013 football schedules, the independent schools take center stage. Every game will be accounted for in these rankings, which wasn’t the case in the previous non-conference rankings.

A lot of teams that had higher ranked non-conference schedules are present on these slates and they will play a big factor in these rankings. Without further delay, from last to first, here are the toughest independent schedules of the 2013 season.

Navy and Army’s schedules were very hard to look at side-by-side, as they are pretty close to even. I think the thing that put Navy’s over the top is the visit from Notre Dame whereas Army gets their toughest opponent, Stanford, at home. A tricky stretch consisting of a very solid Toledo team, followed by Pittsburgh and the aforementioned Notre Dame game could trouble the Midshipmen, and that same troubling stretch places Navy ahead of Army.

The tandem of playing at UCLA and at Texas is definitely a tough start. Minnesota, San Diego State, and UL Lafayette, without a doubt, adds to the complexity of this slate as well. The weak spot is the end of the schedule, which closes with Boston College, at Florida Atlantic, and Idaho at home. That should help NMSU add some wins to the column, as should playing Abilene Christian. The schedule is top heavy though, with a brutal stretch in the first five games. That’s enough to land the Aggies at fourth in these schedule rankings as Idaho’s road game tandem is a little tougher.

Idaho might have lost the most talent of any team in the nation this offseason, and a solid schedule doesn’t help the matter. They should fare a little better in the Sun Belt next year, but until then playing some marquee opponents – on the road, no less – will not help the Vandals winning percentage this year. Road contests against Washington State, Ole Miss, and Florida State stand out, while games against Temple, Northern Illinois, and what should be a very good Fresno State team will spell trouble for the Vandals.

Games on the road against Virginia, Wisconsin, and Notre Dame are some of the most daunting on this schedule, but the Cougars also have a few solid teams coming to Provo. Texas, Utah, the ever dangerous triple–option and Georgia Tech as well as the forever pesky Boise State Broncos gives this slate the second spot in our rankings. BYU also travels to surprising Utah State and closes the season at Nevada. Even Middle Tennessee is no slouch as BYU tries to improve on their eight win season from a year ago.

This wasn’t really much of a decision to be made. Notre Dame’s existing rivalries seemed to solidify their schedule for the top spot. The normal appearances of Michigan and Purdue – both on the road – and Michigan State, USC, and Stanford at home do this schedule enough justice. The addition of fellow independent institution BYU along with games at Pittsburgh and Air Force and vs. Arizona State in Arlington add to the toughness. Add in another match-up with Oklahoma and the Fighting Irish’s strength of schedule is among the toughest in 2013.

Last season, undefeated the Irish had an easy sced ?

Tim Pertler: Oklahoma and USC are easy games? Road games at Michigan and Stanford are easy?? Okay, whatever.

Really, Tim Pertler? Notre Dame is playing 11 teams that went to bowl games last year. Who else in the country can say that? Certainly not Alabama or anybody else in the SEC.

Love the article but…

Surely this must mean the highest percentage of talent rather than most talent. If not, how did they win some games last year?

But thanks for the article.

Idaho had no talent last year. How could they lose it?

This year’s schedule for BYU is tough enough compared to last year’s that if we win 8 games again that’ll be improvement. I’m hoping for a double digit win season of course, but this is a big step up from the last two years of schedules.

ND travels to Stanford. They make 1 trip west each year to either USC or Stanford and host the other one. They are smart enough to always host the pac-12 team in Mid October and make their Calif trip in late November once the cold weather hits South Bend.

That change helped SC & later Stanford … SC was the the party that changed the date to mid October after the 1960 game ,, did not want to play in the cold weather… A smart move by the Trojans … They avoided the cold and the Irish (until their indoor practice facility was built) would not get alot of practice reps (cold & snow) before their November trip to L:A. 64, 70, & 80 ND lost possible national championships to SC … one can only wonder what would have happened if the Irish would have switched the date as well & played SC in October?

Ironic that NMSU has one of its best schedules in years when they are without a conference.

How they managed seven home games is beyond me. Just incredible!

I don’t know how they tricked Boston College into visiting them in November. That’s the most incredible part of their schedule.

Yep whoever does their scheduling has earned a huge raise, 8 home games including BC, Rice,Minnesota, SD ST. Incredible. If you live in or near Las Crusas you have to buy season tickets with a schedule like that. What helps them is their proximity to Texas, teams will play them and invite west Texas recruits to see them. Las Crusas much warmer in November than Boston.

Idaho as well, how they got the NIU Huskies(one of my fav teams) to do a home and home with them is beyond amazing. They also got Temple to travel 3K miles from Philadelphia to Idaho! Temple is a much better team than what their record indicated from last year. Per Rivals they have the best recruiting class in the AAC in 13. Heck many Idaho and NM ST should stay independent if they can schedule like this!

The SEC has its share of dogs, whether you want to admit it or not. Take away all those wins over FCS and Sun Belt schools, and what’s left? 4-6 more teams that wouldn’t be bowl eligible. In other words, the SEC is overrated because of their TV contracts with CBS and ESPN, whereby those two networks overhype the SEC in order to get better ratings. That being said, Notre Dame would have an easier schedule if it played in the SEC or any other conference and played the same schedules those conference schools play. And that’s a fact, jack.

Purdue ain’t jack! But I will take the compliment about adding BYU and the etc at the ‘end’ of the schedule! And may that said game be a huge loss for the home team! :) OOH RAH!

Notre Dame has a hell of a lot tougher schedule then majority of the big -10 especially the way over ranked ohio state they start their season playing shall I say….high school teams haha…. instead of nd joining a conference why doesn’t all the other over ranked teams buck up and actually play decent teams…just sayin

gippy29gary: The past, whether recent or distant, has nothing to do with the present because football teams and schedules change EVERY year. Comparing the entire SEC to Notre Dame is like comparing a herd of bulls to one Thoroughbred stallion. And the SEC only has all those teams in the rankings because they vote for each other. Rankings don’t mean diddlysquat. They’re no better than voting for homecoming queen in high school. At least computers take most of the emotion out of rankings. Once again, the SEC builds its rep on the bodies of FCS, schools, Sun Belt schools, C-USA schools, and MAC schools. Let them play the schedules USC and UCLA play every year and see how they stand up. Neither of them has ever played an FCS school since D-1 was split in 1-A and 1-AA – just like Notre Dame.