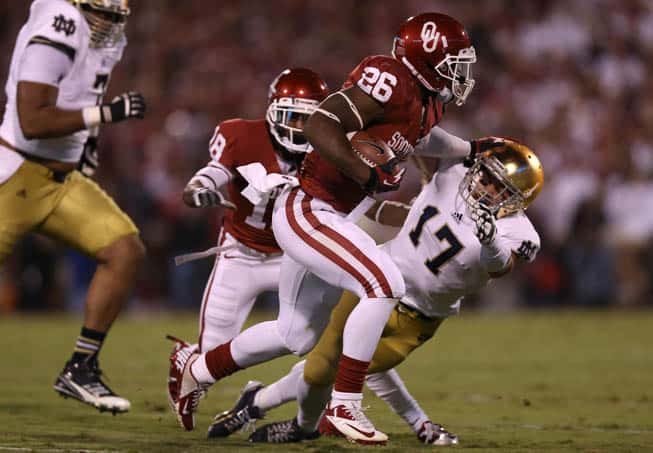 We head east in our non-conference schedule rankings as we tackle the Big 12 — or ten, whichever you prefer — and rank them from least to most challenging. The strength of a few mid-major teams definitely shaped these rankings a little more so than the Big Ten and the Pac-12.

With each team playing only three non-conference games due to playing everyone in the league once, it’s a little easier to gauge which schedules stand out from the rest. One thing to take into consideration is that some of these teams will play a conference opponent sandwiched in between two out of conference games, which could add a little bit of difficulty. With that and mid-majors in mind, let’s get to it.

Going to Gerald J. Ford Stadium is the highlight of this tune up run for the Red Raiders. SMU can be tough to beat, especially with June Jones calling plays. However, Texas Tech should be able to handle the Mustangs and routed Texas State 58-10 last year in San Marcos. With that being said, the Red Raiders should be able to handle all three of these teams, even with TCU being sandwiched in between the Lumberjacks and the Bobcats.

The first marquee team — or name — pops up on the list with the Mountaineers visit to Baltimore to play the Terrapins of Maryland. It seemed that the Terps were using their kicker at quarterback last year at some points because they had so many injuries. Although Maryland will be better, that assumption alone isn’t enough to move them past ninth in this ranking. Georgia State holds no merit at home, and William & Mary should be an easy victory for this high powered offense. Geno Smith or not, West Virginia should be able to go 3-0 with this lack-luster slate.

This schedule tops the previous two just because ULM is a program on the rise and plays absolutely fantastic in the non-conference. This is the same team that took two SEC schools to overtime last year, beating one. Also, the Warhawks only lost by five to Baylor last year in Monroe. Buffalo doesn’t exactly fit the #MACtion bill of high flying offense and exciting football, but they’re a little better than Georgia State and Texas State. This slate isn’t blockbuster, but it edges out the previous two.

ULL will easily be the most challenging game in this stretch as they are a nine-win team from last year. UMass could get overlooked as Texas will be looming large the week after, but Kansas State should be able to handle the Minutemen within well … minutes. One of the hardest and most interesting games of the non-conference slate is against the North Dakota State Bison. This could be a scary tuneup game. With the loss of Collin Klein, the upperclassman-loaded squad of NDSU could surprise the Wildcats. They’ve got to at least have a chance. The Bison are going for their third straight FCS title this year. Actually, I’ll go ahead and say it…KSU goes 2-1, with a loss to NDSU.

Scheduling two Conference USA teams should make for an easy cake walk, right? Wrong. Rice actually beat Kansas last year at Memorial Stadium and now the Jayhawks have to go to Houston to try for revenge. Louisiana Tech is no slouch either. If there’s one thing to know about Louisiana Tech it’s that they score … in bunches. Louisiana Tech led the nation in total offense last year with 577 yards per game. Better than the likes of Baylor, Texas A&M, and Oklahoma State who were 2nd, 3rd and 4th, respectively. We also know this about Kansas: they are horrible on defense, ranking 113th. If Kansas wants to be anything better than 1-2 headed into conference play, they have to outscore their opponents.

In the nine slot we said one opponent wasn’t enough to warrant moving up, but that’s because Maryland is in a down period. While they should be better, we’re not sure how much better. Mississippi State is a very solid team, and that has been displayed in Starkville. Legitimately, Mississippi State is more formidable opponent than Rice and Louisiana Tech. UTSA should be no contest for the Cowboys even though it is in the Alamodome. Not only is Lamar a FCS school, they are a bad one. Lamar played two FBS programs last year. They were outscored by a total of 94-2. I guess there most have been a holding call in the end zone at some point.

These next four schedules are all pretty deserving of a top five ranking. Iowa State plays Iowa year in and year out and they will continue to be the Cyclones premiere out of conference opponent. The sleeper on this schedule is going to Tulsa. As last year’s Conference USA champions, the Golden Hurricanes know how to win. Iowa State was one of two Hurricanes’ losses last year. The Cyclones were also one of Tulsa’s 11 wins as the Hurricanes got revenge with a 31-17 victory in the AutoZone Liberty Bowl. Iowa State has to play pretty solid to go undefeated in the non-conference this year, and I just don’t see it happening. 1-2 isn’t too far fetched, and that’s the way it will play out.

Texas cracks the top three in the conference with the second half of their home-and-home with Ole Miss, and traveling to Provo. The Longhorns routed the Rebels last year in Oxford, but the Rebels still have talent. There’s no doubt they are a formidable opponent. This year should be a little closer, but expect Texas to come out with a victory. Playing in Provo is never an easy task and back-to-back games versus physical teams could take it’s toll on the Longhorns. I still predict the Longhorns go 3-0 and carry a lot of momentum into conference play.

SMU is a frequent guest on Big 12 schedules, as we’ve seen. There’s no need to break them down again. The gem on this slate is obviously playing LSU in Cowboys Stadium. The Bayou Bengals last regular season non-conference loss? At the hands of Virginia Tech in Lane Stadium in ’02. I see that streak continuing, unfortunately for the Horned Frogs. Major Kudos for TCU stepping up to play the best of the best though.

There will probably be an uproar that this schedule is number one overall, but the overall slate proves the toughest in the conference. ULM is the easiest game on this slate, and that’s saying something. We’ve covered ULM: great out of conference team. We’ve covered Tulsa: Conference USA champions and an 11 win team from last year. We’ve also covered Notre Dame, a team that Oklahoma lost to last year in Norman and is an off season removed from a national championship game performance. Top to bottom, this is the toughest schedule in the conference.

Lumberjacks in Texas? You do realize that East Texas has hundreds of thousands of acres of timber? That they sell to the rest of the world? And that SFA is located in East Texas?

He meant it more of a joke on the state of Texas as a whole. But we are going to edit that out because those familiar with that area know the meaning.

Piney Woods Conservation Center is the location of Stephen F. Austin State University\’s College of Forestry summer campus. It is a campus/dormitory setting in the Angelina National Forest with complete lodging, dining and classroom facilities. The Center is open year round and welcomes traveling forestry and environmental classes. Field trips and sites available in local industry, forest and nurseries. Extensive list of consultants, U.S. Forest/Corps of Engineers, state agencies and other forestry related personnel for speakers and programs.”

LSU is a way tougher than Notre Lame

But Tulsa is tougher than SE Louisiana, so it balances out.

There was an episode in of Malcolm In the Middle in which Malcolm got to take the hottest (and dumbest) girl in school to a HS football game.

she actually asked “How come the Visitors team gets to wear different color uniforms every week”. The joke as that she didn’t realize that “The visitors” were actually a bunch of different teams.

You know, sort of the same way Clayton treats each and every FCS team.

Not EVERY FCS team. Did you read the Kansas State breakdown? There’s a difference between the good schools and the bad ones, and I think I recognized NDSU as a school going for their third straight championship. Wofford made a deep playoff run last year, but William and Mary is not up to par with either of those programs. There is, without a doubt, a drop off in talent.

1. Texas
Playing at BYU is always tough and Ole Miss has tons of talent.

2. TCU
LSU in Texas (Neutral) and SMU home are still tough games
(If this LSU game was in Baton Rouge I would vault them to #1. But BYU’s defense is top 10 and with elevation and on the road, I have to give SOS to Texas, as much as it hurts)

3. Oklahoma
@ Notre Dame has a lot of talent coming back and Tulsa’s offense is legit

Should be a 1st place tie in my mind. LSU has a longer recent history than 1 year like Notre Dame. But the LSU game is in TCU’s back yard (Jerry World) while Oklahoma has to travel to South Bend. In my mind SMU=Tulsa and for TCU SMU is a rivalry game dont forget. LSU > Notre Dame. But ULM > Southeast Louisiana.

And I would actually make a case for Texas to have the toughest non conference schedule. NMSU was one of the 10 worst FBS in 2012. But lets be honest that is equal to playing most FCS or Sun Belt Teams. But Texas plays 2 formidable opponents 1 at home Ole miss and 1 road BYU. Ole Miss finished 7-6 in the toughest division in cfb the SEC West Last year. While BYU was 8-5 in 2012 they were an injured quarterback away from being a 10 or 11 win team again. And remember Texas beat BYU 17-16 in Austin in 2011 after a 2nd half comeback.

Show me another conference that has more other than the SEC playing each other. That is the way college football gets scheduled.

Texas will lose to Ole Miss, and to BYU in a close game. The Horns should have an easy win against NMSU though.

playing before touch down jesus will be awesome if OU rb’s run wild. defense will be young and untested. #1 schedule

Clayton is spot on. If your a college football fan, then the opening 2013 game on National TV with NDSU Bison is going to be made for TV moment STATEMENT game how good this team is! IF your a real college FB Fan then you respect a team with 2 national titles back to back and not done yet. This Bison team will expose a KSU from graduates and will shut down the KSU offense and will show the nation its the Bama of FCS football.