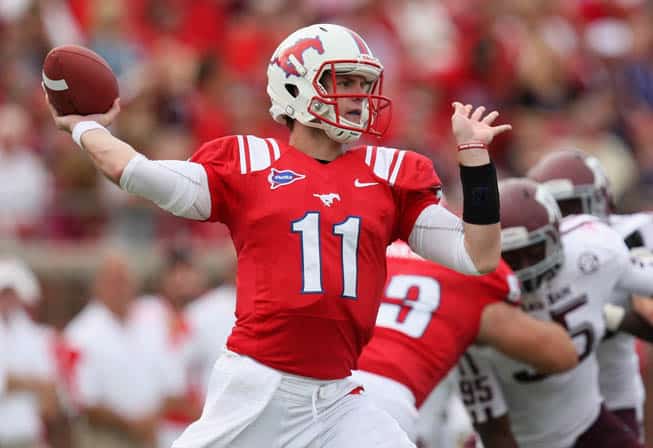 We make another effort at ranking the 2013 non-conference football schedules, this time focusing on the American Athletic Conference. Check out the Big 12, Big Ten, and Pac-12 rankings while you’re at it!

BYU is the toughest game on the slate, but that’s no knock. Going on the road — if you want to call it that — to Reliant Stadium to play the Owls of Rice could be a test for the Cougars, but they handled that match-up well last year. Again, BYU is a good game. However, I think this schedule needed a bit more depth to it in order to move up.

It was tough to put a schedule with two Big Ten teams this low. As we’ll see in a second though, it’s not all about names. Illinois won two games last year, and Purdue went .500 in the regular season. To add to that, Cincinnati bludgeoned the four-win RedHawks last year. Adding FCS foe Northwestern State does nothing but hurt this campaign. I see three wins though, as either Purdue or Illinois will improve enough to challenge the Bearcats.

This is a perfect example of two mid-major teams that are the key elements to a decent non-conference schedule. Arkansas State is a ten-win team, and Middle Tennessee got snubbed of a bowl last year after declining an invitation. These two teams actually played each other in the Sun Belt title game last year. From 2011-2012, MTSU was the most improved team in the nation from a record standpoint. Those two solid squads are accompanied by Duke, who also made a bowl last year. All in all, this schedule doesn’t have the big name, but it’s better than some we’ve come across.

This is where things get tricky. SEC schools usually carry a lot of weight because they are just that – SEC schools. On the contrary though, Kentucky only won two games last year. You can’t live off of the name forever. I know this is a rivalry game, I get it. Louisville is just better as of late and is going for three straight against the Wildcats. The team that Louisville needs to look out for, and actually the team that holds this schedule up, is Ohio. The Bobcats slipped a little bit at the end of last year but they are still a very solid football team. It’s simply going to be a match-up of Ohio’s offense against Louisville’s defense. The Cardinals went undefeated in the non-conference last year, and they should do so again.

Remember how we said just because it’s an SEC school doesn’t mean anything? Case and point, again. Arkansas won a measly two games in the SEC last year, but one of those was against the aforementioned Kentucky Wildcats. That, coupled with the fact that Fresno State and Eastern Michigan combined trump Ohio and FIU, is what put the Scarlet Knights above the Cardinals. Rutgers beat the Razorbacks last year. Let’s see if they can do it again now that the program is a little more stable. If Rutgers can come out of this unscathed, they will have tons of momentum headed into the conference schedule.

If you’ve read out other schedule rankings, we’ve covered Maryland. They are in a slump right now, and that really hurts the teams that scheduled them now who expected them to be a solid opponent. I think Maryland will rebound this year, but we can’t assume that and give this schedule more credit than it deserves. Connecticut did, in fact, beat Maryland last year. The Huskies easily have the biggest home game of all the teams on this list when the Wolverines come to town. Connecticut didn’t fare to well the last time Michigan was their opponent, suffering a 30-10 defeat in Ann Arbor during the 2010 season. Buffalo coupled with Maryland isn’t quite enough to push this schedule up any farther, though it’s close.

The appearance of a visit to South Bend bumps Temple into the top five. Outside of that the Owls shouldn’t be tested. The reason this schedule made it to this spot is simple – one great road game is more of a challenge that any combination of decent games. Opening the season on the road in an environment like that is going to test Temple, and they get credit for that. Temple should come out of this stretch 3-1, with the Fighting Irish being their only loss.

I think the top three in these rankings is pretty cut and dry. Traveling to East Lansing is never an easy task, as Spartan Stadium can get pretty rowdy. This is a winnable game for USF, talent wise, though. Couches could be set ablaze in East Lansing. We’re going to ignore McNeese State. We probably should ignore Florida Atlantic, too. Why, you ask? The Owls played two FCS teams last year. FAU won one of those — by 4 — and lost the other. The Bulls should be prepared for their visit from the Hurricanes since they got dismantled on the road last year. The Bulls needed their non-conference slate last year to get two of their three wins, and they might need it again this year. 2-2 is probably reality after this slate.

This schedule was extremely close to being number one but my gut instinct said it was slightly easier. Having one-win Akron visit, and then going to play in front of the whopping crowd of 23,500 at FIU Stadium just didn’t push this one past SMU. While Going to Happy Valley really holds some merit, the lack of quality from the two opening games combined just don’t stack up against our number one schedule.

Everything is bigger in Texas, especially the non-conference schedules. One thing is for sure – SMU likes to keep it local. Texas Tech and Texas A&M are both bowl winners from last year. TCU would have been a bowl winner, but the Horned Frogs lost to Michigan State by a grand total of one point. The thing that makes this schedule stick out a little bit above the rest is back-to-back road games at Kyle Field and Amon G. Carter Stadium. Usually I let a schedule slide for an FCS appearance, but the quality of the other three games keeps this one right at the top.

Do FIU really have 23, 000 fans to attend their game lol. I don’t think so. Seeing them on TV it looked like a high school game.

MSU fans have never set couches ablaze for a non-conference home win against the team outside the Top 25. Why would you expect them to start now?

Just a little humor is all, Bill. That’s all.

Newbie commenting on this site, but been looking at this site daily for years. Comment on nearly all sports sites though.

May not be couches that burn but , the team will burn g if they lose to my Bulls . :)

Just a couple of changes that I see on this list.

I moved Houston up because BYU is better then any single opponent that Memphis or Louisville play. Memphis plays 2 Sun Belt an FCS and Duke and they rank 8 I have them at 9. Similarly Louisville plays 1 Sun Belt 1 MAC an FCS school and Kentucky. I am not slighting the MAC or the Sun Belt because there are some quality teams in those conferences. but that is how I rank them.

Thanks for your opinion! That’s the beauty of these rankings; It’s really hard for everyone to agree and that could spark some fun debates.

But you did not explain why you moved UCONN ahead of Temple. Surely, playing at ND is a bigger challenge than playing Michigan at home.

UCONN is fifth, Lonestar. Temple is fourth. Meaning that the Owls’ schedule is tougher.

lousiville ???? those game look so easy to win, is it toughest or easies, none of this teams are though Ohio
Eastern Kentucky, Kentucky, Florida International

This counts down from easiest, to toughest. U of L being the 7th toughest.

men this must be a joke!

So long as Maryland doesn’t have to start their tight end at QB like last year, I can’t see any way they don’t improve, especially in a weak ACC.

I couldn’t agree more, Andy. I try not to assume anyone will be better or worse when writing these though. If I did, a lot of these rankings would look very, very different.

UC has to move up on the list by playing two B1G schools.

SMU is definitely #1 and would have had a much more difficult schedule but dropped Baylor at the last minute for Montana State.

Forgot about that. Would have been one of the toughest in recent memory.

I think SMU,s O.C.S. would rank in the top 25 overall among all conferences .

Rutgers is in there because of the dismantling of the old Big East. Next year they play Nebraska, Penn State, Ohio State, Michigan, Michigan State
for starters