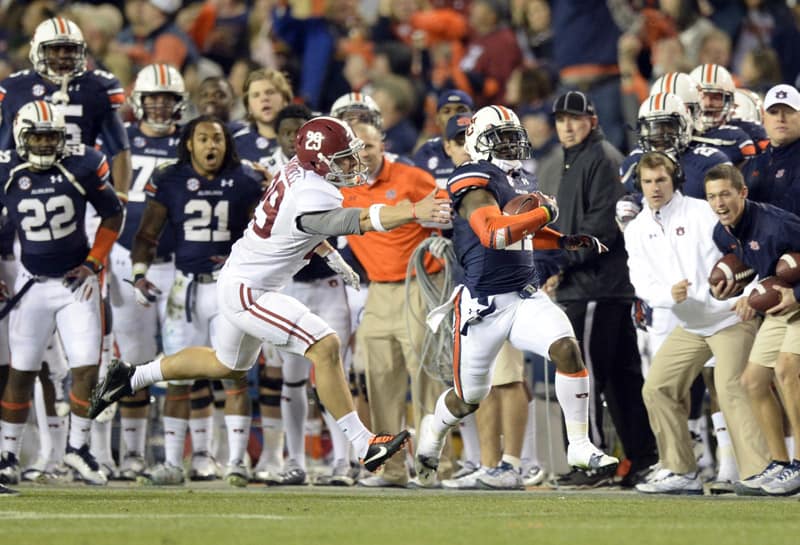 Look deep into the soul of any college football fan and you’ll find inscribed, in bold letters, the name of a team that needs to be beaten for the purpose of revenge. Only a win, preferably a stomping, will eradicate the foul name of the opponent, scrawled late one fall night after a gut-wrenching loss.

In the words of a Latin Proverb, “Revenge is a confession of pain.”

So, while there are plenty of teams that will need to beat certain teams in 2014, which squads—and their fanbases—are desperate to score a win over a certain special someone to heal a wound that’s still festering from last season?

Here’s a look at only nine of the hundreds of possible combinations.

Fresh off a 56-7 beat down of New Mexico State in the 2013 opener, the Longhorns were ranked No. 15 coming into their Week 2 road trip to face BYU. It was still early enough in the season to believe that both Texas and Mack Brown would reassert their authority over college football.

Despite being seven-point favorites, the Longhorns gave up 679 yards of offense to the Cougars, ultimately leaving Provo stinging with a 40-21 loss. Suddenly the team that should have been, could have been, 5-0 coming into its Oct. 12 showdown with Oklahoma was 1-1 on Sept. 8.

The 2014 rematch, scheduled for Saturday evening, Sept. 6 in Austin, sets up an eerily similar scenario. Yes, it’s a chance—again—for Texas to declare “we’re back” but this time with a new coach, Charlie Strong, who wants to prove that he’s the guy to return Longhorn football to its lofty perch.

For BYU, on the other hand, it’s an opportunity to show the world that it’s no one-hit wonder.

In 2013, Fresno State was just one regular-season win away from becoming the final BCS buster. Yes, all the No. 16 ranked Bulldogs needed to do was to beat 5-6 San Jose State, win the Mountain West title game, and be the fly in the BCS’ last jar of ointment.

What happened instead was the eight-point underdog Spartans allowed 41 first half points and then held the Bulldogs to only 11 in the second to pull off a stunning 62-52 upset.

In minutes, Fresno State went from being invited to the BCS money dance to becoming the next team from the Mountain West to be relegated to the Las Vegas Bowl. As for Bulldog quarterback Derek Carr—who led the FBS in passing yards and touchdowns—it meant a drop to No. 8 in the Heisman vote.

Though the rest of the nation might not tune in, Fresno State fans will be chomping at the bit for some good, old-fashioned retribution on Saturday, Nov. 8 when they host San Jose State at Bulldog Stadium.

While it was one thing for Top 10 ranked LSU to get beat by No. 9 Georgia and No. 1 Alabama last season, getting smacked in the mouth by unranked Ole Miss was another thing entirely.

Zach Mettenberger threw three picks and the Rebels hung up 525 yards on the Tigers in the shocking 27-24 loss which ended with a dramatic 41-yard Andrew Ritter field goal as time expired. It was LSU’s first lost to an unranked team since 2009 when the Tigers fell 25-23 to guess who, Ole Miss.

The 2014 version of the ongoing series is set for Saturday, Oct. 25 in Baton Rouge.

Even though Duke’s 10-win season and first ACC Coastal title in 2013 were uber-impressive, it’s still not enough to make Virginia Tech fans feel good about dropping a game to the Blue Devils for the first time since 1981.

And remember, the Hokies were ranked No. 16 when they faced Duke last season—12-point favorites playing on their home turf, where they had never lost to the Blue Devils.

Not only was it embarrassing, the 13-10 defeat could have been avoided if Virginia Tech quarterback Logan Thomas could have managed to throw even one fewer interception, he served up four. Think about it, Duke won the game even though it went 0-11 on third down and had only 198 yards of total offense.

Virginia Tech will get a chance to make things right when it travels to Durham on Saturday, Nov. 15 to reassert its authority in the ACC Coastal.

Before last season’s Big 12 championship run, Baylor hadn’t won a conference title since it shared the Southwest Conference crown in 1994. It’s last outright title? Well, that was 34 years ago in 1980.

Despite the glory that was 2013 in the land of Sic ‘Em, the Bears magical season was actually upended by their Nov. 23 loss at Oklahoma State. And this just wasn’t any little loss, the No. 11 Cowboys smacked No. 3 Baylor with 34-second half points for a 49-17 beat down.

And as much as Bears fans can console themselves with a Big 12 title, the truth is they wound up one-half short of the school’s first-ever national championship appearance.

The rematch between the two conference foes is scheduled for Saturday, Nov. 22 in Waco.

While everybody remembers Auburn knocking Alabama out of the SEC title game in dramatic fashion, who remembers when unranked Tennessee did the same thing to South Carolina?

Well, that was also last season when the No. 11 Gamecocks marched into Knoxville as seven-point favorites and handed unranked Tennessee its first win over a ranked opponent in 19 tries.

Though South Carolina had lost to No. 11 Georgia earlier in the season, its double-overtime win at No. 5 Missouri the next week would have launched the Gamecocks into its first SEC title game since 2010.

South Carolina will get a chance to exact revenge on Tennessee on Saturday, Nov. 1 in Columbia.

Stanford’s losses to both USC and Utah in 2013 meant even a win over a one-loss Oregon team couldn’t secure a place in the Pac-12 title game.

No, it would take an additional conference loss by the Ducks to propel the Cardinal over Oregon—precisely what happened on Nov. 23 when Arizona blasted the Ducks 42-16.

Think about it: The Wildcats were unranked, 18-point underdogs playing No. 5 Oregon—the team that hadn’t fallen to an unranked squad since 2009 when it was outlasted by Stanford 51-42.

Oregon will be heavy favorites to represent the Pac-12 in the College Football Playoff in 2014, standing it its way will be a Thursday night, Oct. 2 grudge match with Arizona, this time in Eugene.

No matter what else happened in college football, if Ohio State would have won last season’s Big Ten title game, it would have played for a BCS championship.

So, as sickening as Michigan State’s 14-unanswered points in the fourth quarter were and as bad as every one of the Spartans’ 438 total yards of offense hurt, the worst part of the outcome for Buckeye fans was a late night change of travel plans—from the national championship game in in Pasadena, Calif. to the Orange Bowl in Miami Gardens, Fla.

The plot thickens with the 2014 rematch between Ohio State and Michigan State—slated for Saturday, Nov. 8 in East Lansing—because the two will meet for the first time as members of the new Big Ten East division.

While the grudge match won’t be in the Big Ten title game, it will likely decide which team gets to go.

As triumphant as Chris Davis’ 109-yard return of Alabama’s missed field goal as time expired in last season’s Iron Bowl was for Auburn, it was a punch to the gut for Alabama.

Remember, the Tide were 11-0 at the time, ranked No. 1 that night—as they had been all season—and primed to win another SEC title and national championship. That is, until the Tigers tied the game with 32 seconds left to go and then won it on one of the most bizarre plays in college football history.

The loss was so devastating that it followed Alabama to the Sugar Bowl where it was manhandled 45-31 by a young but talented No. 11 Oklahoma team. It was the first back-to-back losses for the Tide since the final two games of the 2008 season, when they fell in the SEC title game to Florida and then lost to Utah in the Sugar Bowl.

The 2014 rematch, slated for Saturday, Nov. 29 in Tuscaloosa, will have it all—two top-ranked schools who already hate each other, one playing for retribution and both looking for another title.

Glad to see Bama vs Auburn at #1. With both teams coming back in top 10 hopefully this year the game will live up to the hype!

A very-much under the radar game might be Penn State-Indiana. Hoosiers ran away with a bewildered Penn State team last season. Now, with Hackenberg a sophomore, Penn State returns to the scene of the disaster in Bloomington this season looking for some payback.

Would agree and I will be there to see that one in person. But, let’s not forget Penn St.’s opener with Central Florida. That is a more visible payback game.

Honestly I’m surprised BYU-Texas is the lowest on the list considering all the off the field turnover caused by that loss, the embaressing records, and the focus that the new coaching staff has on this game. It became pretty obvious at Big12 media days that BYU is currently target #1 for the Longhorns.

Interestingly it is the only non conference game on the list.

I agree that BYU vs. Texas should be higher on the list, but at least they didn’t put Michigan vs. Notre Dame at number one this time. ;)

How can you leave out Georgia vs Auburn?!? I STILL have nightmares about that game!!!

Thanks for including the SJS and Fresno on this list…this used to be one of the best regional rivalries on the West coast….the Spartans have won the past two….I think a win this year would make this game a circle the date on the calendar on FSU’s schedule.

FSU is Florida State, I know they are both FSU but when you say ND do you think North Dakota?

When I hear FSU, I think of Fresno State. Not Florida State. Go ‘Dogs!

Oregon is primed for Arizona’ football this year at Autzen . After Arizona not only beat Oregon with an injured key player… but Arizona’s fan base went too far with attacking the Oregon fans. Arizona fans are the worst sportsmanship fans in the nation. They not only poured liquids over the Oregon fans during the game, but punched out a 72 year old man in the rest room who was doing nothing. During the game, the Arizona fans grabbed cameras and cell phones from Oregon fans (women and small boys and girls) pushed Oregon fans down, and rudely insulted fans with cursing comments for young children to hear. They deserved to win the game in that they played well…but their fans are the worst in the nation to visitors. Arizona comes to Oregon this year, and Oregon will greet them well with dignity and love of the game. It is sad to see such great schools like Arizona stoop to such horrible fan behavior.

I’m a big Duck fan Harley and I can’t wait for the payback. Thanks for the info.

I would nominate this year’s match between Minnesota @ Nebraska as a revenge game. That was an EMBARASSING loss for the Cornhuskers.

I’m sorry but any list not including App St at Michigan is just bogus. That one game put Appalachian St on the map and made Michigan the laughing stock of BCS football that year. I would think payback would be sweet for Michigan!

How could I have forgotten Appalachian State @ Michigan!?!

Yeah, I expected to see that or the Utah game at number 1.

What about Notre Dame vs. Michigan? That game is very important

What about OU seeking revenge for their loss to the Longhorns?????

All revenge will be given except Michigan State will beat Ohio State.

Yea, it’s July and everyone is undefeated. Come November 29th, I doubt Alabama OR Auburn will be. Certainly BOTH will not be 11-0. I even doubt that both teams still have a chance at the SECCG. Ole Miss & LSU will definitely have something to say about that. Alabama will arrive for the Iron Bowl sporting a 9-1 record while Auburn will be 8-2. Both will still be highly ranked but titles will be out of reach