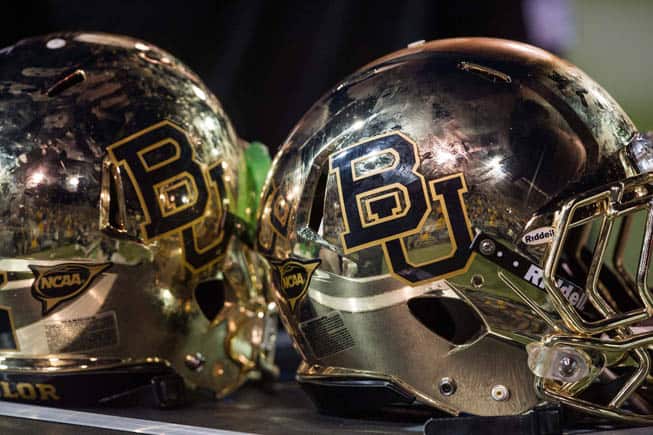 Baylor has a string of tough games coming up. (Jerome Miron-USA TODAY Sports)

Who doesn’t love a mid-season schedule ranking? They’re easily one of our favorite things to do here. Right behind targeting and Lane Kiffin, they might be the best thing to happen to college football, ever.

Only one team that was featured in our pre-season version of the toughest schedules is currently ranked in the top ten in the BCS Standings: the Missouri Tigers. Hopefully we don’t jinx any more teams. Insert “we are not responsible” disclaimer here.

Among the criteria used for the rankings: Remaining games against ranked opponents, locations of games and of course the good old eye test of the remaining opponents.

Baylor tops this list for a few reasons. The biggest, in my opinion, is that all three of their ranked opponents — Oklahoma, Texas Tech and at Oklahoma State — are back-to-back-to-back. Baylor has scored seventy points in all but two games this year — they scored 69 against Wofford — and the Bears defense is one of five in the country to hold opposing teams to under one hundred total points. This schedule will put that to the test.

Another spot, another Big 12 team. You’ll see a trend here, as all the top teams in that league still have each other on the schedule. With Texas on the rebound and having to travel to Norman to take on the Sooners, this schedule got a boost with the Longhorns “resurgence”, if you will. Baylor looms large, but Texas Tech should worry about getting through back-to-back games against the Sooner State, starting with Oklahoma this weekend.

The first non-Big 12 team makes its appearance! Oregon has a showdown with UCLA then travels to Palo Alto to play a team that has had their number. Utah and Arizona haven’t exactly been slouches this year — Utah DID beat Stanford — and then closing the year with the Civil War against an Oregon State team that is hitting on all cylinders should be fun. All that adds up to the number 3 spot.

Back to the Big 12, as the Cowboys take the number four spot. A showdown with undefeated Texas Tech separates traveling to Iowa State and Kansas. The last three games of the year will show how good this team is, as they travel to Austin followed by contests against Baylor and Oklahoma to close out the year.

This is the last team from the Big 12, I promise. Oklahoma’s schedule is top-heavy the rest of the way. They play two of their remaining three ranked opponents back-to-back which includes a Thursday night showdown with Baylor. Iowa State is their last home game as they close out the year against Kansas State and then Oklahoma State for Bedlam in Stillwater.

The SEC beating up on each other has caused this schedule to fall a little more than originally thought. A banged up Georgia team in the World’s Largest Outdoor Cocktail Party — yes, I still call it that — is never an easy task. Then Vanderbilt — who always plays the Gators tough — and South Carolina build the hype before finishing the season against what might be the best team in the country: FSU. The Gators are still fighting for a bowl bid, and none of these games — aside from Georgia Southern — will be a ‘gimme.

UCLA’s schedule shows up for one reason, mainly. Not one on the schedule can you chalk up as a “W” with no doubt in your mind. They have the big showdown in Autzen with Oregon, of course. Then you look at the rest of the schedule and games at Arizona, against Washington and Arizona State are not going to be easy with the parity in the Pac-12 this year. With the resurgence of USC post Lane Kiffin, the end of the year clash in the City of Angels should be a tough draw as well.

Stanford’s schedule is like that of Oklahoma’s, meaning that their toughest games are not at the end of their schedule but the next two weeks. A showdown with a surprise Oregon State team that can put themselves in the thick of the BCS with a win and then hosting the Ducks is really going to show us who Stanford is this year. California squeezed in between USC and Notre Dame is a breath of fresh air, as the Golden Bears are having a down year. Traveling to the Coliseum though won’t be a picnic.

LSU grabs the next to last spot in our rankings, and an FCS team prevents them from going a little higher. Furman gave the Florida Gators a challenge in 2011, but that’s won’t happen here. The big part of this schedule is traveling to Tuscaloosa on Nov. 9 for a chance to ruin Alabama’s run and then hosting Texas A&M after a bye week. On a short week, LSU then hosts Arkansas on Nov. 29 to play for the Golden Boot.

Michigan has a bye week, followed by a showdown with Michigan State then the Wolverines host Nebraska. Michigan State is 6-1, and flaunts one of the best defenses in the nation. After the Spartans, Michigan travels to Evanston to play a disappointing Northwestern team. The big one though is against Ohio State. Regardless of the Big Ten’s reputation, two tough rivalry games — one being against an undefeated team — and a Taylor Martinez led offense doesn’t make for an easy road.

Nevada stinks and Idaho State is an embarrassment to the sport. Notre Dame and Wisconsin on the road would be 2 huge wins and a ticket to the BCS would be in order as long as they win out.

How about Tennessee? They play the top 3 teams in the SEC over the next 3 weeks and then get Vandy. Kentucky is awful, sure, but the rest of their schedule is very tough.

Oregon and Arizona State on the road plus USC, Washington and Stanford doesn’t make the list? The Beavs might have the hardest schedule of anyone, certainly top 10. BYU belongs too. You wouldn’t know that the Big 12 is having an obviously down year from this list jeez. Stick to scheduling news.

We give our writers the freedom to rank as they seem fit. If given the chance, I’m sure others would rank differently. Please take that into account.

Those writers are drinking too many Pepsi’s if they ignore SJSU remaining schedule…22-15 including a rugged match-up with Fresno State. Big 12 my big toe.
Hope Georgia pounds the Gators!

I agree with those saying BYU should be on this list.

BYU should be on a lot of lists. Sophomore Taysom Hill should be in the discussion for the Heisman for what he did against Texas, Georgia Tech, Utah State, Houston (Houston just took Rutgers to the woodshed), and now Boise State… The dude has brought the QB back to Quarterback U. It’s a shame it took them a few qeeks to get the new offense straightened out.

That’s should be “weeks” (typo) and BYU is going to have their hands full at Wisconsin and Notre Dame but no doubt they’re not afraid to take on some good teams. Houston and Boise no doubt have shown they’re pretty good and BYU outclassed them. Texas got stomped by BYU and then stomped Oklahoma. It’s nice that BYU is willing to play anyone. In 2015 they play at Michigan and at Nebraska. Gutsy but we’ll have a senior Taysom Hill!!

BYU in no way “outclassed” Houston. That game was an epic war…the very best college football has to offer. 47-46 with the winning score occurring with a minute left is not a case of being ‘outclassed’. The BYU-Texas game = outclassed.

Consider using a thesaurus in the future before posting nonsense.

Who ever wrote that list is giving the big twelve way to much credit for being good teams. They are equal to conference USA if u ask me and yes Oregon states schedule ranks at the top. Baylor is the only quality team in the big twelve but of course will have to wait till the bowl games to really see how down the big twelve really is this year!!

I could be wrong but it appears the list was meant to include only those teams in the running for a BCS spot. No one cares if California has a hard schedule.

I agree with Layne

Mississippi State’s remaining opponents have a record of 28-12 including, South Carolina, Texas A&M, Alabama and Ole Miss. I don’t know if it is the hardest remainng schedule but it is certainly within the top ten.

Just about everyone is going to, or wants to, think their favorite team has the toughest schedule left so they can crow about it when they win! Who says the Big12 is down? Oh yeah, the media, whom most of you despise until they may say something you like. Most teams have at least one bad day and so far OU’s was against Texas, who most of you say they are resurging if your favorite team still has them to play. Baylor is a beast this year, except against KSU. OU has lost once and are ranked 10th and Baylor is 6th. OSU and Texas Tech have lost once and are ranked. WVU, TCU, KSU, and ISU are down a little but, the rest of the Conference is doing well. It’s only natural that fans want certain schools and Conferences to do bad and their favorite teams and the conference it is in to do well! There are only so many top 10’s! Sit down, like the writer, and make yours! You just don’t like the fact he gets to have his published and you don’t, and since yours isn’t and his don’t match yours, you get pissy about it!

Big 12 has always been one of the best through the years!!! However losing Mizzou, Texas A&M and Nebraska has definitely brought this conference down. No way West Virginina and TCU are presently in the class with those three universities. I like the Big 12 but I believe they have fallen back to the pack. Maybe they will be back as an elite conference in the future. Things often change from year to year and they still have some very good teams.

Guess it was just another bad day for OU. Just for kicks nobody’s pissy player just pointing out facts about the big twelve. Brice petty is the only elite quater back in the conference maybe stoops should just keep his mouth shut about sec defense when his team can’t stop a sneeze. Lmao RMFT