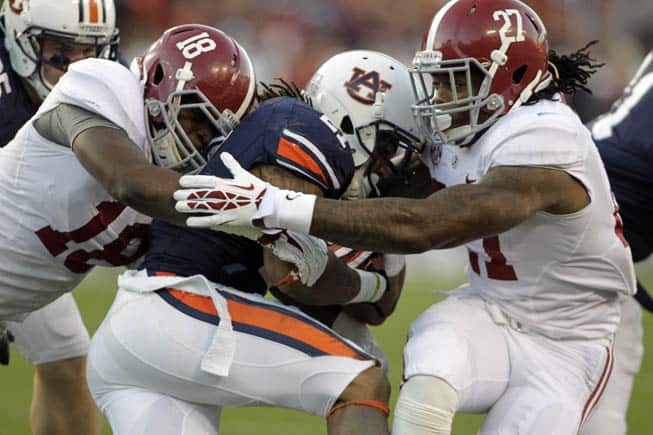 “Almost” doesn’t hold up a trophy. That said, the SEC almost (there’s that word again) continued their streak of BCS championships, before Florida State finally overtook Auburn and won it all. This result aside, the conference will definitely be back in the national conversation early and often in 2014, despite the wishes of many.

Straight ahead, we’ll take a look at ten conference games you need to add to your Outlook calendar, phone or whatever, so that you’ll be sure to be near the couch. The games are listed in chronological order for your viewing pleasure. Get the snacks and beverages ready…here we go!

It’s hard to believe these two powers have never faced off, and what a way to break the seal on their time as opponents in the SEC. Sure, there’ll be no Johnny Football on the Aggie side, and Jadeveon Clowney has also moved on. The cupboards are nowhere near bare for Kevin Sumlin and the HBC, though. Dylan Thompson will take over under center for the Gamecocks, while A&M has a number of contenders to man the quarterback role. Can South Carolina continue their string of recent success in getting a great pass rush without Clowney, Kelcy Quarles and Chaz Sutton? Can A&M stop anybody after finishing last in the conference in total defense in 2013 and being torched by Duke?

We just talked about South Carolina’s losses, and we need to focus on Georgia’s leader moving on. Aaron Murray has used up his eligibility, and Hutson Mason looks to take over as the leader of the Bulldogs’ offense. Mason’s senior leadership will be key, having done a reasonably successful job of filling in for Murray after his 2013 season-ending injury. Mason completed 67-of-110 passes for 968 yards, throwing for five touchdowns against three picks. Todd Gurley will be back to test the Gamecocks’ rush defense, and electric playmaker Malcolm Mitchell should be available for Mason after an injury cost him the 2013 season. Jeremy Pruitt comes over from Florida State to take over the Georgia defense, a change with which many Georgia fans seem elated.

The first meeting for these teams in four seasons finds a somewhat down Gator program heading to Tuscaloosa. The Tide were, as everyone knows, a second away from playing for yet another national title before finishing the season with a relatively inconsequential bowl beating by Oklahoma. Meanwhile, Will Muschamp finds himself firmly on the hot seat in Gainesville after a 4-8 season, including a loss to FCS opponent Georgia Southern in the Swamp. Florida State transfer Jacob Coker will look to take over for graduated ‘Bama quarterback A.J. McCarron, while Florida faces more questions after Jeff Driskel’s backup, Tyler Murphy, announced he would transfer.

This historic rivalry tees up its 44th edition in September, with Butch Jones in his second season at the helm in Knoxville. The Vols appeared to be on a collision course with a bowl game last season, before a four-game losing streak — three of those games to top-ten teams — derailed those hopes. Tennessee will be without Raijon Neal, but they have dual quarterback threats in Justin Worley and Joshua Dobbs. Marlin Lane and Pig Howard also offer big-play options in Jones’ offense.

Many likely thought Auburn’s hopes of playing for a title were gone with their two-touchdown loss to LSU in 2013, though we now know this was not the case. Zach Mettenberger has moved on, as we know, but new LSU quarterback Anthony Jennings looks to guide the Bayou Bengals to victory on the Plains. Auburn will be without Tre Mason, but there are still plenty of backs in the Tigers’ stable. Corey Grant and Cameron Artis-Payne will look to conquer LSU’s stout run defense.

Alabama fans remember the 49-42 victory last season against the Aggies. They also remember the 29-24 loss two years ago that put Johnny Football on the map. We’ve already talked about both teams in this piece, but one thing is for sure. Alabama fans want Auburn the most, but they’d take a beating of the Aggies, too.

The Tide own three consecutive victories over the Tigers, including the BCS National Championship game in 2012. Amazingly, though, Alabama is just 6-7 against LSU in their last 13 games. The times have not been announced for these games as of yet, but one has to imagine that it will be a Saturday night affair. Saturday nights in Death Valley are magical, and this one would figure to be no different.

LSU owns three consecutive victories over the Aggies, with the last two coming in SEC play after the 2011 Cotton Bowl. The Tigers had lost the previous five meetings, though, between 1991 and 1995. This will be another gigantic test for the A&M defense, as LSU looks to punish and wear down opponents. Playing at Kyle Field may be an advantage for the Aggies, but if LSU jumps out to an early lead, it could get ugly in College Station.

Mississippi State was in serious trouble last season. At 4-6, the Bulldogs looked to be headed toward a lost season with no bowl game. Two overtime wins later, though — including one over Ole Miss to close the season — and Dan Mullen’s troops escaped disaster. This shapes up to be a tremendous quarterback battle between Dak Prescott and Bo Wallace. Laquon Treadwell, Evan Engram and Robert Nkemdiche should be at full-strength for the Rebels, which will give them a decent crack at getting revenge for last season’s result.

Let’s be honest — what can we say about this game? One second. The Iron Bowl. The Plains. Tuscaloosa. Toomer’s Corner. The Bear Bryant statue. You know everything you need to know about this game, and Gus Malzahn insists that the Iron Bowl trophy will stay in Auburn. Alabama fans beg to differ. It’s way early to guarantee this will be the case, but there is a good possibility that this game will play into the national championship race again.

Before anyone mentions this, there are way more than ten games to see on the 2014 SEC slate. Limiting this to ten games is akin to trying to choose your favorite child or decide whether you would rather visit The Bahamas or Hawaii on vacation. 2014 is going to be yet another amazing year in the SEC, friends, and we at FBSchedules look forward to watching along with you!

Some interesting games here with the usual powerful teams.Surely,we will all have to get to know some new names,but history tells us that the cream rises to the top in this conference,and there is a lot of cream.I have Alabama returning to their perch on top,with Tennessee being a sleeper.Roll Tide!

None of your top 10 games feature the defending Eastern Division champion? Interesting.

Exactly. I think mizzou will be an interesting team to watch.

Roll Tide. The SEC is going to beat the shit out of itself this year. Should be great.

I’d trade the Egg Bowl for Vandy—Tennessee. Volunteers are not happy about getting beat twice in a row for the first time in 90 years, especially with the way that the Commodores took the lead in the last 16 seconds. Given that it’s in Nashville this year… it’s going to be crazy in that stadium. Anchor Down.