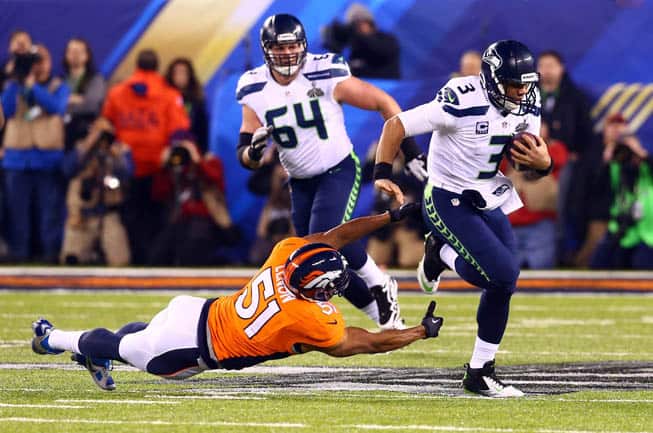 The 2014 NFL season is right around the corner! Here are the Top 10 NFL games you won’t want to miss this season, including a Super Bowl rematch and a Thanksgiving night game at the new Levi’s Stadium.

After a surprising win against the Broncos at Super Bowl XLVIII last February, the Seahawks will have a chance to prove their title wasn’t just a lucky break. The Broncos will also have the opportunity to redeem themselves after losing an embarrassing 43 to 8. With the NFL’s best teams for defense and for offense sparring once more, this game is sure to be highly watched.

Considered the best rivalry in the NFL this season, this Thanksgiving day game will have football fans on the edge of their seats. The game will be played in the 49ers new home, Levi’s Stadium, and the outcome may decide who has the home field in the NFC playoffs.

DeSean Jackson’s return to Philly after being forced to leave the Eagles makes the list as one of the most anticipated NFL games this season. Now playing for the Redskins, Jackson will certainly want to show Eagles coach Chip Kelly that he made a mistake in cutting the wide receiver from the highly-ranked team.

With quarterbacks Tom Brady and Peyton Manning both reaching the late stages of their careers, they might not have too many chances to face off again, making this game a must-see for fans. While the Broncos won against the Patriots last season, they lost to the them during the AFC Championship Game. Both players and fans hoping for revenge could make emotions run high.

In what’s sure to be an emotional rematch for Peyton Manning after losing to Indianapolis last year, a team who cut him in 2012, the Broncos will start fighting for the AFC title with a renewed defense. Quarterback Andrew Luck, who had helped strike down the Broncos winning streak, will now take his team to Denver in this face off between what will most likely be a couple of the top teams in the AFC this season.

In Week 17 last season, quarterback Aaron Rodgers helped the Packers take the title for the NFC North with a 48-yard touchdown in the last minute. However, the Bears have revamped their team, adding Jared Allen and Lamarr Houston, while former Bears pass rusher Julius Peppers joins the Packers. As one of the NFL’s oldest rivalries, this is sure to be an exhilarating game.

Bucs coach Lovie Smith will be returning to Chicago after being fired by the Bears in 2012, despite being the only coach besides Mike Ditka to have taken the Bears to the Super Bowl. On his side, Smith has former Bears quarterback Josh McCown, who must also hope for a triumphant return and a chance to trump his old team.

The last time the Patriots went against the Packers was in 2010 in Foxborough. Aaron Rodgers was injured at the time and Matt Flynn, who filled in for him, couldn’t get in a play. But this time it will be quarterbacks Rodgers and Brady squaring off.

These two teams last met for a Thanksgiving game that was as close of a win as it was controversial. Steelers coach Mike Tomlin was fined $100,000 after the game where he interfered with Jacoby Jones’ kick return. Despite the interference, the Ravens scraped by with a win when Emmanuel Sanders’ dropped the ball after Ben Roethlisberger set up a 13-play, 79-yard drive. The two teams have been fairly competitive in recent years with the majority of their last 14 games being won by less than four points.

The Cowboys have something to prove in this Week 17 game after losing to rival teams and letting the NFC East Championships slip away for the past three seasons. However, it will be young against old as Cowboys quarterback Tony Romo and Redskins quarterback Robert Griffin III face off in this playoffs-like game.

Since when did Eddy Lacy play for the Patriots?

This must be asked: why is the Broncos @ Seahawks game not the season opener or a Sunday Night Showdown? It makes no sense that the rematch of last season’s Super Bowl is relegated to being the main game at 4:25 pm et on CBS in Week 3.

Bengals vs Broncos outta be interesting broncos best offense vs bengals 3rd defense and the bengals were 8-0 at home last year, this could be top 5 game if the year, its also Monday night football

A Bengals game will never be a top 5 or even 10 game of any year so long as they dont win the big one.

T.Hamm said…..
GO COLTS……TRUE BLUE THROUGH AND THROUGH
WE ARE SO UNDERESTIMATED AND NOT BEING RESPECTED AS A THREAT a MAJOR CONTENDER FOR THE SUPERBOWL. THE X’s and O’s will espresso just that.

GO PATRIOTS…….THAT IS WHY YALL GOT YALLS ASS BEAT BY THE PATRIOTS.

That picture is not of a game that Seattle hosted but Super Bowl 48. Cant you see Seatlle is wearing an away jersey?

I do believe the cowboys won the NFC East last year