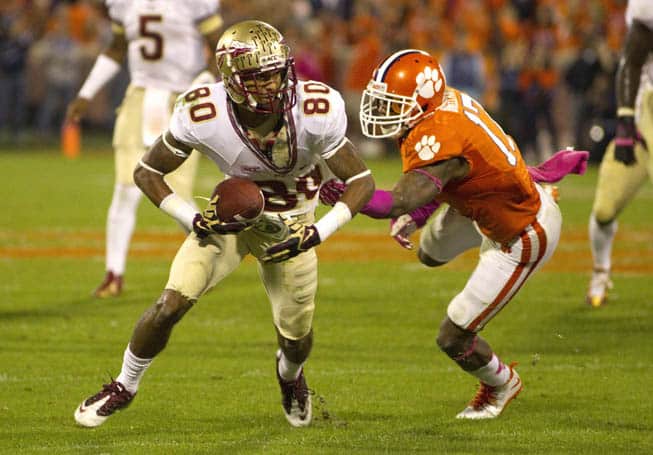 The ACC produced some quite interesting results in 2013. Duke won ten games, Virginia lost ten and Florida State marched through the conference undefeated, only to bring home the crown in the final BCS National Championship Game.

As we move toward the 2014 season, there are new teams (Louisville), new coaches (the Cardinals’ Bobby Petrino and Wake Forest’s Dave Clawson) and new storylines. We’ll see which ACC clubs get to compete in the new playoff system, but before we do, let’s take a look at ten of the conference games that you need to see next season. The games are listed in chronological order for your viewing pleasure.

The Cardinals don’t exactly get a soft landing into conference play. The ‘Canes will make the trip to western Kentucky to welcome Bobby Petrino to the ACC. Neither Stephen Morris nor Teddy Bridgewater will be under center for their respective teams. Miami running back Duke Johnson will look to recover from a catastrophic injury to team with Dallas Crawford to bolster Al Golden’s running game.

The Hokies lost their quarterback after last season — more on that later — but the more important focus for this contest is on Georgia Tech losing theirs. Vad Lee transferred out of the program, stating a lack of fit with the option offense. The Jackets are just 3-8 against the Hokies all-time, and Blacksburg is a tremendously tough place to try to break a streak. Without Lee and graduating running back Robert Godhigh, this is a tough way to begin conference play for the Ramblin’ Wreck.

The Tigers will look to avenge the beating they suffered at the hands of the Seminoles in Death Valley last season, a game that went a long way toward establishing FSU as a national title contender. Though Tajh Boyd, Sammy Watkins, Martavis Bryant, Roderick McDowell and more present large losses for Clemson, Cole Stoudt provides veteran leadership under center, and the cupboard is hardly bare for Dabo Swinney’s club. Kelvin Benjamin and Kenny Shaw are gone from Tallahassee, but the defending champs have Heisman winner Jameis Winston and the crowd at Doak Campbell Stadium, two tough obstacles to navigate.

There’s no more Bryn Renner and Eric Ebron in Carolina blue, but there are still plenty of playmakers for Larry Fedora. Sophomore quarterback Marquise Williams effectively led the Tar Heel offense in Renner’s absence last season, and wide receiver Ryan Switzer showed himself to be both an effective receiver and kick returner in his freshman season. Carolina pass rusher extraordinaire Norkeithus Otis will look to take up residence in the Clemson backfield. The Tar Heels are just 8-19 against the Tigers since 1980, however.

The first ACC game for new Demon Deacon coach Dave Clawson comes on the road at the home of the conference’s newest member. Wake experienced their share of struggles in 2013, and they have a decent non-conference slate to start the 2014 campaign. Games at ULM and Utah State and versus Gardner-Webb and Army at BB&T Field await the Deacs before they take the field in Louisville.

There is an interesting past between these two former Big East rivals. The Hokies lost the first 12 games played between the two, though they are 13-6 since that first win in 1995. Star quarterback Logan Thomas will be moving on to the NFL, so backup Mark Leal figures to have the first shot at the starting job. Virginia Tech had a relatively young defensive backfield in 2013, so this will be yet another chance to evaluate the group after a year of experience.

The first meeting between these two schools in 12 years takes place on a Thursday night in front of a national audience. The Cardinals feature 29 players from Florida on their roster, so that will be an interesting added storyline. Though many eyes will be on Petrino early in the season, this game could either mark Petrino’s triumphant return to the national stage or launch a running series of jokes on Twitter. Louisville’s team speed on defense will be tested early and often, and this is another group with something to prove.

After claiming the Victory Bell just once between 1989 and 2011, the Blue Devils have claimed two consecutive wins over their Triangle nemesis. Duke closed last season with a crazy Chick-fil-A Bowl loss to Texas A&M, and the Blue Devil defense that so mightily struggled to contain Johnny Manziel in that second half in Atlanta will need to continue their growth. Pressure will surely mount on Larry Fedora in Chapel Hill if the Heels lose three straight to Duke.

Once again, two former Big East rivals face off in ACC action. Syracuse coach Scott Shafer recently came under fire for calling Atlantans “softnosed” in the aftermath of the snowstorm that crippled the southeastern United States. The bigger issue for the Orange is losing eight of the last nine times they have faced off against the Panthers. Pitt will have yet another new quarterback in Chad Voytik, who completed 5-of-9 passes for 108 yards in the Little Caesars Pizza Bowl in relief of Tom Savage. Sophomore running back James Conner compiled 229 rushing yards in that same game. The Syracuse defense will need to contain a mobile quarterback and powerful run game to turn around their recent struggles against Pitt.

0-10. 1-13. Remember when we were all freaking out over Y2K and thinking our computer systems would never work again as the world spontaneously shut down? Virginia fans surely remember. Their team has defeated Virginia Tech exactly once since that period of hysteria. The Cavaliers’ horrendous 2013 season culminated in a sloppy loss to the Hokies in Scott Stadium, extending the school’s winless streak in the series to ten games. Fans were calling for UVa coach Mike London’s dismissal after the season, but the buyout for London and his assistants was too large for the university to swallow. With a schedule featuring ten 2013 bowl teams, this game in Blacksburg may be the final time London wears the orange and blue.

Some very interesting games there on tap in your piece.I notice that B.C. is absent,and with probably the best running back in the conference,they might should be in there.I also wonder about Va.They keep having really good recruiting seasons,but seem to be unable to turn them into winners.This will be a most interesting year to see if Fla.St.is really that good,or if the stars just lined up right for them the past year.
Really good job of picking games that could be the difference between major bowls,or staying home.

Williams (the back you mentioned) is off to the NFL, so he’ll be a non-factor for a BC team that will…well, let’s just call it as it is, will likely struggle.

FSU will be loaded again, but the question will be whether or not Clemson can catch them. That game being in Doak Campbell this year puts the odds considerably in the Seminoles’ favor again, though.

OK this is a joke right? besides FSU which pays more for it’s football players than any team except ‘Bama or maybe OSU, the rest of the ACCrier is a pretend basketball conference.

What are supposed to do, not play any games because you don’t like the conference?

NFL Draft: ACC-43, BIG-30,
Keep telling yourself that the BIG is not the bottom of the barrel. Massive enrollments do not equate to football prowess.

I think Va-Tech-UNC should have been on the list, I would remove the Louisville-FSU game.

On UVA, I think everybody can agree that it is difficult to win with a third string QB (which Watford was before Rocco and Sims left). For 2014, the way the schedule looks for UVA, bowl eligibility should be feasible.

Clemson has two difficult games and one is with UNC? That tells you plenty about the patsy schedule they play each year.

Clemson also plays Lousville, South Carolina, & opens the season at Georgia. Tell me again how they have a “soft” schedule?

rocketrodclub, clemson played 4 top ten teams last year and have two SEC out of conference teams(georgia and USC) scheduled for next year, we have played two SEC teams a year for 4 straight years for our out of conference games

Had FSU lost 1 game, they would not have played in the Final BCSNCG. They do play a little tougher schedule this year. If they can go undefeated on this schedule, they should be in the 4 team playoff. Again, they cannot afford to lose 1 game.