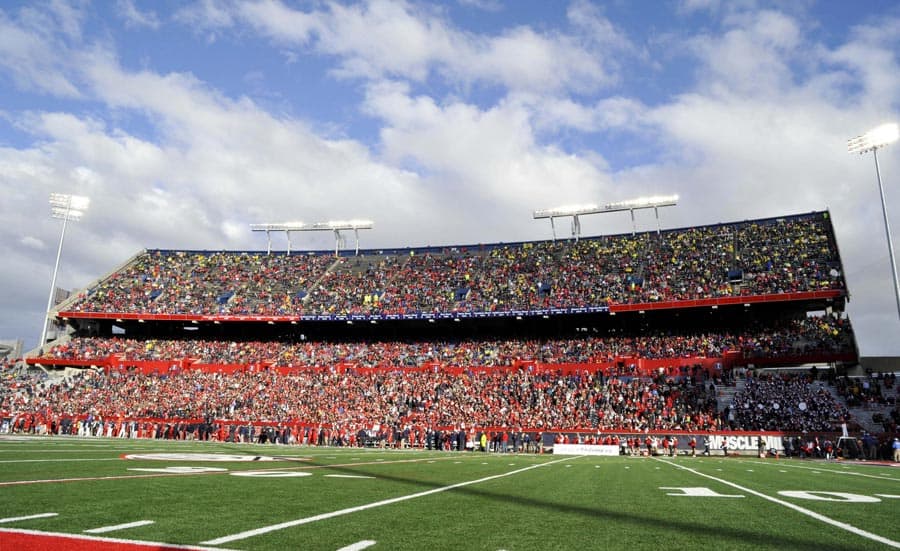 According to a report by ESPN, the NCAA has approved three new bowl games for the 2015 season. The bowls will be hosted in Tucson, Arizona; Austin, Texas; and Orlando, Florida.

That brings the total number of bowl games to 42 for the 2015-16 season, including the College Football Championship Game. Since two of the teams play twice, a total of 82 teams will be needed to fill all of the bowl and playoff positions.

With 127 teams (Charlotte is FBS transitional), that means 64.5% of the FBS will play in a bowl or playoff game after the culmination of the 2015 season.

There could have been 43 bowl games this season, but organizers of a bowl game in Little Rock, Arkansas reportedly withdrew their bid. That bowl would have pitted the American vs. the Sun Belt.

Below are the three new bowls and details for each, per ESPN:

Update: The Austin Bowl has decided to wait an additional season before starting. Therefore, there will be 41 bowls in 2015-16.

Might I suggest calling the bowl in Austin the Amy’s Ice Cream Bowl? Nothing says tolerating a frivolous collegian bowl than free ice cream!

Don’t watch it then.

I really don’t understand why people complain that we have to many bowls. You are not forced to watch. Why would you not want a couple more games in December? South Alabama and Bowling Green put on a show in the Camellia Bowl last year. I will watch as many college football games as I can. Don’t watch if you don’t want too.

Phil, I would have to concur. It’s all optional.

There are more bowls cause there are more teams going to FBS & conferences are growing. If there was no money in the bowls then they would stop producing them. I to will watch any bowl that is on TV if I have the time, they are fun & last year was a great bowl season.

My uconn huskies could get in with a losing record lol.

I’m not really sure why there’s a third Orlando bowl. Miami now has three (you could probably get rid of one of their new ones), Tampa Bay has 2, Jacksonville only has 1. Arizona now has three, and yet LA still only has one. I don’t know why there are bowl games in Detroit, Bay Area, Washington DC.
In these new bowls, it’s hard to say that the stadiums will be more than half-full. I think that any bowl that doesn’t have an average attendance of at least half the normal stadium size in the next four years should be extinguished.

Poo poo to you. Let’s let these young men have a fun trip and get to represent their school for one more game. Bowl game isn’t for you. I agree with Phil and Hawaii and PSU Dave, don’t like it don’t watch. I for one will watch every single game I can. I hate when college football ends.

It’s all about the destination. I’d go to San Antonio, Arizona, Florida, over LA. Who came up with the snow bowl in NYC??? Get those tourists to spend money, and enjoy themselves!!!

Los Angeles should add another bowl game pitting a PAC 12 or MWC Team vs an at Large Team, and 5-7 records by teams should not go to a bowl game. To avoid that 5-7 record, schedule an FCS school to open the season, and if you can’t beat them, then that school shouldn’t go to a bowl?

More teams are coming to the FBS and conferences are getting bigger. I don’t have a problem with putting 3 more bowl games in. They had some pretty exciting games last December.

i agree with most of you on here, THE MORE COLLEGE GAMES THE BETTER I LIKE IT, and if you don’t like it then DON’T WATCH IT!!!! I hate it when college season is over but enjoy the pro games also but when all football is over then tv is over, nothing on until baseball season starts!!!!

I enjoy watching ANY college football during the holiday months. My only request would be that 5-7 teams with ALL 5 wins over FBS teams get into Bowl games over 5-7 teams with wins over FCS teams. Other that that, sign me up for more games.

When will there be a Bowl in Flushing, NY?

That is funny… Dave Barry worthy

Why use 2 bowl games to decide who goes to the BCS. This does nuttin but cut other respective teams short. I understand the playoffs, but c’mon. Instead of using a bowl game make the top 4 play the week after the season ends, that way those two bowl games will be open fer teams deserving of them

They should do it similar too the NFL or since it’s College the teams record should put them there because OU always want too beat everyone and never loose when its your erra and your time you should be there let’s go Clemson Tigers the big 10 Needs two more teams too be the big 12 and get teams that are top contenders so OU won’t be able to just just run over them and that’s all i have too say about that.