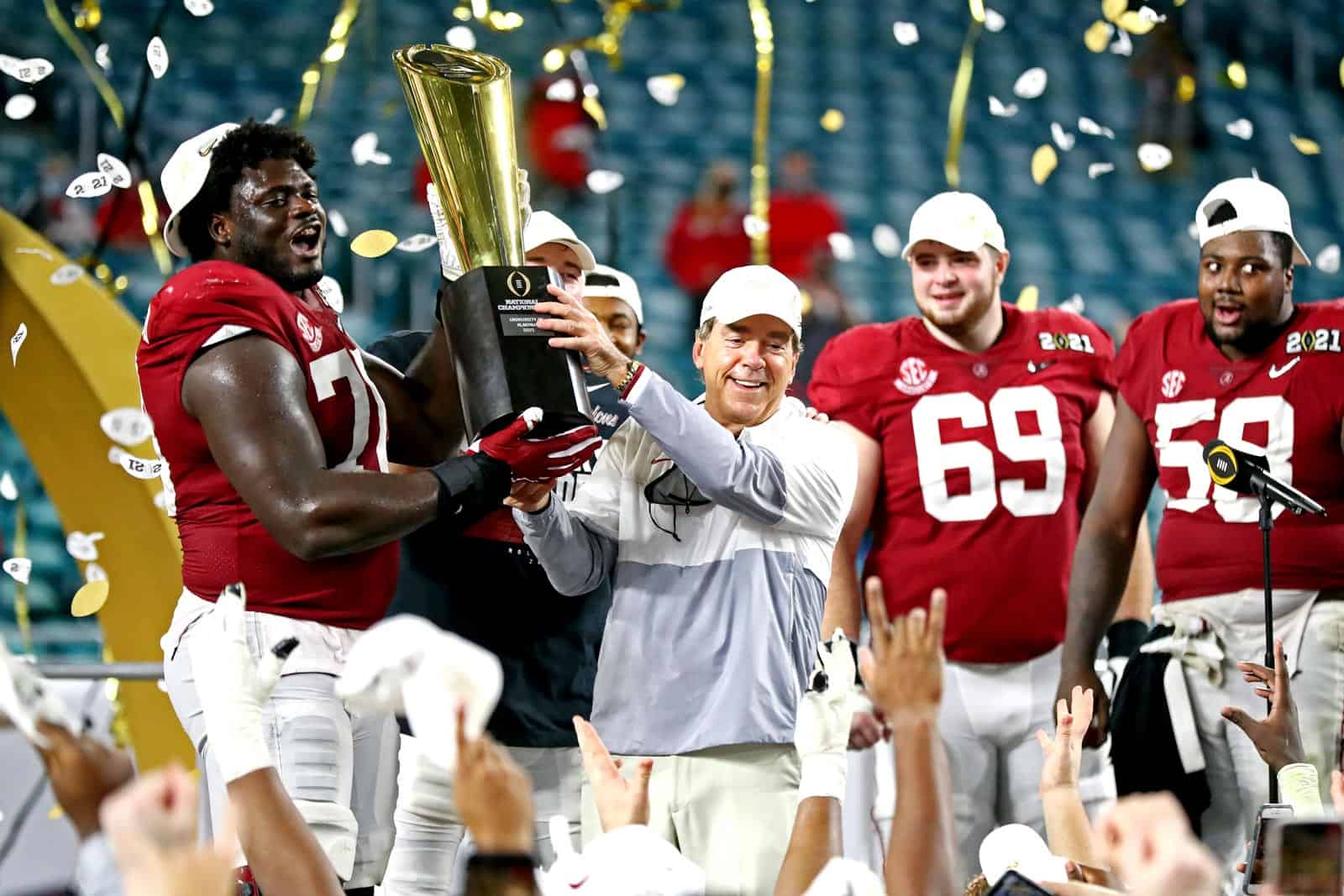 Thirty years ago, college football’s FBS national championship was shared by two teams – Colorado (the AP’s choice) and Georgia Tech (the Coaches’ Poll selection) in 1990 and then Miami Fla. (AP) and Washington (Coaches) in 1991.

This back-to-back occurrence led to a major turning point in college football – the creation of a scheme designed to identify the two best teams in the nation and thereby force a national championship game.

The first version of this innovation was the Bowl Coalition which lasted three seasons (1992-94). Next up was the similarly short-lived Bowl Alliance, which also lasted three years (1995-97), or until the Big Ten’s tie-in with the Rose Bowl cost (1) Michigan a place in the national title game.

That led to the now infamous Bowl Championship Series (BCS) which ran from 1998-2013. The BCS’s reign of terror ended in 2014 when the College Football Playoff (CFP) scheme unplugged the computers and invited actual human beings into a conference room to field an expanded four-team national championship mini-bracket.

Though there hasn’t been a shared championship in decades, the Bowl Coalition and its descendants transformed major college football creating an elite aristocracy that, until further revolution ensues, isn’t going away.

In the 29 seasons that have passed since 1992, the combined schemes have filled 72 precious slots to compete for a national title. The Bowl Coalition, Bowl Alliance, and BCS each picked two teams per year (that’s 44 selections in 22 seasons) while the CFP committee currently picks four annually (that’s 28 selections in seven seasons).

Of the 130 FBS teams (65 of which are considered “Power” programs) how many do you think have been selected at least once to fill one of the 72 slots?

The answer is a stunning 19. It amounts to – in almost three decades of on-field play – only 14% of the total field qualifying to compete for a national title and a paltry 29% of the Power 5 field getting an actual shot at a championship.

Florida State is the only program to have been invited to participate in all four schemes.

Of the 19, six teams selected hailed from the SEC. Three apiece came from the ACC (which includes Notre Dame’s 2020/21 selection), the Big 12 (a number that includes Nebraska, which made all its appearances before moving to the Big Ten), and the Pac-12. That leaves two each from the Big Ten, the Big East (both Miami and Virginia Tech’s appearances all occurred before they joined the ACC), and the Independents (Notre Dame in 2012/13 and 2018/19).

The fact that the Pac-12 (which had ten members from 1992-2011 and then expanded to 12) has only had five teams with a legitimate shot at a national championship confirms the existence of a bias against the teams that play in the Pacific and Mountain time zones.

What do the 19 chosen programs have in common that their fellow competitors do not? First up, all but four of these elite programs (or 78%) have averaged a Top 20 team recruiting rank (according to Rivals.com) since 2002. That’s almost twenty years of consistently welcoming in top ranked talent.

The exceptions – Nebraska, Washington, Virginia Tech, and Michigan State (which all held a Top 33 average over the same time span) – either had hot streaks that have since cooled or were a one-hit wonder, selected just once.

The other common thread is cold hard cash. It’s no coincidence that the four programs with the most selections (Alabama, Florida State, Ohio State, and Oklahoma) are all, according to USA Today, ranked in the Top 12 in total athletic revenues for 2019. All but one of the 19 elite programs rank in the Top 30 in revenues, with the lion’s share (74%) ranked in the Top 20. As a note, Miami Fla., Notre Dame, and USC aren’t included in these numbers. As private institutions, they adhere to different financial disclosure regulations.

While the CFP four-team bracket is an improvement (a fact illustrated by the inclusion of Michigan State in 2015 and Washington in 2016, selections that would have been a pipe dream in the earlier schemes), for everyone else, until further notice, it’s dreaming an impossible dream.

To make matters worse, it’s an uphill battle that appears to be getting steeper. While yes, there are four slots still available, the diversity of who gets picked is rapidly declining. To illustrate, of the 16 available bracket slots since 2017, 14 (or 87%) were awarded to the same five teams: Clemson (which went all four years), Alabama (three picks in four years), Oklahoma (also three picks in four years), Ohio State (two of four), and Notre Dame (two of four). The only two exceptions, in four full cycles, were Georgia in 2017 and LSU in 2019.

The message is clear – if you’re not in the SEC, it’s highly unlikely that you’ll find yourself playing for a national title in place of one of the current committee favorites.

While the plight of the 46 unselected Power 5 programs is unfortunate, the FBS achieves an entirely new level of inequality among the Group of 5 schools.

Given that the Bowl Coalition was founded by the five most powerful conferences in the nation in 1992 – the ACC, the Big 8, the Big East, the Southwest Conference, and the SEC – it, by its very design, created a class system in the FBS. At the top are the Power 5 conferences, their members, to varying degrees, have a clear path to the national title. At the bottom are the Group of 5 conferences, despite any fraudulent claims to the contrary, the best that the members of these leagues can hope for is to go undefeated and after a lot of chatter, qualify for a New Year’s Six Bowl. They will not, ever, in the current system, compete for a national title.

The most logical approach to righting both wrongs – providing a more equitable path to a national championship for all Power 5 teams and rewarding perfect seasons by Group of 5 members (and independents other than Notre Dame) with an actual shot at a title – is first expanding, and then locking down the qualifications, for the existing CFP bracket.

Smashing through college football’s elitist, glass ceiling means an eight-team bracket which includes the on-field champion from each Power league (no matter who it is), plus three at-large bids. Those bids would be guaranteed, in writing, to any undefeated Group of 5 champion but otherwise would be used to reward top ranked Power teams that did not win a league title.

Name another major sport which requires a team to win just two postseason games (up from the just one win that was required from 1992-2013) to be declared the overall national/world champion?

We can do better. And we should.

Completely wrong. If the Bowl Alliance/Coalition/BCS/Playoff is really what’s keeping Group of 5 schools from competing from championships, let’s look at how many championships those teams won before the Bowl Alliance started in the early 90s. How many? One. BYU. Of course, it would have been hard for many of the Group of 5 schools to compete for 1-A/FBS championships, considering that nearly 30 of them weren’t even members of 1-A/FBS at the time the Bowl Alliance was created. Only one of those (Boise State) has had any real impact at the FBS level. The Power 5/Group of 5 distinction is just the 1-A/1-AA distinction from early 90s. And it’s a useful distinction. The University of Toledo simply isn’t a comparable institution, athletically or academically, to Ohio State. Same for UAB and Alabama, or Coastal Carolina and Clemson. OSU, Bama, Clemson, and most of the other Power 5 members are huge flagship schools, with a few large and wealthy private schools. The Group of 5 are generally smaller, less academically prestigious state schools, or, in the case of UMass and some of the Mountain West schools, flagship schools from less populated states. That’s the reason for the disparity in revenue. OSU doesn’t have more revenue than Toledo because OSU fans just care more about football. Toledo has fans who care, too. It’s because OSU’s alumni base is much larger and more powerful. Again, the same goes for Alabama and UAB, Clemson and Coastal Carolina, even Kentucky and WKU or West Virginia and Marshall. Bigger schools do better. That’s not new. That’s why the NCAA split into divisions in the first place. And that – splitting FBS again into two more divisions – is the solution.

I have an idea for an 8-team bracket:

The four best teams from the South according to the final CFP rankings get seeded 1-4 in the Bowden bracket named for former FSU/WVU coach Bobby Bowden.

The four best non-Southern teams get seeded as such in the Osborne bracket, named for former Nebraska coach Tom Osborne.

The regional semifinals must be held, like the later rounds, at a stadium seating 65K or more, and not all P5 schools play regularly in a stadium that big, Those that don’t would play their home game at the closest stadium that does fit the capacity requirement.

The pairs of bowls that rotate as the semifinals would take turns being the Bowden final and Osborne final.

Had this system been in place in 2020, here are what would have been the regional semifinals:

So, an easy solution to implement beginning in 2026. Would potentially pave the way for more unique teams in the CFP.

I see two problems with your solution.
First, by making qualification dependent on conference games for Power 5 conferences, there is no incentive for teams to play challenging out of conference games. It is even worse for Group of 5 conferences where a single loss disqualifies the team from the playoff. Any team with a realistic shot at a Group of 5 championship will only schedule teams that they believe that they will defeat. There would be a substantial disincentive to schedule any Power 5 opponent.
Second, by promising all 5 Group of 5 conferences a spot in the playoff if their champion is undefeated, there is the possibility that 5 teams will be guaranteed to qualify for only 3 spots. That simply won’t work.

Yeah I don’t like the idea of the P5 getting handicap auto-bids, but the G5 having to produce an undefeated team. It either needs to go completely at large, or completely auto-bids.