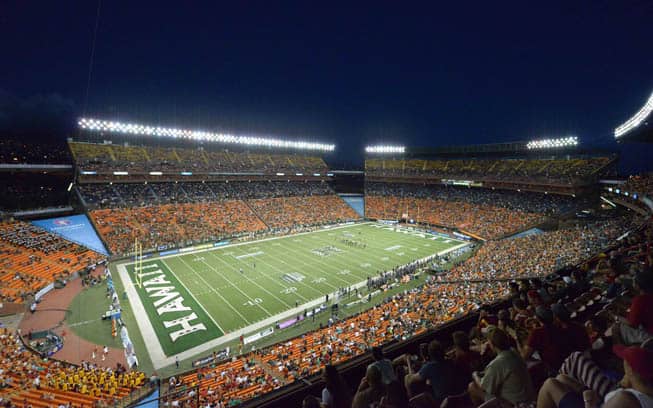 The Hawaii Exemption, as it’s commonly known, is a rule enacted by the NCAA that allows Division I football teams that play at Hawaii to schedule a 13th regular-season game. The rule also allows the Rainbow Warriors to play an extra game each season.

The addition of the 13th game, usually a home game, means extra revenue for those teams which is used to offset travel costs. But the teams involved are not obligated to schedule the extra game.

Of Hawaii’s 13 games scheduled in 2014, seven are at home. Listed below are each of their home opponents and their own “Hawaii Exemption” status:

Oregon State (12 games) – The Beavers opted not to schedule a 13th game and instead will have two open dates in 2014. Their other non-conference games are at home vs. Portland State and San Diego State.

Northern Iowa (11 games) – The Panthers opted not to schedule an additional game. Northern Iowa will actually play two less games than they are allowed because all FCS teams can play 12 games in 2014.

Wyoming (12 games) – The Cowboys elected to decline the exemption and will play 12 games in 2014. Wyoming’s four non-conference games are at home vs. Montana and Florida Atlantic and on the road at Oregon and Michigan State.

Nevada (12 games) – The Wolf Pack also will play only 12 games in 2014. Their four non-conference games are vs. Southern Utah and Washington State and at Arizona and BYU.

Utah State (13 games) – The Aggies took advantage of the Hawaii Exemption and will play 13 games. Their five non-conference games are at Tennessee, vs. Idaho State, vs. Wake Forest, at Arkansas State, and at BYU.

UNLV (12 games) – The Rebels opted not to schedule a 13th game and instead will have two open dates. UNLV’s non-conference schedule includes home games vs. Northern Colorado and Northern Illinois and road games at Arizona and BYU.

The NCAA Bylaws that govern the “Hawaii Exemption” are listed below (NCAA Division I Manual):

17.27.2 Alaska/Hawaii, Additional Football Contest
Member institutions located in Alaska and Hawaii shall be permitted to exceed, by one, the maximum number of football contests permitted under Bylaw 17.9.5.1 but otherwise shall conform to the same maximum number of contests and dates of competition permitted other members of the Association.

17.9.5.2 Annual Exemptions. [FBS/FCS]
The maximum number of football contests shall exclude the following:

Northern Iowa’s a strange one. Why would you only play 11 games?

In case they make the FCS playoffs because that could possibly be 4 more games. Essentially, they could be looking at an NFL schedule, numbers wise.

They had 12 games scheduled, but had someone back out of their game, so they’re kind of stuck

Stuck? Really? Looks like from this article that Oregon State, Wyoming, Nevada, and UNLV all have an open date. Of course UNI doesn’t want to be cannon fodder.

Some of these Mountain West teams could schedule each other in a 13th game contingent on not making the Mountain West Championship Game. In 2014, Nevada and Utah State did not meet during the regular season, and UNLV did not play Wyoming.