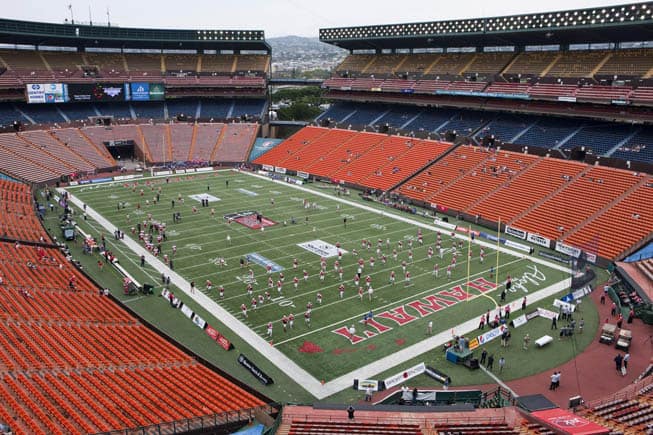 The Hawaii Exemption, as it’s commonly known, is a rule enacted by the NCAA that allows Division I football teams that play at Hawaii to schedule a 13th regular-season game. The rule also allows the Rainbow Warriors to play an extra game each season.

The addition of the 13th game, usually a home game, means extra revenue for those teams which is used to offset travel costs. But he teams involved are not obligated to schedule the extra game.

For the second year in a row, Hawaii has opted to only play 12 games. The last time Hawaii went two consecutive seasons without playing a 13th regular-season game was 2004 and 2005.

Of Hawaii’s 12 games scheduled in 2013, six are at home. Listed below are each of their home opponents and their own “Hawaii Exemption” status:

The NCAA Bylaws that govern the “Hawaii Exemption” are listed below (NCAA Division I Manual):

17.27.2 Alaska/Hawaii, Additional Football Contest
Member institutions located in Alaska and Hawaii shall be permitted to exceed, by one, the maximum number of football contests permitted under Bylaw 17.9.5.1 but otherwise shall conform to the same maximum number of contests and dates of competition permitted other members of the Association.

17.9.5.2 Annual Exemptions. [FBS/FCS]
The maximum number of football contests shall exclude the following:

Colorado State are the Rams.

LSU needs to use that rule and play Hawaii

What would LSU gain from it … other than another easy win? ….

The Colorado State Rams are playing the Colorado Buffalos in their non conference schedule.

I’m confused; is Colorado State using the exception or not?

Colorado was omitted from their list. CSU has five non-conference games.

Interesting article in the Honolulu paper about USC telling UH they will no longer be scheduling games in Hawaii. Seems to do so in a conference with a CCG means in a normal 14 week season you burn the only bye week playing a 13th game. http://www.staradvertiser.com/s?action=login&f=y&id=211942411

I just want to know: Have any FCS teams ever played 13 regular-season games?

If it’s happened, it was most likely an HBCU, since many of them forego postseason play for traditional end-of-season games or, in the case of the SWAC, the SWAC Championship Game. Usually most FCS teams don’t plaly more than 11 games because, should they qualify for the playoffs, their slate could potentially swell to 15 games or so. So, if you add Hawaii, an extra game due to Hawaii, and an “end-of-season rivalry”, or a conference championship game, that equals 13. I’m sure it has happened before, but I would think confirmation of that would be anything but straightforward.

No, the usual for FCS is 11 games but they can play 12 in years when there’s an extra Saturday

I have always assumed this was part of why BYU cancelled the BYU-Hawaii series as well. Once Hawaii was no longer available to play the first week of December, and with BYU having trouble scheduling the last week of November, there is no need to have 13 games to fit into 12 weeks. Better to scrap the weak opponent.

BYU did not cancel the series Hawaii did. Coach Chow did not wish to play BYU.

The exemption could be relevant again however if the NCAA would allow an extra game to be scheduled in Hawaii as the kickoff game on the weekend before Labor Day. Since championship week is unavailable there needs to be an extra week for this to make sense.

The other idea would be to push the Conf Championship games a week back a week to the 2nd weekend in December.

The NCAA has already shot down the idea of adding an extra week to the schedule. Both the SEC and Big12 asked after the NCAA went to a 12 game schedule.

So, would playing a 13 game schedule increase your chances of playing in a BCS Bowl and possibly having a one step up over everybody in the rankings?

More than likely, it would only help if the extra team you play is good.

I think Hawaii should seriously consider going Independent. They would not have to split the revenue from bowl games as they do now as a member of the Mountain West Conference. The travel costs are extensive for them even to travel to Southern California. They could schedule all their games on their own and probably beef up their schedule, maybe getting more national tv coverage if they schedule bigger games as an independent. If NMSU and Idaho can go independent, Hawaii can certainly make a persuasive case, from a geographic standpoint, why the NCAA should allow them to do so.

I actually agree with this. Now that they are in the MWC they are bound by the potential MWC Championship Game and can’t leave the December slot open for a 13th game. They could really try to go after some big-name teams and most likely wouldn’t have a problem getting them to come to Hawaii. The flip side of that is they could schedule 6 lower-tier or mid-major teams to try to assure themselves of bowl eligibility, also.