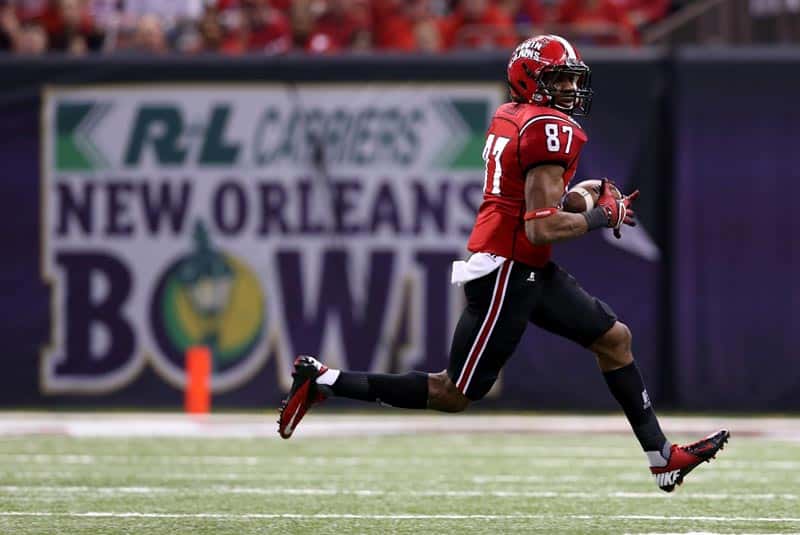 ‘Tis the season for lots of things, including 39 postseason college football games.

Bowl season kicks off this Saturday with five games, all on ESPN, meaning you won’t even need to change the channel to get all the action.

The best matchup of the day is Utah-Colorado State, two old Mountain West foes who have both been ranked this year.

We will continue to break down each and every bowl game right up to the National Championship game on Jan. 12, so keep checking in for who, when and what to watch this postseason.

For the most concise and visually-pleasing version of this year’s bowl schedule, check out FBSchedules’ 2014-15 Bowl Helmet Schedule. Print one for yourself and then share it with family and friends; it’s the gift that keeps on giving.

11:00AM ET, ESPN: R+L CARRIERS NEW ORLEANS BOWL: NEVADA (7-5) vs. LOUISIANA-LAFAYETTE (8-4) (Mercedes-Benz Superdome, New Orleans, La.): These two have met once previously, the 1995 season opener, a game Nevada won 38-14. This is a battle between two solid rushing attacks, one with a defense that has fared better against the run. The Ragin’ Cajuns are ranked No. 25 in the FBS in rushing yards and No. 44 vs. the run, while the Wolf Pack are No. 31 in rushing offense and No. 81 against the run. Check out Nevada quarterback Cody Fajardo (#17); with 997 rushing yards he’s the No. 4 rushing quarterback in the country. For ULL, keep an eye on running back Elijah McGuire (#15); as a sophomore he’s No. 38 in the FBS in yards per game (97) and has eclipsed the 100-yard mark five times including hanging up 265 yards and four scores in the win vs. Arkansas State. On defense, check out Ragin’ Cajun defensive tackle Christian Ringo, No. 7 in the FBS in tackles for a loss (19.5) and No. 12 in sacks (10.5). Nevada hasn’t won a bowl game since beating Boston College in the 2010 Kraft Fight Hunger Bowl, while ULL is on a three-game bowl winning streak (2011-13), which also represent the only three bowl appearances in school history.

5:45PM ET, ESPN: FAMOUS IDAHO POTATO BOWL: WESTERN MICHIGAN (8-4) vs. AIR FORCE (9-3) (Albertsons Stadium, Boise, Idaho): The first-ever meeting between these two, the Broncos’ only action vs. a military academy squad came in their 1985 and 1993 trips to West Point to face Army. Air Force’s option attack is No. 8 in the FBS in rushing yards, while Western Michigan’s ground attack features true-freshman running back Jarvion Franklin (#31), No. 3 in the FBS in touchdowns and No. 12 in yards per game (127.08). What may make the difference is this one is Western Michigan’s passing offense, ranked No. 37 in the FBS taking on the Falcons’ No. 101-ranked secondary, a unit which gave up an average of 318 passing yards in its last four outings. This group will be tasked with shutting down quarterback Zach Terrell (#11), ranked No. 5 in the FBS in passer rating (167.02). Only Marcus Mariota, Garrett Grayson, J.T. Barrett and Cody Kessler are ranked higher. On the flip side, check out Air Force strong safety Weston Steelhammer (#8), tied for the fourth most interceptions in the FBS (six). Western Michigan is 0-5 all-time in bowl play, last losing 37-32 to Purdue in the 2011 Little Caesars Pizza Bowl. Air Force hasn’t won a bowl game since beating Georgia Tech 14-7 in the 2010 Independence Bowl.

9:15PM ET, ESPN: RAYCOM MEDIA CAMELLIA BOWL: SOUTH ALABAMA (6-6) vs. BOWLING GREEN (7-6) (Cramton Bowl, Montgomery, Ala.): Another first-ever meeting, this is also South Alabama’s first-ever bowl appearance; the Jaguars started their football program in 2009 and were FCS Independents before joining the FBS Sun Belt conference in 2012. Bowling Green has struggled on defense this year, giving up 33.9 points per game (No. 107), while South Alabama has had difficulty finding the end zone, scoring only 22.1 points per game (No. 107). The strength-vs-strength matchup in this one is the Falcons’ No. 45-ranked passing attack taking on the Jaguars’ No. 32-ranked secondary. Check out Bowling Green receiver Roger Lewis (#1), a 4-star recruit from the class of 2012 who originally committed to Ohio; with 956 yards, he’s No. 30 in the FBS. For South Alabama, keep an eye on defensive end Theo Rich (#93); he’s tied for the 14th-most sacks in the nation (eight). Bowling Green has dropped four straight bowl games, last beating Memphis 52-35 in the 2004 GMAC Bowl.