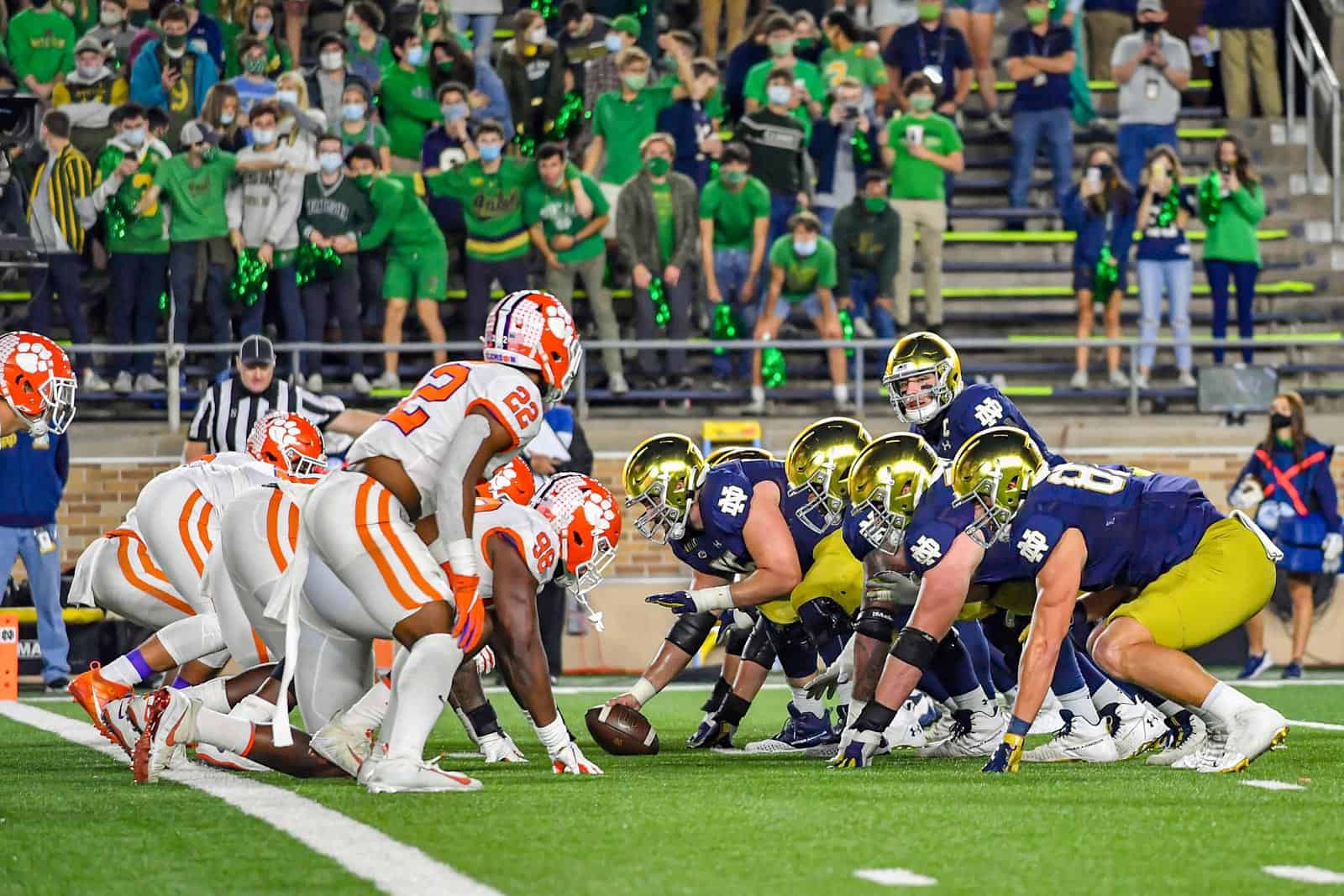 Of the top 31 most-watched games, the highest percentage were played during the month of October (14 or 39%). As far as time slot, the highest draw was split between the mid-afternoon (kicking off between 2:30-4:30pm EST) and primetime (7:00-8:30pm EST). The network with the most blockbusters was ABC which aired 11 (or 35%). CBS finished second with nine and FOX was third with five.

Due to the lack of non-conference action in 2020, all but one of the 31 most-watched games (Navy at Army) were in-conference matchups. The SEC led the way with 12, followed by the Big Ten with nine, the ACC with six, and the Big 12 with three. The Pac-12 didn’t make the list.

The individual program that garnered the most viewers was Alabama, which participated in six of the most watched games. Just behind the Tide – at four such games each – were Georgia, Ohio State, Notre Dame, LSU, and Michigan.

The teams mentioned the most in the top 11 most-viewed regular-season games (those with five million-plus viewers) were Georgia, Ohio State, and Notre Dame – with three such games each.

Michigan-Minnesota was the Big Ten’s first Saturday night primetime game in 2020. Its main competition was South Carolina at LSU, which aired 30-minutes earlier (at 7pm EST) on ESPN and drew 2.43 million viewers. That’s 2.69 million fewer than tuned in for the Wolverines and Golden Gophers. Michigan beat Minnesota 49-24.

What helped this matchup become must-see TV was a slew of Week 11 cancellations including (1) Alabama at LSU, (3) Ohio State at Maryland, (5) Texas A&M at Tennessee and (12) Georgia at Missouri. On top of that, (2) Clemson had a bye that Saturday. Notre Dame-Boston College’s biggest competition for viewers was USC-Arizona (it aired on the same time on FOX) which drew 2.21 million and Colorado Stanford (on ESPN) which pulled in a mere 826,000 interested parties. The Irish beat the Eagles 45-31.

The most-watched matchup in Week 8, Tennessee-Georgia out drew (7) Miami at (1) Clemson which attracted 4.61 million viewers on ABC in primetime. Its competition in the mid-afternoon time slot was a pair of games which both kicked off 30 minutes later (at 4pm EST) – Kansas State at TCU on FOX (2.36 million viewers) and Arkansas at (13) Auburn on ESPN (2.12 million). Georgia beat Tennessee 44-21.

This matchup was played the Friday after Thanksgiving, earning it the title of the most-watched, non-Saturday game in the 2020 regular season. Not surprisingly, it blew away its mid-afternoon competition – Stanford at Cal (4:30pm EST on FOX) which drew 1.75 million viewers. It did so well that it was the second-most watched game in a Week 16 headlined by the Iron Bowl, which was played that Saturday afternoon and drew just a half a million more viewers. The Irish beat the Tar Heels 31-17.

One of only two Noon games to make the top 11, Nebraska-Ohio State was the Big Ten’s first Saturday game of 2020 (Illinois visited No. 14 Wisconsin that Friday night). It’s main competition in the Noon time slot was Oklahoma at TCU on ABC (2.03 million viewers) and (23) NC State at (14) North Carolina on ESPN (1 million). It was also the most watched game in Week 8. The Buckeyes crushed the Huskers 52-17.

Despite being the sixth-most-watched regular season game in all of 2020, Florida-Georgia was only the second-most watched game in Week 10, outpaced by (1) Clemson at (4) Notre Dame which aired later that evening during primetime. The only real competition for viewers in the mid-afternoon time slot were Houston at (6) Cincinnati which aired at the same time on ABC (1.39 million viewers) and (14) Oklahoma State at Kansas State which kicked off 30-minutes later on FOX (1.92 million viewers). The Gators beat the Bulldogs 44-28.

Fox’s most-watched regular-season game of 2020 and the most-watched game in Week 12, Indiana-Ohio State drew two-million more viewers than Bedlam (No. 14 Oklahoma State at No. 18 Oklahoma) which was played later that same evening during primetime. The only real threat in the Noon time slot was (6) Florida at Vanderbilt on ABC, which attracted 2.02 million viewers. The Buckeyes outlasted the Hoosiers 42-35.

ABC’s most-watched regular-season game of 2020, Ohio State-Penn State was the only ranked vs. ranked matchup featured in Week 9. Its competition in primetime were a pair of ranked teams overpowering unranked opponents – Mississippi State at (2) Alabama which aired 30-minutes earlier on ESPN (2 million viewers) and (24) Oklahoma at Texas Tech which kicked 30-minutes later on FOX (2.12 million). The Buckeyes beat the Nittany Lions 38-25.

The Iron Bowl was the most-watched game in a stacked Week 13 (Thanksgiving weekend) which included (2) Notre Dame at (19) North Carolina (as detailed above). Its nearest competition in Saturday’s midafternoon time slot was Pitt at (3) Clemson on ABC (3 million viewers) and (8) Northwestern at Michigan State on ESPN (2.55 million). The Tide blasted the Tigers 42-13.

CBS’s most-watched regular season game in 2020, Georgia-Alabama was one of only two matchups to draw more than seven million viewers. Not only was it the first Top 5 matchup of the year it was played a full week before the Big Ten finally kicked off its season, meaning there were more viewers available. The nearest competition in all of Week 7 was Louisville at (4) Notre Dame which kicked at 2:30pm EST – it drew 3.12 million viewers, six million fewer than the Bulldogs and Tide. The only other attraction during primetime was (5) North Carolina at Florida State which aired 30-minutes earlier on ABC (2.2 million viewers). Alabama beat Georgia 41-24.

The most-watched regular season game in 2020 was the Week 10 showdown between the Tigers and Irish. For NBC, it was one of only two of its regular-season offerings to draw four million plus viewers, the other being a Sept. 12 (Week 2) matchup between Duke and then (10) Notre Dame (also the Irish’s season opener) that attracted 4.23 million. Though, as detailed above, (8) Florida and (5) Georgia clashed earlier that same day (pulling in 6.34 million viewers), the only other notable action in primetime was Stanford at (12) Oregon on ABC (1.66 million). Notre Dame beat Clemson 47-40 in double overtime.