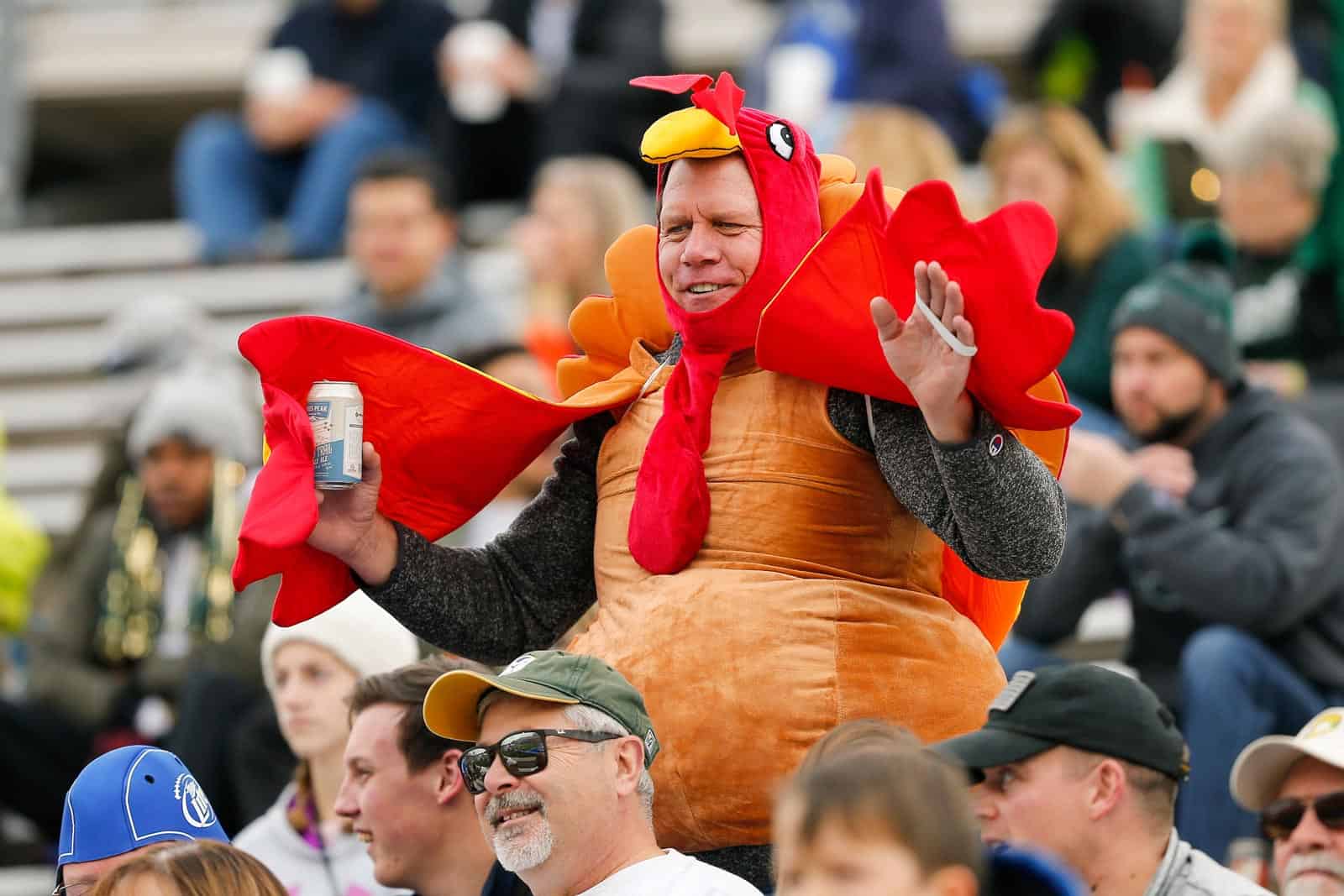 The Thanksgiving Football Schedule for the 2021 season is set! The schedule includes all FBS and FCS college football games plus NFL and CFL contests this holiday weekend.

The football schedule this week kicks off on Tuesday, Nov. 23 with two games in the Mid-American Conference (MAC). Buffalo travels to take on Ball State while Northern Illinois hosts Western Michigan, both at 7:00pm ET.

Thanksgiving Day kicks off at 12:30pm ET with a Thanksgiving Classic game in the NFL, which features the Chicago Bears traveling to take on the Detroit Lions at Ford Field in Detroit, Mich.

An FCS matchup between Tuskegee and Alabama State is scheduled for 3:00pm ET, and that is followed by San Jose State hosting Fresno State at 3:30pm ET.

Two more Thanksgiving Classic games follow with an SEC football game sandwiched in between. First, it’s the Dallas Cowboys hosting the Las Vegas Raiders at 4:30pm ET. Next is the Egg Bowl featuring Ole Miss at Mississippi State at 7:30pm ET, and then the New Orleans Saints play host to the Buffalo Bills at 8:20pm ET.

Football on Black Friday begins at Noon ET with four matchups. Seven additional games are scheduled for Black Friday, culminating with Washington State at Washington in the Apple Cup at 8:00pm ET.

Thanksgiving week is also Rivalry Week in college football. Some of the matchups include Alabama at Auburn, Clemson at South Carolina, Georgia at Georgia Tech, Oregon State at Oregon, Oklahoma at Oklahoma State, and Cal at UCLA.

Note: FBS rankings are based on the College Football Playoff Rankings from Nov. 16. Rankings will be updated following tonight’s release.

Wishing everyone a Happy Thanksgiving this year.

Excited for The Game, the WI/MN battle for the Axe, and the BYU/USC matchup.

No more important games on ABC, please. Here in the Sacramento area we have not had ABC on DISH for 2+ months, with no end to the standoff in sight. Alternative news sites abound, but for live sporting events there is no alternative (other than rigging your TV for over-the-air reception via antenna). I hope the NCAA and advertisers are paying attention, and will punish ABC in the future.

I agree with your sentiment. But as a short term solution couldn’t you just get an over the air antenna for the channel, as you mentioned? Usually <10 USD.