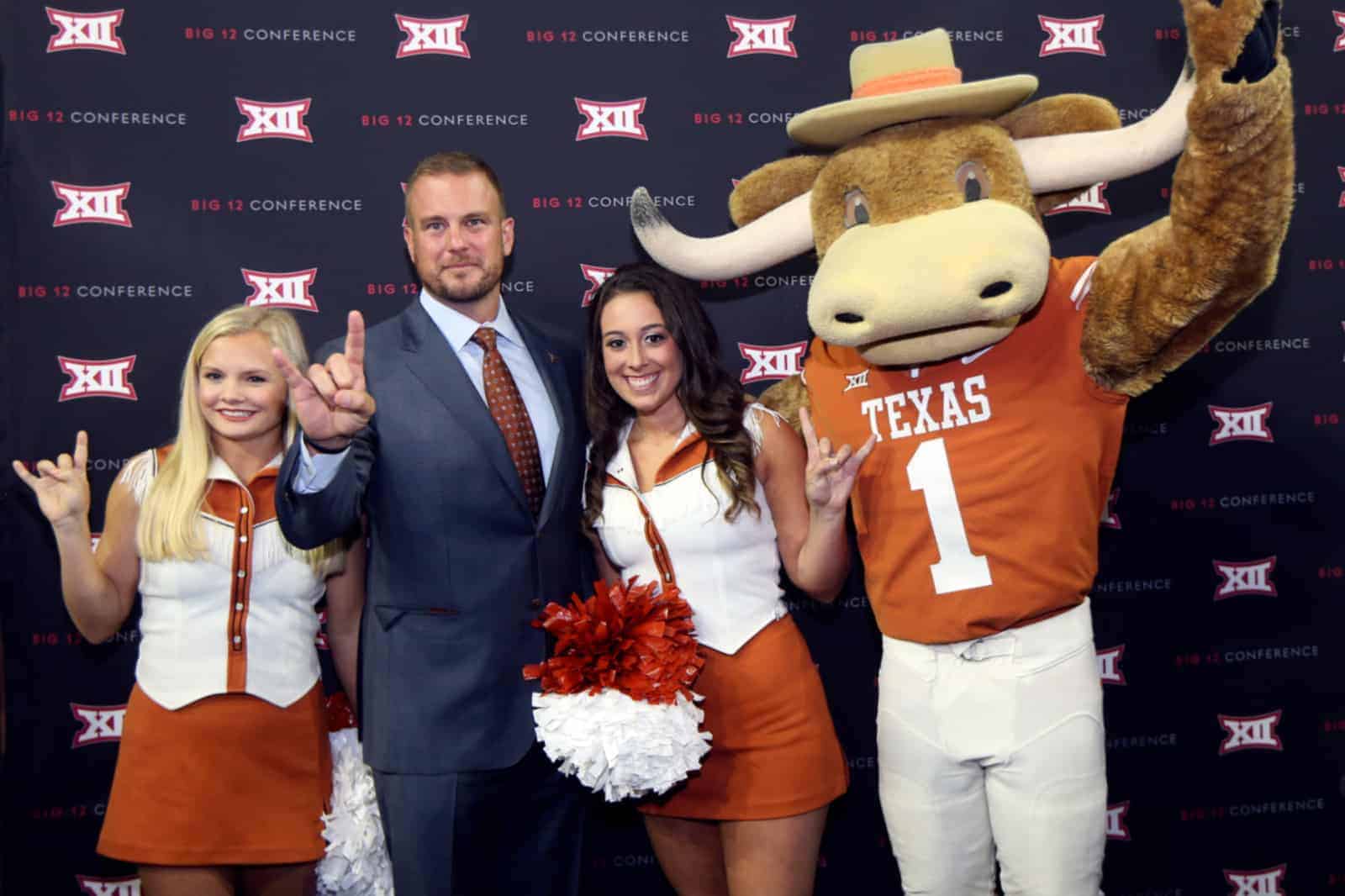 Vandalism of a school mascot. Dueling fight song references to each other. The Lone Star Showdown.

The Texas-Texas A&M rivalry that has lain dormant for six seasons now sees regular resurrection attempts, even including the introduction of legislation to mandate its being played. Texas athletic director Chris Del Conte stoked the fire a bit more at the Big 12 spring meetings earlier this year.

“At some point and time we will pick up our rivalry,” said Del Conte. “It’s important to our state and important to our fan base. I’m assuming when it’s appropriate and ready, we’ll play. It’s an opportunity for us to do that. We’d like to do that, it’s just matching up schedules.”

A&M’s athletic director Scott Woodward also expressed interest — though, maybe not to the same level as his counterpart.

“Chris and I go way back and we know each other and we’ve had conversations about it,” Woodward told the Dallas Morning News in May. “But this thing is all about timing. And frankly my focus is on winning the SEC West and the SEC championship. So I have to focus more east in my geography […] And I’ve got more concerns about competing against LSU and Auburn and Alabama and Ole Miss and Mississippi State and Arkansas. And while the rivalry is great and it’s important, there has to be some timing and scheduling issues that have to be met.

Both sides’ non-league slates are loaded with marquee opponents for the next few years — Texas and Alabama recently scheduled a home-and-home for 2022-23, while A&M has home-and-aways with Miami (FL) and Notre Dame, just to highlight a few — but this seems to be the made-for-television event that most fans and television networks crave.

Fast-forward to Tom Herman’s appearance this week at Big 12 Media Day in Frisco, where he was, predictably, asked again about the possibility of the two facing off on the gridiron.

“To me, there’s a very logical one an hour-and-a-half east of us,” said Herman in an interview with SiriusXM’s ESPNU Radio, in which he stated his desire to play a Power 5 school outside of Big 12 play each season.

Herman also expressed interest in having the Aggies come back to Austin as a regular part of the rivalry.

“The University of Texas does not play a rival at home, ever,” Herman added during the radio interview. “Our only now-true historic rival is Oklahoma. We play them in Dallas at the State Fair.”

If the two teams do renew pleasantries, one thing can be guaranteed:  the game will not take its normal place on Thanksgiving evening. TCU and Texas Tech now regularly occupy that slot on Texas’ schedule, on a rotational basis. The four most recent contests between the two took place on the holiday evening, but any future games would more likely be destined for an early-season showcase.

The Longhorns have won 76 of the teams’ 118 meetings, though the clubs have split the six most recent outings.

A correction: Texas regularly plays a rotation of TCU or Texas Tech on Thanksgiving weekend, not just TCU.

Right you are. I’ve updated the copy.

A&M needs to get the A&M/Arkansas game OUT of Jerry’s world. And have that series played on campus in College Station and Fayetteville. Maybe just maybe…. then UT/A&M can be played at AT&T stadium in Arlington.

I wonder if it does “continue to gain steam.” Both sides are talking about renewing the rivalry, but both sides have talked a big game since A&M switched conferences. A&M even refused to play Texas in a low-level bowl game a few years ago. I have some doubts that the rivalry will be renewed anytime soon. It would be great to see as a neutral, but both these programs are so stubborn that I’m not sure either will admit they were better off playing each other

I don’t think Texas cares about playing TCU or Texas Tech on Thanksgiving weekend. They are playing at Kansas the Friday after Thanksgiving this year, so they can’t care very much.

The reality is that, going off this year’s Big 12 schedule, it would be easy for Texas to play A&M and Kansas to play Missouri on rivalry week, then UT and KU could just play early in the season. Adding both of those non-conference games on Thanksgiving weekend would also keep the SEC schedule balanced that week as well.

Getting the Arkansas-A&M game out of Jerryworld would help facilitate a Texas-A&M game. As it stands, A&M can’t play UT on a home-and-home basis and keep playing seven home games until 2028 without cancelling on a Power 5 opponent.

There’s no reason for UT-A&M to be neutral. If they play, it will be on campus.

Second, Jones’ ties to Arkansas is what will keep A&M and Arkansas in Dallas. So, you can forget him giving that up.

Texas was the one that gave up the rivalry, just like Kansas refused to play Missouri. It’s lame, but they were the ones that got mad when they left for the SEC.

Great, but it’s not that easy. Does LSU return to playing Arkansas that weekend? Who do Kansas St. And Texas Tech/TCU play then?

Two extreme ego driven AD’s allowed the game to fall into the bin of oblivion. Their arrogance will take time to overcome.

Kansas St and Texas Tech/TCU aren’t playing each other on Thanksgiving weekend this year.

While the SEC does determine which bowl game teams go to, the schools certainly have input into that decision. It’s well-known that A&M pushed the SEC to not put them in the Texas Bowl against UT. Other than the extreme anti-Texas crowd (both schools have their extremes), the Aggies I talk to acknowledge that A&M pushed the SEC to avoid the match-up because it was A&M’s view that they had the upper hand at that point and there was only downside to playing UT in a bowl game, which was frankly a reasonable view for them to take at that time.

With respect to the keeping the A&M-Arkansas game in Arlington, Jones’ ties to Arkansas definitely impact the desire of UA in keeping the game there. That said, A&M could simply say no, and then it would default to home-and-home like any other conference game. Arkansas can’t force A&M to keep the game there and I think there’s a good chance that A&M won’t agree to extend the current contract when it expires. It made a lot more sense for A&M when the game was a non-conference game.

The Texas Bowl wanted the Texas-Arkansas matchup that year mainly because it was the 45th anniversary of the Game of the Century. We’re not far off from the 50th.

Wait… so am I reading that correct that on Thanksgiving the Texas Longhorns always gets to play at home? They make the opposition always travel to them? That seems a little unfair to the other teams.

It’s well known? This is the first I’ve heard of it and I consider myself to be pretty plugged in with A&M sports. At the end of the day, there is a lot of bad blood between these two schools. Lots of [email protected]!holes on both sides. I think the smoke needs to clear for a bit longer before this game can be played again. A&M certainly has a significant coaching advantage over Texas for the forseeable future. If I were Texas, I would probably not be pushing this to happen.

The Aggies you talk to?

So, people who have opinions?

Look, the SEC determines who goes to which bowl. Does the school have influence, perhaps, and if A&M or Texas balked at giving up a huge payday to play in some “low-level” bowl game, I don’t exactly blame them.

Why would A&M “simply say no” to Jerry Jones? That’s asinine.

Full Disclosure I am not a fan of either program, but being a fan of Big 8/12 football for 60 years I do have an appreciation for fans desire to see a long time rivalry rekindled.

So with that in mind let me point out the fallacy of believing that both programs do not have the (current) ability to rekindle this rivalry on an annual basis. They don’t need to acknowledge each other, hell they don’t even have to schedule each other. All they have to do is win their respective Conference Championships. The playoff committee will guarantee they meet in the first round of the playoff, because those crooked bastards won’t want to allow the possibility of an all Texas National Championship game.

Please schedule this game, and I prefer it late in the season like South Carolina Clemson or Florida v Florida ST.

I’m against reviving our rivalry with tu. We need to let that dead horse die.

Within the SWC, it made sense. Now our conference is multi-state. We should embrace that. We are lucky to be in the SEC and we should contribute to making that conference stronger, not weaken it. IMHO, LSU makes for an even better rival. They’ve got stronger fans than tu. And they represent an entire state. tu, despite its name, really only represents Austin.

In fact, let’s talk about some serious heresy. I’d like to change the fight song to “Good-bye to Louisiana State University” and “yellow and white” or “purple and white”. (We could alternate lyrics per game.) And it would be “Saw varsity’s claws off”.

And LSU is a tough opponent. Rarely do they have a losing record. We could count on a game with them often being critical to go to the SEC Championship game or a better bowl game. tu can’t compete with that.

Alabama has Auburn, Ole Miss has Miss St.; to have a rivalry outside the SEC weakens the conference. Also, nearby New Orleans has a lot more to offer every other year than Austin, which you can go to any time of the year.

It was good while it lasted, but it’s time to move on. The SWC and Big 12 were part of A&M’s childhood. It’s now time to move on to adulthood with the SEC.