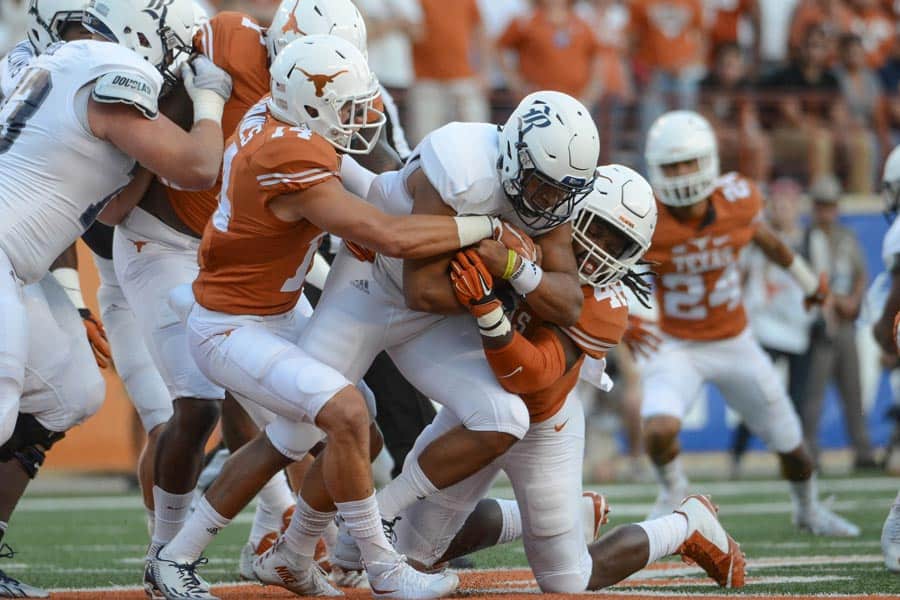 The Texas Longhorns and the Rice Owls have scheduled a three-game football series for 2019, 2021, and 2023, FBSchedules.com has learned.

In the first game of the series, Texas and Rice will square off at NRG Stadium in Houston on Sept. 14, 2019. The Owls will be the home team and will receive a $1 million guarantee, according to a copy of the contract obtained from The University of Texas at Austin via an open records request.

In a separate contract, Texas and Rice have scheduled two additional football games which will both be played at Darrell K Royal – Texas Memorial Stadium in Austin. Texas will host Rice on Sept. 18, 2021 and will pay the Owls a $1 million guarantee. Two seasons later on Sept. 2, 2023, the Owls return to Austin for a $1.5 million guarantee.

Rice was previously scheduled to face Texas A&M at NRG Stadium in 2019 to conclude a two-game contract that began in 2014 in College Station. The Owls also list three other non-conference opponents for 2019 (Wake Forest, Baylor, and Army), so it’s likely that the Texas A&M contest has been postponed to another season or canceled altogether.

In addition, Rice was scheduled to host Baylor on Sept. 14, 2019, which is the same date as the newly scheduled game against Texas at NRG Stadium. That means the Baylor game is on the move also, but probably just changing dates that season.

Both Texas and Rice have officially announced the three-game football series.

Regarding the previously scheduled Rice-Texas A&M game in 2019, Rice stated in their release that A&M “…requested to release the slot on its schedule due to a scheduling conflict.”

Since Rice has the ability to use the Hawaii exemption in 2018, could the TAMU possibly moved up to then?

So, Texas says they won’t play A&M because they are in-state and the Longhorns have nothing to gain by playing another in-state game…

Then they go out and schedule Rice.

Texas just doesn’t want to schedule games against teams in-state that they will probably lose to. Teams outside the SEC are just plain scared of competition.

Teams outside the SEC are just plain scared of competition.

Take it easy on the sarcasm, people may think this was a serious comment.

In the next six years, Texas is playing Notre Dame, home-and-home with LSU, USC and Maryland, and at Cal and Arkansas. Texas doesn’t play FCS schools. Saying they are “just plain scared of competition” can’t be a serious comment.

With regard to that one specific school, the reality is that neither Texas nor A&M have any interest in playing each other right now. The future scheduling patterns of both schools make that obvious.

Yeah sounds like ur still asleep. keep on dreaming maybe when u wake up stumblin won’t be around… Sorry try playing the Woffords and the rajin cajuns perhaps that will enable u to chant easy street….no pun intended

Obviously, if you are going to say Texas won’t schedule A&M because they are in the same state but then throw out that argument so you can play Rice, well… They are scared to play A&M. A loss by Texas to A&M has far more repercussions for Texas than a loss to Notre Dame or USC. Far more. So, why take the chance, right? I mean, Texas should beat Rice every day of the year, but A&M, probably not.

But I don’t blame them for being scared of A&M. The way they’ve been playing, Texas may not even be in the top five in the state lately.

Texas isn’t playing A&M because they don’t want to play A&M, which is the same reason A&M isn’t calling up Texas to schedule a game either. Neither administration wants to play the other right now.

In fact, A&M is the one who got their conference office to avoid a bowl game against Texas in 2014 and against Texas Tech in 2015.

If they’re reasonably good enough at the same time, A&M and UT could end up second in their conferences and meet in the Sugar Bowl, and if third, the Cotton Bowl. Problem with that is… Texas has to stop stinking. Good luck with that!

Because A&M is on the rise…

Auburn and Texas needs to play. It could be the “Battle of who can lose the most assistant coaches in an off season Classic’ Long name but fun….