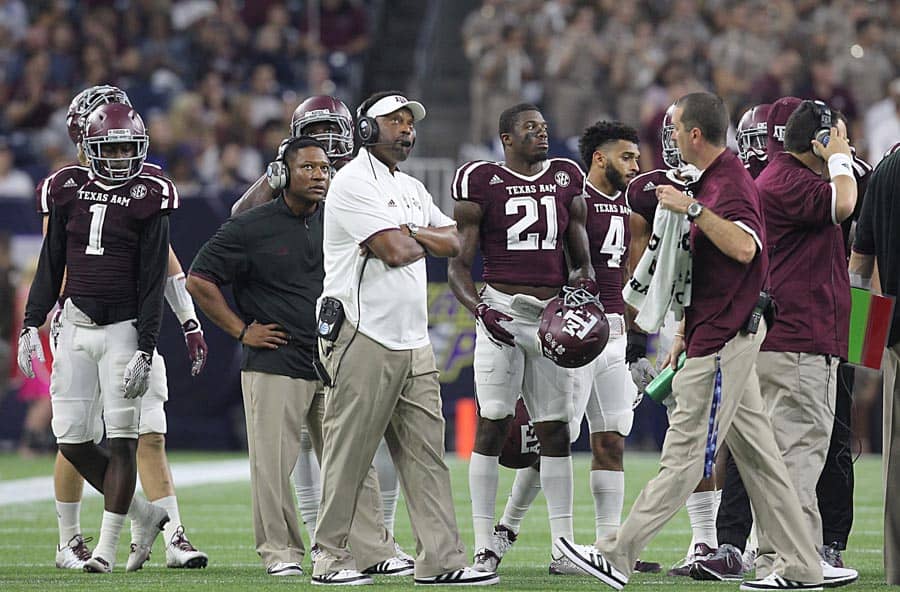 The Texas A&M Aggies have added games against ULM, Prairie View A&M, and Nicholls State to their future football schedules, FBSchedules.com has learned.

Texas A&M will host the ULM Warhawks at Kyle Field in College Station on Nov. 17, 2018. The Aggies will pay the Warhawks a $1.4 million guarantee for the game, according to a copy of the contract obtained from TAMU by FBSchedules.com.

ULM is a member of the Sun Belt Conference. Late last month, it was also learned that Texas A&M will host North Texas in 2017. The Aggies will pay the Mean Green $1.25 million for that contest.

Texas A&M has also tentatively completed their non-conference schedules in 2016 and 2017 with the addition of two FCS teams. The Aggies will host the Prairie View A&M Panthers on Sept. 10, 2016 and the Nicholls State Colonels on Sept. 9, 2017.

Prairie View A&M will receive a $450,000 guarantee for visiting Kyle Field, while Nicholls State will get $550,000, according to contracts for both games.

Texas A&M is scheduled to open the 2016 season at home against UCLA on Sept. 3. In addition to PVAMU, Texas A&M is set to host New Mexico State on Oct. 29 and UTSA on Nov 12.

The Aggies open the 2017 season with a trip to the Rose Bowl to face UCLA, the final game of a home-and-home series. Texas A&M opens their home slate with Nicholls State on Sept. 9, followed by UL Lafayette on Sept 16 and New Mexico on Nov. 11.

The addition of ULM gives Texas A&M two non-conference games in 2018. The Aggies are also scheduled to kick off a home-and-home series against Clemson that season in College Station on Sept. 8.

Thanks for scheduling ULM. That will be at least one season Auburn does not play them. I hate seeing them on the Tigers schedule year after year

No SEC School should be playing FCS schools. Its slap in the face to all college football fans and stealing from the paying customers. Its the equivalent of NFL team scheduling a preseason game during the regular season.

agree but since they already 9 Power 5 opponents it will have to happen from time to time. I would rather see the Aggies play PararieView and Auburn play Alabama State since they are in state schools

The PVAMU game is not only a good payday, but it will be great exposure for our Program.

fflnick — completely disagree. The SEC is a tough slate as it is. The physical toll that the teams take during conference place commands that they have at least one or two patsies. They earn it.

Jay- Its an insult to all objective college football fans who pay for tickets. Times are a changing. Rewards for schedule manipulation are falling to the wayside. Its about quality wins and terrible losses. The only benefit for teams to play FCS schools is bowl qualification. If team loses to FCS, its crushing. If OKL and/or TEN play well both will benefit greatly by this weekends game. MICH ST, ORE same thing. Teams in other conferences are willing to play quality schools. Any perceived conference advantage is nullified when others are beefing up their schedule. Playoff is breath of fresh air where opinions are marginalized in propping up fake championship contenders. You got to earn it on the field now.