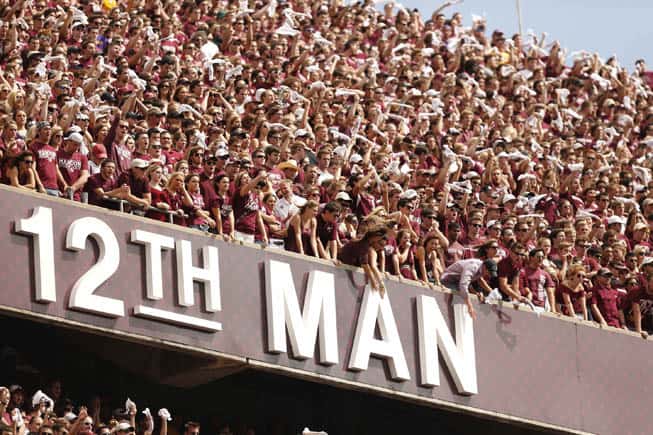 The Texas A&M Aggies have added the ULM Warhawks to their 2014 football schedule. We have also learned that a contract for TAMU’s series with USC in 2015-16 was never finalized.

A copy of the Texas A&M-ULM game contract was provided to us by a user and then verified with athletic officials at the University of Louisiana at Monroe.

Texas A&M will host ULM at Kyle Field in College Station on Nov. 15, 2014. The Aggies will pay the Warhawks a $1.1 million guarantee for the game.

Texas A&M now has three non-conference games scheduled in 2014, but their strength of schedule make take a hit in the inaugural season with the College Football Playoff.

The Aggies are currently set to open the 2014 season at home vs. the Lamar Cardinals of the FCS. Lamar finished the 2012 season 4-8 and was ranked 208th in the Sagarin Ratings.

ULM also has three non-conference games set for 2014, and all are against teams of current BCS conferences. The Warhawks open the season at home vs. Wake Forest on Aug. 30 and then travel to Baton Rouge to play LSU on Sept. 6.

Back in 2009, then Texas A&M Director of Athletics Bill Byrne announced that the Aggies were “finalizing a series with USC for the 2015 and 2016 seasons.” To date, a contract has not been completed for that series.

A spokesman for the USC athletic department told us last night that “there were very preliminary discussions between the schools, but nothing ever came of it.” Officials at Texas A&M have not yet returned a request for comment.

The same 2009 release also stated that Texas A&M would travel to Oregon in 2018 and host the Ducks in 2019. An Oregon official confirmed there is a signed contract and that the games are currently scheduled for Sept. 15, 2018 in Eugene and Sept. 14, 2019 in College Station.

We were also provided contracts that revealed the dates for two previously announced Texas A&M games. The Aggies will host Louisiana Tech on Sept. 10, 2016 and New Mexico on Nov. 11, 2017. Tech will receive $200,000 for their contest, while New Mexico will get a cool $1 million.

Nice crappy non league schedules Aggies! You will never appear in a national championship game! Are the Little Sisters of the Poor unavailable?

Did you think that A&M would be competing for a national title anytime soon? A&M is listed as the AP national Champion of 1939. They are now members of the conference of football champions where Alabama Florida and LSU have won multiple NC’s in the last 10 years. Auburn won it in 2010 Tennessee a little further back in 1998 and Georgia clear back in 1980.

Since 1992 the era that has brought us the Bowl Coalition Bowl Alliance and BCS 12 schools have won or shared a NC. That is only about 5% of FBS programs. So A&M should be concerned with winning their division first. Their non conference shed does not matter if they win the SEC they will be in the playoffs.

ULM is a nearby school and draws students from the same pool of students (and athletes) in East Texas. It’s not just about strength of schedule, but also cultivating competition in the region.

A&M has never had the extra-regional emphasis that UT or some of the “brand name” schools have had over the years. Students tend to be from rural areas with more emphasis on the hard sciences. I like the choice of ULM.

ULM was a bowl team last year and is a small school on the rise. Not as bad of an opponent as some are making out.

A&M is a “brand name” school. Have you been in a coma? The past is the past. The present and future is bright for the Ags as the exclusive representative of the SEC for the state of Texas. They just got through destroying OU,the Big XII Co-Champion in the Cotton Bowl. Teams from other Former BCS conferences aren’t exactly in a hurry to get beatdown by the new powerhouse that is Texas A&M football.

ULM plays several SEC schools… They are contenders!! It has not hurt their strength of schedule!

So LA Tech only gets 200K while New Mexico will cash in a million bucks? LA Tech needs to get some better negotiators

We played at LA Tech last year in Shreveport. We aren’t playing at UNM

@ Stellcat @ Jack – gotta agree with stellcat on that one – ULM is getting $1.1 m for coming to A&M – if La Tech is only getting $200 k to come over, i’d definitely say La Techs team fell down on that negotiation – those two are rivals in NE Louisiana, that isnt gonna sit well with the bulldogs

Louisiana Tech isn’t happy about anything good that happens for ULM, like the Independence Bowl Bid LTU turned down because they didn’t want to play a “weak” 8-4 ULM team. I say that is selfish and unclassy.

The SEC and Texas A and M are running away from USC. Tried to run away from Oregon, but the Ducks held them to their SIGNED contract.