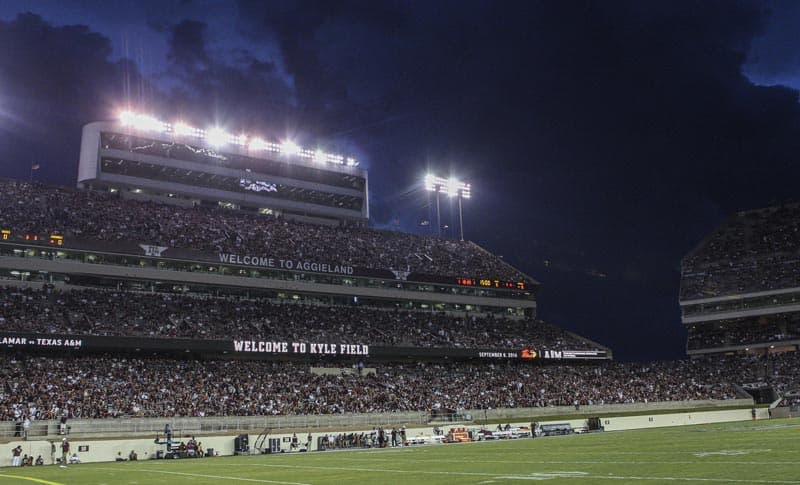 The Texas A&M Aggies and the Notre Dame Fighting Irish have scheduled a home-and-home football series for 2024 and 2025, both schools announced today.

In the first game of the series, Texas A&M will host Notre Dame at Kyle Field in College Station on August 31, 2024. The Aggies will then travel to face the Irish at Notre Dame Stadium in South Bend on September 27, 2025.

“These two contests between Notre Dame and Texas A&M figure to be excellent intersectional attractions,” says Notre Dame vice president and athletics director Jack Swarbrick. “We had set a goal of adding representation from the Southeastern Conference to our future schedules, and we’ve accomplished that with the addition of this series, as well as the one with Georgia.”

The 2024 game will be the first regular-season meeting between the two schools since a 2001 contest in College Station. Texas A&M and Notre Dame have squared off five times in bowl games and the Irish hold a 3-2 advantage in the series.

“When you think of tradition-rich football programs, Texas A&M and Notre Dame are at the top of the list,” Texas A&M Director of Athletics Eric Hyman said. “We are delighted to have them back on the schedule again for the first time since 2001.”

Notre Dame will fulfill Texas A&M’s “strength of schedule” mandate for 2024 and 2025. The SEC’s mandate, which goes into effect in 2016, stipulates that each conference member must play at least one power five non-conference opponent, or Notre Dame, each season.

Notre Dame will continue USC forever. they have played every year since the 1920’s. ND wants to go to California annually for recruiting, they do that via alternating USC and Stanford away and home years. That’s why ND added Stanford about 20 years back so Cali is yearly instead of every other. ND also views Stanford as another school with high academic standards for the general student body and players. Stanford has become better in the field than ND may have expected as until the last 10 years Stanford was a lower end team of the P12 most years and now they are ranked most of the last 10 years.

Notre Dame wants to play them annually but there are no known contracts past the reported dates.

I just reported the 2019-20 cancellation of the Texas-ND games:

The Irish play Stanford annually? Through 2019 that is.

ND will more than likely renew Stanford, actually I would be shocked if they didn’t. They have played every year since the late 80’s when ND decided for recruiting they wanted to get to California every year. ND has played USC every year since 1920’s. Stanford and USC are part of a strategic recruiting and also are top academic universities. The only other choices for ND to get to cali yearly is if they start playing UCLA or CAL, which are also top universities that they wouldn’t mind be associated with in annual series. I however think they will stick with Stanford as if you follow recruiting ND and Stanford recruit the same players more than ND does with UCLA or CAL

Notre Dame has said they want to continue playing USC and Stanford annually, but there are no known contracts past the reported dates.

A&M Series is all about recruiting. ND has played several neutral site games over the last 5 years to recruit the state of TX. They have a series with Texas and now a series with A&M. Would not be surprised if they add a series with TCU and also add some neutral site games in Tx. ND wants to get to California, TX, and Florida for recruiting as they produce the most 5 star recruits. The ACC deal gets them to Fl via Miami and FSU, Cali yearly via Stanford and USC series.

Has there been any sort of official announcement regarding the cancellation of the second home/home between Texas and Notre Dame? I know you guys still had that series up through… what? … a few days ago? I understand that Notre Dame announced that they were interested in rescheduling the series once they added their home/home with Georgia (which seemed like a fairly careless move on Notre Dame’s part considering that their AD is the same guy who set the initial series when he set it, and clearly was aware of it… but used an excuse that he wanted games in Georgia and SEC country, which… I mean, I know Georgia Tech isn’t an SEC team, but won’t they be playing series with them thanks to their deal with the ACC?). And I know that Notre Dame HAS to maintain a certain number of home/neutral/away games for their TV contract and that’s why the series “must” be moved (again, seems like a reason to have waited for another time to schedule Georgia…?). But I’m pretty sure there would have been SOME SEC team that could have arranged to play in years where they hadn’t already made a deal….?

Anyway, I especially wonder how that is all playing out considering that UT’s new AD was the guy who held Notre Dame to at least the Tempe half of a football series that Notre Dame was wanting to back out of when he was running things at ASU. Clearly Patterson being hired by UT could have played a role in the ND decision since Swarbrick was buddy buddy with DeLoss Dodds and seems to have had a bit of a prickly relationship with Patterson over the ASU series.

Still, I’ve yet to see any public resolution to this. The closest I’ve heard were the (later quashed) rumors that Texas rumored discussions with Florida might have been to replace the ND series. Are they really planning to reschedule it still? Are they canceling it altogether? Might Patterson try to enforce at least part of whatever deal was made he did with ASU? Or did the deal never make it to the point of signing on the dotted line?

Just curious. I know for a while there were rumors around Austin that Dodds was working to leverage his relationship with Swarbrick into replacing Stanford with Texas on ND’s schedule, essentially maintaining the tradition that Notre Dame would end the season somewhere warmer than South Bend, but having it alternate between Los Angeles and Austin… but we’ve heard far less about Notre Dame (and far more about the series that we have with USC and now Michigan) since Patterson stepped in.

ND’s AD in an interview said they want to try to move the 2019/2020 TX games back. 2021 for ND is still fairly open, besides USC assume Stanford and then they can throw in TX. Of course the ACC rotation isn’t known so they won’t want to play Tx is that’s an FSU rotation year.

ND and TAMU played a series during Bob Davies tenure. 2000 and 2001 to be exact, with both teams splitting the homes games.This is far from the first time these two schools have met in the regular season

Thanks, read the release wrong.