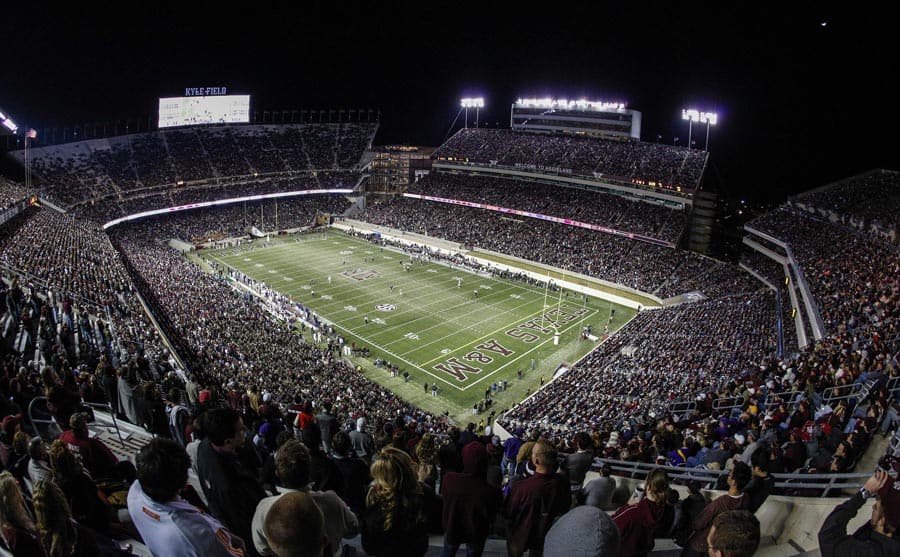 The Texas A&M Aggies have added the North Texas Mean Green to their 2020 football schedule, according to a copy of the game contract.

At the cost of $1.25 million, Texas A&M has added UNT to the 2020 football schedule. #12thMan http://t.co/4XoBqANepP @fbschedules @GBHunting

Texas A&M will host North Texas at Kyle Field in College Station on Sept. 12, 2020. North Texas, a member of Conference USA, will receive a $1.25 million guarantee for the game.

The Aggies and Mean Green have met a total of seven times on the gridiron, but not since a 28-9 Aggie win in 1998. Texas A&M has won all seven games in the series, including six in College Station and one in Irving.

Texas A&M now has two non-conference games scheduled for the 2020 season. The Aggies are also slated to host Colorado on Sept. 19, which is the first game of a home-and-home series that concludes in 2020.

For the first time in program history in 2015, the Texas A&M Aggies will not face a single opponent from within the State of Texas. The Aggies now have one slated for 2020 and also have opponents from the Lone Star State set in 2016 (vs. UTSA) and 2019 (at Rice).

North Texas now has three non-conference games scheduled in 2020. The Mean Green are also scheduled to host SMU on Sept. 5 and travel to Army on Oct. 10.

better than Lamar or Sam Houston

SHSU is a good squad

Phil B… TAM still has two games to schedule for 2020. One very likely a G5. And you can be assured the other will be a FCS program, likely from the Southland or SWAC. Can you say Incarnate Word or Houston Baptist?

Awaiting to hear which FCS programs the Aggies will add to their 2017 through 2019 schedules. I bet the Aggies don’t schedule “up” North Dakota St or a Montana school. SE Lousiana still needs a FBS opponent for 2016. The Aggies best schedule the Lions before one of the Florida schools does.

Just a heads up. Didn’t hear any announce on fbschedules that the Gamecocks have added West Carolina for 2016. But saw the announce North Carolina scheduled The Citadel for 2016. But that game has yet to be added to Tar Heel schedule by fbschedules.

WCU was mentioned in the article when SC also added UMass.