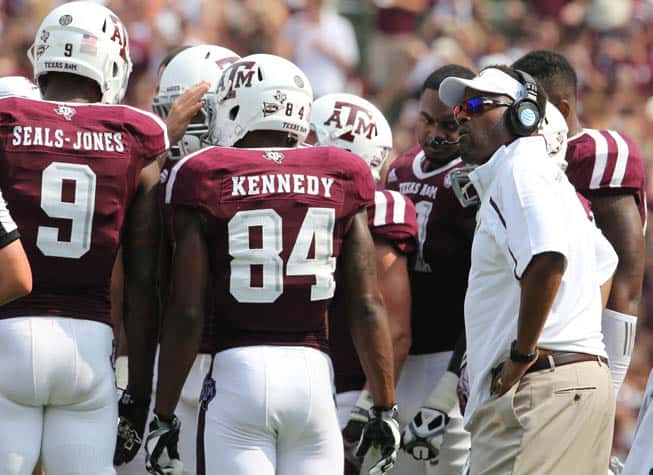 The Texas A&M Aggies have added Ball State and Western Carolina to their 2015 football schedule, FBSchedules.com has learned through documents obtained from the school.

Texas A&M will host the Ball State Cardinals at Kyle Field in College Station on Sept. 19, 2015. The Cardinals will receive a $1.2 million guarantee for their first ever match-up against the Aggies.

Ball State is a member of the Mid-American Conference (MAC) in the FBS. The Cardinals went 10-3 in 2013 and fell to Arkansas State 23-20 in the GoDaddy Bowl.

Texas A&M will also host Western Carolina on Nov. 14, 2015. The Catamounts, members of the Southern Conference in the FCS, have never faced the Aggies on the gridiron. They will receive a $620,000 guarantee for their appearance at Kyle Field.

The Aggies are set to open the 2015 season on Sept. 5 against the Arizona State Sun Devils in the AdvoCare Texas Kickoff. The game will be played at Reliant Stadium in Houston.

The additions of Ball State and Western Carolina give Texas A&M three non-conference games in 2015. They need one more game to complete their 2015 football schedule.

Last week, Texas A&M announced a home-and-home series against the UCLA Bruins. The Aggies will host the Bruins in 2016 and will travel to the Rose Bowl in 2017.

Texas A&M also has a home-and-home series on the books with the Oregon Ducks for 2018 in Eugene and 2019 in College Station.

A&M you are learning the way of the SEC well…:)

You don’t schedule some patsy like La Tech home and home, you get those to come to your place once, take a booty kicking and move on the your ultra tough SEC West schedule haha

at least you admit the SEC West is Ultra tough

UCLA plus an SEC West Schdule plus 3 SEC East games is not a schedule anyone not in the SEC would want to play. Getting two small schools is acceptable and I would place A&M’s schedule against anyone’s start to finish.

Ball State isn’t a “small school”. They play in the FBS.

Please….when comparing them to any school from the SEC, they are a “Small School” at a competition level.

$1.2 million guarantee? Central Michigan will do it for $1.1 million.

It makes absolutely no sense what so ever for any team to face a gauntlet each year just so the casual fan can have something to get excited about.

Western Carolina will give A&M all they can handle
and then some. Take a look at their games against USF
and Alabama. We have all 11 offensive starters
back and 9 defensive starters returning.
Don’t forget App. State beat Michigan.
Western 31 A&M 24