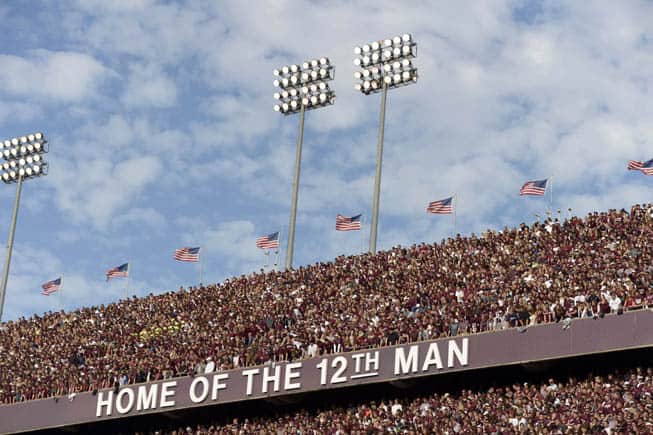 The Texas A&M Aggies have announced their 2014 football schedule, which begins with a trip to South Carolina on Thursday, Aug. 28.

It should be noted that Texas A&M’s official release states this is a “tentative” 2014 football schedule, so it’s possible that the Aggies are still looking to strengthen their non-conference slate.

The season-opener against the Gamecocks in Columbia will be televised by the brand new SEC Network, which was announced by the Southeastern Conference in August.

After South Carolina, Texas A&M opens their home slate at Kyle Field against Lamar on Sept. 6 and then Rice on Sept. 13. The Aggies then hit the road to face SMU on Sept. 20.

The following week, the Aggies face the Arkansas Razorbacks in the Southwest Classic at A&T Stadium in Arlington (Sept. 27).

Weren’t they suppose to play USC, oh wait, I forgot they punked out.

Not necessarily. TAMU’s former AD announced the games prematurely, and then the two never agreed on dates. There was never a signed contract.

Coach O at Ole Miss…..wwwwwwwwooooooooooowwwwwwww
Do you really want him?
I bet Ucla, Oregon Stanford, etc. hope so

Never agreed to dates cause A&M punked out. Who said anything about signing a contract?
You going to argue the fact that A&M backed out all good, but you know it is true because USC didn’t call it off once again A&M did. PUNKED OUT!!!!!!!!!!!!

Blame it on the SEC adding a 9th conference game. Bama had to drop Michigan State because of it. USC isn’t worth playing these days anyways. It’s not like the SEC has any reason to be scared of the PAC 12.

Not what USC wants. Couldnt handle A&M this year and probably won’t be able to handle them the next few years. Js.

Yeah right, what are you smoking. USC would spank A&M.

You’re a drug addict if you think USC could hang with A&M. USC’s offense is crap, and you saw what Arizona State did to the Trojans. It wouldn’t even be close. Mississippi State could take down USC this year.

hilarious that a USC fan is trying to throw smack

You must be another sec fan who thinks the sec should be a conference in the NFL.

here is some more smack for you that comes with facts. No sec team can compare to USC, not even Alabama.

Most NFL first round draft picks

Most NFL Hall of Famers

Most players drafted number one over all in NFL history

Name one sec school that can top that resume?

It’s cool how all of those accolades didn’t help USC beat Arizona State this year. I guess the Aggies made the better choice of team from the PAC 12.

Dude, if anyone is on drugs its you. USC lost to ASU because kiffin is an idiot. If they play that game again USC blows them out. ASU has beat USC 2 times in the last 14 years.
You seriously have no clue. USC has 50 scholarship players and kicking ass. Winning records under the most severe sanctions that were totally undeserved and still winning.
That is what USC is about.
2010 8-4, 2011 10-2 2012 7-6, 2013 so far 8-3.
Add that to USC’s resume. No school has done that. Alabama went 4-8 last time they were on sanctions.
As far as not worth playing USC. A&M would be so lucky for the honor. One of the five most historic programs in the history of college football.
USC is back on it’s way to the top and A&M to the bottom once manziel leaves.

A&M/SC on SEC Network and not ESPN? Apparently the bet is that Manziel, Clowney, and Evans will all be in the NFL (the first two a given), seriously reducing the game’s attractiveness.

Texas A&M wanted to back out of dates with Oregon, But Oregon AD said no way. Nice little (weak) non-conference Texas A&M has going for them in 2014. Time for the Aggies to get to work finishing up 2015 schedule. They are so far behind the curve. And when is the SEC going to a nine game schedule? 2017? That has not yet been announced. What is taking the SEC so long deciding? Ol Miss will need to cut one loose in 2017. Kudos to Tennessee for scheduling well, even when having some down years. But TA&M, Ol Miss, Miss St, Vandy, Arkansas, Missouri, Kentucky sure know how to assemble weak non-conference schedules. Oh yeah, the SEC is so great. Well one half is quite good, the other half is not. The SEC isot a well balanced conference. Until much more balance is achieved, and until the SEC goes to a 9-game conference schedule, the SEC cannot be referred to as great.

“SEC cannot be referred to as great.” Yet every year we clean up in bowl season–I suppose we schedule weak bowl opponents, too? Add that to 7 (SEVEN) consecutive N.C.’s and possible an eighth. Whatever your team/conference is, your jealousy is showing.

We were trying to increase our strength of schedule by eliminating patsies like USC. Get a decent coach and a few good recruiting classes, then call us.