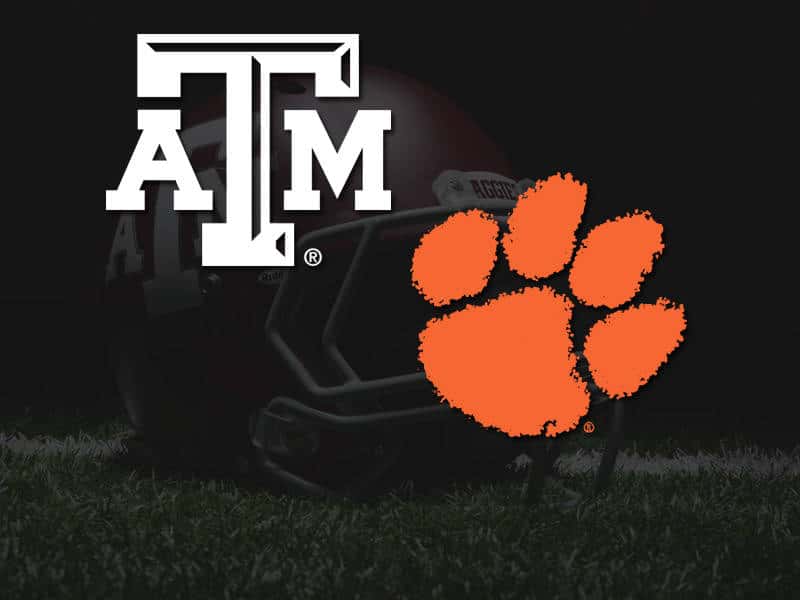 Just a few hours after extricating themselves from their home-and-home series with Oregon, Texas A&M has found a new dance partner for 2018 and 2019:  the Clemson Tigers.

Clemson Director of Athletics Dan Radakovich expressed his excitement in a release from the school earlier Thursday evening.  “We are looking forward to playing Texas A&M as the two schools share a rich military heritage, and of course, passionate fan bases,” said Radakovich.  “We know our fans make Clemson a great game day experience and the Aggie fans make Kyle field also one of the great venues in all of college football.”

Texas A&M Director of Athletics Eric Hyman was also happy with the arrangement.  “We are excited to play the Clemson Tigers, who have been on Texas A&M’s non-conference schedule previously,” said Hyman. “As a fellow land-grant institution, Clemson is very similar to Texas A&M with a great football tradition and passionate fans. This will be a great non-conference series for both schools.”

Hyman also addressed the earlier cancellation with Oregon in a release from the school.  “Our goal is to play seven home games at Kyle Field each season.  Playing at Oregon in 2018, combined with the Arkansas game in Arlington, would leave us with only six home games that season. In even numbered years such as 2018, we only have three SEC home dates as long as we continue to play Arkansas in Arlington.”

Clemson will travel to College Station on September 8, 2018.  The Aggies will return the trip to southwestern South Carolina on September 7, 2019.

All those people who made comments about soft scheduling look really dumb again.

Based on what the A&M AD said about playing seven games at home plus the neutral site game in Dallas (meaning no more than four true road games in any season), and looking at their future schedules, you can easily see what A&M’s non-conference is going to look like each season:

They won’t have any non-conference road games in even-numbered years.

It’s essentially the Florida scheduling model, except replace the Georgia game in Jacksonville with the Arkansas game in Dallas, and the annual Florida State home-and-home with another P5 opponent (UCLA, Clemson, Notre Dame).

It’s above the minimum they have to do to meet the SEC scheduling requirement, but only due to playing a better P5 opponent in that one game instead of a Kansas, Colorado, or Wake Forest. It’s clearly not what someone like Clemson does with their annual game vs. South Carolina and another tough non-conference games vs. a Georgia, Notre Dame, Auburn, or A&M.

and unfortunately they won’t leave the South again…

Are you kidding me. Clemson is a paper tiger, They choke in big games,

Have they lost some big games, too? Absolutely. Everyone remembers the OB against WVU and the Florida State game this year. Is it the least bit fair to say Clemson chokes in big games, implying ALL big games? Absolutely not. Everyone from Alabama to LSU to Auburn to Ohio State to Oregon to Florida State loses big games because only one team can win in a matchup of two good ones.

Plus, I think Clemson deserves some credit for their record in the past five or six years. They have a strong tradition, for sure, But their tradition isn’t at the level of Michigan, Penn State, Nebraska, Texas, Florida, or USC, yet Clemson is outperforming all of them so far this decade.

First, VTech is the #1 choke artist in CFB so claiming any Vtech game is silly, but does show how desperate you are to find a game to hype. Vtech is one of the most overrated programs in CFB who 90% of the time lose a big game.

I can go thru the other games and do the same thing, but you get the point.

Clemson is a paper tiger, there is a reason they

This looks like it is a good game for both Clemson and TAMU.

Typical SEC cowardice. Sorry, but the deck is stacked against the other P5 conferences. Hopefully the selection committee will take this into consideration.

Was way more impressed with the Oregon series. But I guess they can’t get enough of playing in South Carolina….?