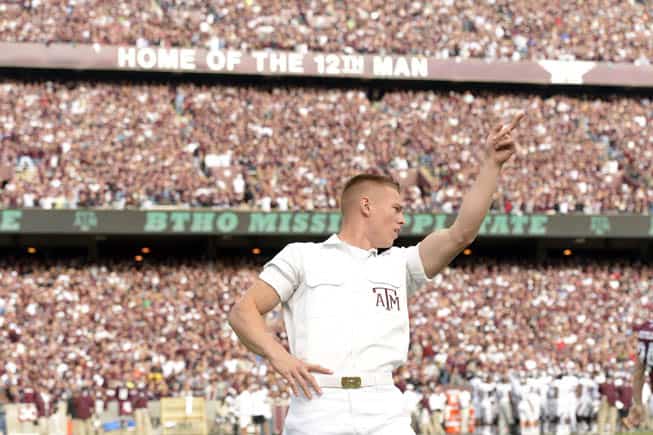 Texas A&M opens the 2015 season on Sept. 5 against the Arizona State Sun Devils in the AdvoCare Texas Kickoff at NRG Stadium in Houston.

The Aggies will then host their three remaining non-conference games at Kyle Field in College Station. Ball State visits on Sept. 12, followed by Nevada on Sept. 19 and Western Carolina on Nov. 14.

Originally contracted for Sept. 19, the Ball State game was moved up one week to Sept. 12 to accomodate the game vs. Nevada.

The Nevada game was recently added and was the final piece of the schedule for the Aggies. Nevada will reportedly receive $1.5 million for the game.

The SEC has not yet announced the 2015 football schedule, but the Aggies know who they will play and where. A&M will host South Carolina, Alabama, Auburn, and Mississippi State and will travel to LSU, Ole Miss, and Vanderbilt.

The Aggies will also be the visiting team for their neutral-site game against Arkansas at AT&T Stadium in Arlington.

Wow, A&M is scheduling like an SEC. Hope it counts against them in the SOS. They basically will have 8 home games.