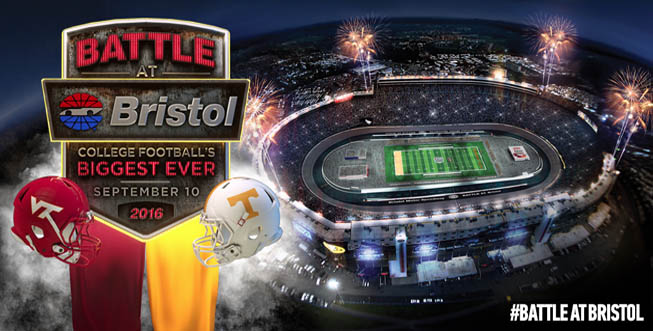 The Tennessee Volunteers and the Virginia Tech Hokies have officially announced that they will meet at Bristol Motor Speedway in 2016.

The game has officially been named the “Battle at Bristol” and it will take place on Sept. 10, 2016. Organizers are also calling the event “College Football’s Biggest Ever.”

This will be the first ever college football game and first football game at Bristol since an NFL preseason game between Philadelphia and Washington in 1961.

Bristol Motor Speedway is a NASCAR short track located in Bristol, Tennessee. It has a seating capacity of 160,000 and is the 4th largest sports venue in the United States.

An opening for the game in 2016 arose when Wisconsin postponed a home-and-home series with Virginia Tech that was planned for 2016 and 2017. The games were moved to 2019 and 2020 to allow Wisconsin to meet LSU at Lambeau Field to open the 2016 season.

Tennessee has also made changes to their future schedules to accommodate the Bristol game. A 2016-17 home-and-home series against the Nebraska Cornhuskers has been postponed to the 2026-27 seasons.

In 2016, Virginia Tech opens the season in Blacksburg vs. Liberty. After playing Tennessee, Tech hosts East Carolina on Sept. 17 and later travels to Notre Dame on Nov. 19.

Tennessee is currently slated to open the 2016 season at home vs. UConn. The Vols have two non-conference openings remaining unless the SEC moves to a nine-game conference schedule.

Who has been to Bristol? Are fans all but guaranteed horrible seats?

Seth, you are correct, I,ve been to the speedway many times. It will be very diffuclt to see the action from across the speedway from the stands. Another Bruton Smith gimick. At least the tickets aren’t so crazy. Need some good teams too

never been to Brisol, but have been to a ton of NASCAR races. Bristol is only a half-mile in length so visibility will be a non-issue. You will be able to see great from anywhere, but I would suggest you try and get tickets on either the front or back-straight for optium viewing pleasure. all the seats at Bristol are elevated about 10ft from the ground anyways because of the 36 degree banking of the turns.

gonna take a helluva lot of jumbotron-type technology to make the game viewable. questionable idea, but could be cool. Gimmicks!

WOW! WOW!! Could they play the SUPER BOWL THERE!! The weather could be CRISP or it could be FALL like!! LETS DO IT???

Did I miss when the mention of tickets would be on sale??