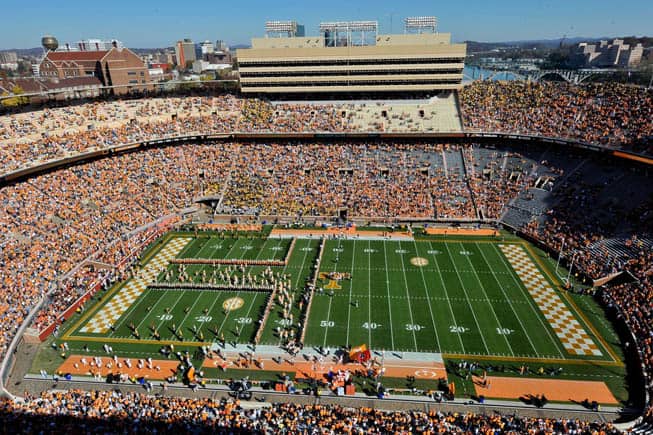 The Tennessee Volunteers will open the 2014 season against the Utah State Aggies, USU Vice President and Director of Athletics Scott Barnes announced Friday.

Tennessee and Utah State were previously scheduled to meet at Neyland Stadium in Knoxville on Nov. 8, 2014. The game was moved to Aug. 30, 2014 at Utah State’s request and will be the first ever meeting between the two schools.

“We are pleased with the opportunity to move the Tennessee game to the first week of the 2014 season,” said Barnes. “It simply works better in every aspect of our schedule. I appreciate working with Tennessee Athletic Director Dave Hart to get this done.”

Tennessee was previously scheduled to open the 2014 season at home vs. Chattanooga. Per The Chattanoogan, that contest has moved to Oct. 11, 2014.

The Volunteers, who are also slated to visit Oklahoma on Sept. 13, need one additional game to complete their 2014 non-conference football schedule.

Utah State, which begins competing in the Mountain West Conference this season, is scheduled to visit BYU on Oct. 3. The Aggies need two more non-leagues games to fill out their schedule.

Should be an easy away win for Utah State!

You people are goofy Tn is the greatest team in the country, Utah is just a run of the mill little want to be football team.

Tennessee will murder them, they are just a want to be big time football team and can’t compete with the big boys in the SEC

There must be a lot of sand to bury your head – UTAH STATE went home crying, Volun-tears!

Last U checked Tennessee couldnt compete with the SEC

What time will this game kickoff????