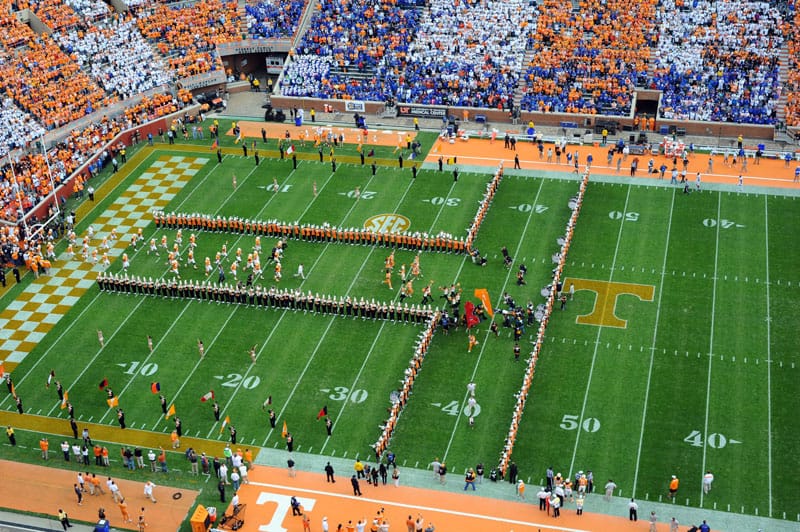 The Tennessee Volunteers have added the Charlotte 49ers to their 2018 football schedule, UT’s official website indicates.

Tennessee will host Charlotte at Neyland Stadium in Knoxville on a date to be announced. It will be the first meeting between the two schools.

The Charlotte 49ers started their football program in 2013. In both seasons as an FCS Independent, Charlotte has finished with a 5-6 record. The program is transitioning to the Football Bowl Subdivision (FBS) and officially joins Conference USA on July 1.

Tennessee now has two non-conference games scheduled for the 2018 season. The Volunteers open against the West Virginia Mountaineers, coincidentally, at Bank of America Stadium in Charlotte on Sept. 1.

Charlotte now has three games scheduled in 2018. The 49ers are also slated to host Appalachian State on Sept. 8 and travel to UMass on Sept. 22.

Tennessee opens against WVU in Charlotte though. Not a bad schedule yet depending on the other two teams they add.

Kevin, let’s be honest here. Tennessee, just like almost every other SEC team, will play 8 conference games, 1 Power 5 team (WVU), 2 lower tier Group of 5 teams, and an FCS team, unlike the Pac 12, Big 12, and soon the Big 10. Even half of the ACC plays ND including their 8 conference games. What a joke.

Overall, this type of schedule is similar to those of Baylor, Kansas, K-State (most years), Oklahoma State, Illinois, Indiana, and several others.

Does a team really want to be compared to Baylor, Kansas, Illinois and Indiana? There’s a reason why Baylor didn’t make it into the CFP.

I’m a lifelong Ohio State Buckeyes fan (first game attended was 1978 vs Baylor). Seems that every fan-base of Power 5 schools like to bash every other school in regards to their scheduling. It especially goes back & forth between The SEC & the other 4 conferences. The only thing that I disagree with schools doing is playing FCS opponents. Power 5 schools should not be scheduling FCS opponents, period.

Speaking for BiG teams, it is common to play 1 team from the Power 5 & then two others from the Group of 5. The BiG has gone to a 9 game conference schedule, as the Big 12 is doing (I’m not sure about other conferences). My feeling is that this is the way of the future for all of the Power 5 conferences.

I will not be one to indict Tennessee’s 2018 schedule when the schedule has not been entirely set. I will say this, many of these schedules are made years in advance. A few years ago Ohio State play Cal in a home & home series that was admonished as “soft” on Ohio State’s part. When those games were scheduled Cal was winning 8 – 10 games a year over a 3-4 year period & it looked like a good move. Ohio State has much of it’s non-conference schedule set through 2023 when they have Boston College, Texas & an unknown opponent. Who knows what type of teams BC & Texas will be by then – or what Ohio State will look like. Personally, I feel WVU is a very good schedule for Tennessee.

@Charles in Ohio: I bet you just looked up a random game. Jumping on the bandwagon now that the Buckeyes are champs.

On a more serious note, I completely agree. I think that the SEC should go to a 9-game conference schedule. I’m tired of Auburn consistently playing two crappy Sun Belt teams. One is enough. I’ve got not problems with FCS teams. They need the money and exposure

Congrats to the Buckeyes! As well, congrats to the Big Ten for having their Champion win the National Championship. With The Ohio State winning the National Championship I think this is a good time to point out it was the Buckeyes that won and not the Big Ten. As were the times Alabama won or Auburn did, it was those individual schools winning and not the SEC. I know many believe the SEC, and in particular the SEC West, is “so” strong, but my belief there are many within the SEC that are riding the coat tails of their Big Brothers. There is a lot of parity in College Football and truly just a few elite programs (sorry), and yet some schools wisely hide behind their Conference’s “power” teams and try to appear to be a “power”. I think the SEC schools and conference itself, do the best job of hiding their weaknesses.

The SEC NC Schedule again continues to be a joke in this coming 2015 and they continue to be allowed to be “rewarded” for their bad behavior. This may not be a scientific approach to measuring the 2015 NC schedules, but try to absorb this; When measuring all 64 of the “Power Five” Conference Schools for this coming 2015 season the SEC has nine (9) of the nineteen (19) weakest non-conference schedules. The measurement tool is simple; Award team – 3 points for each NC Power Five opponent scheduled, 2 points for each scheduled FBS opponent, 1 point for each away game (regardless of the opponents level), .5 (half) point for neutral site game of greater than 125 miles distance, 0 points for any FSC opponent and then divide that total by the total number of non conference games. A score less than 2.0 shows a real weakness in a non-conference schedule. Both Kentucky and Missouri scored the lowest with scores of only 1.25. Auburn, Ole’ Miss, Mississippi State and Texas A&M came in tied at tenth with scores of 1.75.

As for the results of the other four Power Five Conferences: ACC’s lowest was North Carolina in third position with a score of 1.63; The Big 12’s lowest were the four schools of Baylor, Kansas State, Oklahoma State and West Virginia coming in with scores of 1.67 that positioned them in a fourth place tie; The Pac 12 as well had their lowest scores being 1.67 with both Arizona and Washington tallying that total; and as for The Big Ten every school scored 2.00 or higher.

Only 19 schools scored less then the 2.0 Mendoza Line and again nine (9) of them were from the SEC. On the other end, fourteen (14) schools scored 2.5 or higher without a single SEC school being in that category. The two single highest scoring non-conference schedules were those of Stanford and Texas, both with 3.00 scores.

Look forward to comments and further questions. This scoring system measures the known facts. Whether a team is “ranked” higher or not is not used, this is just a simple fact base measurement

The problem with your rubric, is that it assumes all P5 schools are of equal weight. They are not. Seriously count playing Iowa State or Indiana the same as playing A&M or Ole Miss? Really? And what exactly is the science behind “125 miles distance”?
.
Furthermore, your denominator is the number of non-conference games??? Well, that automatically puts the B1G, SEC, and ACC behind the XII and PAC, since the first group are being divided by 4, and the second group by 3. (And note, the B1G hasn’t gone to 9 games yet… so you divided wrongly.) And exactly how are you counting Notre Dame when an ACC school plays them? It’s not a true full non-conference game per se now.

Ahh… looking through SEC 2015 schedules, now I see your bias. You chose “125 miles” because the distance from Auburn’s Jordan-Hare Stadium, to the Georgia Dome on the NW side of Downtown Atlanta, GA is right at 111 miles, thus allowing you to diminish Auburn’s playing of Louisville there this 0.5 neutral site pointage. Last I checked, it isn’t an Auburn home game…. it’s a road game, and driving into Atlanta from any direction isn’t so easy-peasy.

Hey David. Thanks for the notes. You’re correct, equal weight was given to playing any P5 school regardless of who they are, that’s not saying it’s correct, it’s just given credit for scheduling them.

Regarding the 125 mile distance. It was a distance selected before seeing any of the neutral game match-ups. The distance of 125+ was selected due to the fact it is basically a two+ hour bus drive to that location creating some distance. Even if you gave Auburn the .5 credit in 2015 their score still would only total 1.88. No bias to any school or conference was intended, the 125 miles was selected to reward a truer neutral site location.

In regards to your question to the denominator, No it is correct in how it is used. All schools having four NC games have the opportunity to score more total points, but then are divided by their total number of NC games. The denominator (divider) for the B1G for each school was used as four (4), so their numbers are correct. The B1G and SEC head-to-head is night and day, sorry, but the SEC has no where to hide with their lack of NC scheduling. [The total SEC points in 2015 is 101.5 and the B1G total points in 2015 is 127.5, or average team scores of 1.81 for the SEC and 2.28 for the B1G]

With Notre Dame, they were counted as a P5 school for those schools that played them, including the ACC schools [who scored 122.5 total points for a 2.19 average ACC team score] as these games are not counted towards their conference record. Notre Dame is the only independent team counted towards P5 credit. Note if you were to tally Notre Dames points they would have 38.5 points in 12 games giving them a score of 3.21 (outstanding).

I truly don’t have a bias towards the SEC or any conference, but I do have an opinion that the SEC is not scheduling equally with the other P5 schools and shouldn’t be rewarded for their bad behavior. I think it would be quite hard to argue a point that the SEC is scheduling a NC schedule that is comparable to the other P5 schools. By the way, the average teams score in the PAC12 is 2.15 and in the Big 12 it is 2.03.

Again, thanks for the thoughts.

Billy needs a job. Anyone hiring a dumbass who makes up his own rating system?

Thanks Cubfanone. You sound like a real intelligent individual. I hate to tell you what I do for a living as I have a strong suspension I’d embarrasses you with what you do. You do realize every rating system was started by someone, in other words their “own rating system”? Thanks again for your comment and Good Luck to your Cubs, I’m sure you’ll be looking again to next season before too long.

Billy, I like the system you have come up with. You make some great points. BCS came about the same way. Someone’s rating system. Wake up there Cubfanone!