Ten non-conference games to look forward to in 2018 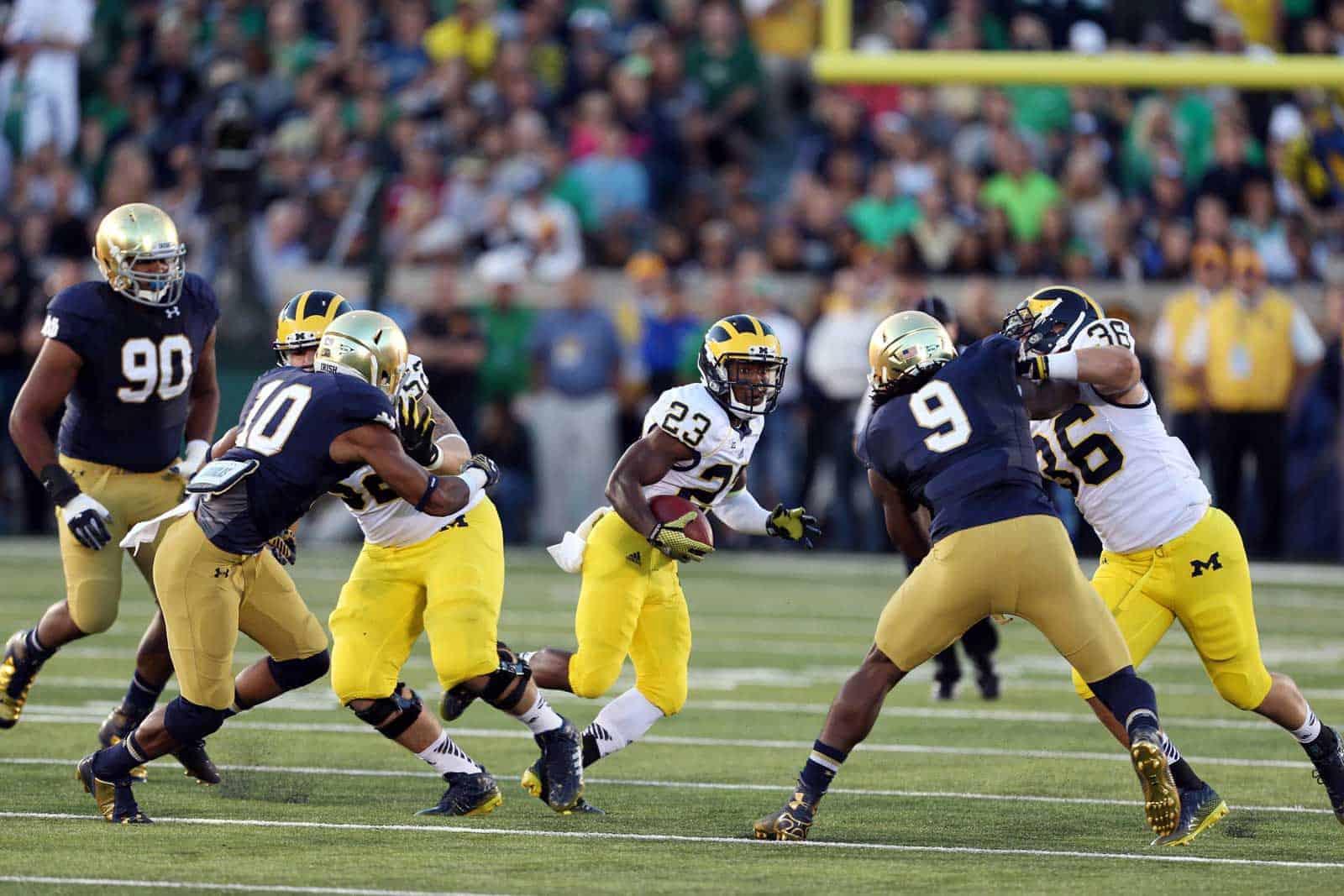 What do you say when it’s over?

Well, in college football, unless you’re from Alabama, you say, “there’s always next season.”

In the spirit of looking ahead, here are ten-conference games to get fired up about early and often. It’s enough to make everyone lick their chops, and that includes those fans still licking their wounds.

Ex-Alabama defensive coordinator Jeremy Pruitt’s first game as a college head coach comes against West Virginia, a team that finished 2017 ranked No. 20 in total offense. It’s a tall order for a Volunteer D that was No. 82 nationally in yards allowed per game, coughing up 600-plus to Georgia Tech, Alabama and Missouri.

It’s also Tennessee and West Virginia’s first-ever football meeting. The Volunteers are 9-8 vs. the current membership of the Big 12 while the Mountaineers are 25-25-2 vs. the SEC. The bulk of WVU’s action came against Kentucky (8-11-1) and South Carolina (7-4-1).

A heated in-state rivalry that cranked up in 2016 after a 15-year break, this early-season battle will go a long way in gauging if Penn State is a legitimate CFP contender. If you think an upset is too tall an order for Pitt, keep in mind that they’ve already played the role of giant killer twice in the Pat Narduzzi era – edging (3) Clemson 43-42 on the road in 2016 and taking down (2) Miami Fla. 24-14 at home last season.

The back end of a home-and-home that kicked off with the Trojans beating the Longhorns 27-24 in Los Angeles last year, this one will be an early litmus test for which of these two powerhouses is for real. Can USC improve on last season when it captured its first Pac-12 title in eight years and ascend to its first-ever CFP appearance? As for Texas, can it re-emerge as a national contender in the second-year of the Tom Herman era?

Oklahoma leads the all-time series 3-1. The Bruins’ only win came the last time the two met, a 2005 regular-season game in Pasadena.

The defending champions will come out swinging vs. the first Louisville team to play without quarterback Lamar Jackson since November of 2015. The Tide haven’t dropped a season opener since 2001, when they fell to (17) UCLA 20-17 at home, also Dennis Franchione’s first game at the helm.

This is Alabama and Louisville’s first meeting since the 1990-91 Fiesta Bowl, a game the Cardinals won 34-7. The Crimson Tide lead the all-time series 2-1, winning the only other two meetings, back-to-back games in Tuscaloosa in 1976-77.

The front end of a home-and-home, tune in to this one to see two old rivals go at it for the first time since 2014. Offering far more than simply a rendition of “reunited and it feels so good,” Michigan and Notre Dame should both be preseason contenders for the CFP bracket, so it could also be an early elimination game.

The Wolverines and Irish have met 41 times previously and played consecutively from 2002-14. Michigan leads 24-16-1, but the two have split the last four.

Another opening game of a home-and-home series, Clemson-Texas A&M has got tons of potential. Though the two schools haven’t met on the gridiron since 2005, Dabo Swinney and new Aggie head coach Jimbo Fisher have faced off each of the past eight seasons while Fisher was at Florida State. The two split the eight games, but Swinney has won three straight.

Texas A&M leads the all-time series 3-1. Clemson’s only win came in the most recent meeting, a 25-24 victory in College Station.

Another early test, tune in to see if Auburn can rebound vs. Washington after closing out 2017 with back-to-back losses to (7) Georgia (in the SEC title game) and (10) UCF (in the Peach Bowl), both at Mercedes-Benz Stadium. The Tigers haven’t lost three straight since 2012 when they dropped five consecutive games from Sept. 22 to Oct. 27.

This is the first-ever football meeting between the Huskies and Tigers. Washington is 3-10 all-time vs. the current membership of the SEC, while Auburn is 8-3 vs. the Pac-12.

If you’re wondering how Mark Richt (Miami) and Ed Orgeron (LSU) will fare in their third seasons as head coach, check out this blockbuster slated for the first Sunday of the 2018 season. Expectations are high at both schools and a win – or loss – in the opener could have a huge impact on momentum.

The Hurricanes and Tigers haven’t clashed since the 2005 Peach Bowl, a game LSU won 40-3. The Tigers also lead the all-time series 9-3. Miami hasn’t won since a trip to Baton Rouge in 1988, scoring an equally lopsided 44-3 victory.

Despite both enjoying long, successful careers, this is Gary Patterson and Urban Meyer’s first-ever meeting as head coaches. Patterson is 25-22 (53%) against ranked opponents vs. Meyer’s 39-15 (72%) career mark.

Alabama should drop their game with Mercer and pick up UCF!

Bama and SEC fans will tell you that Mercer is a quality team though….way better than UCF I’m sure! I can hear them chanting now, “SEC, SEC, SEC!” That way if any of the 14 teams win a natty they can all claim it.

yeh, it’d be the only quality game on ucf’s schedule

Even if Bama played UCF, it would not make this top ten list, please get over yourselves, Bama does play Louisville, that would be a quality win for sure.

All these other schools play home and home series, Alabama has to have the neutral site games. Why do they NEVER go up north or out west?

If you saw the pay checks Bama & other teams get for neutral site games, you would not ask that question. Plus it is easier recruiting for Bama in states like Florida, Georgia & Texas & it is cheaper then playing a Home n Home series.

UCF will be far better than Louisville next year. Louisville is nothing without Lamar

It’s not quite on the same level as these games, but the Boise State – Oklahoma State game will be a very good game. Wish it happened before guys like Leighton Vander-Esch, Cedrick Wilson, James Washington, and Mason Rudolph left though.

it was very good Game and im From Atlanta Ga

I would say Boise St v Oklahoma St is better than Tennessee v WVU. Boise and Oklahoma St both finished ranked last year, while Tenn and WVU were a combined 11-14

Agreed, whoever made the Louisville as quality opponent must not realize the Cards weren’t that good this year and are losing a phenomenal talent at QB. So Bama, that is no doubt a great team, wants to hang their hat on an average Cards team in nonconf.
A crappy nonconf and a weak SEC west is pretty much a guarantee they’ll be in the CFP again next season

Yes, I agreed, Magic Nick made damn sure it was a perfect time to add the Cardinals to the schedule knowing that Jackson was leaving, this old song & dance again. People even complain when a P5 team is added to the schedule. Louisville has been a great team the last couple of years, please don’t down grade the Cards for having a 7-5 season. Petrino is still the head coach & Louisville can still win the game, if you didn’t noticed, it has not been played yet.
As for the SEC West comments, even if the SEC West was strong next year, it would be hard to beat Bama plus I could say the same thing about the BIG West & Wisconsin cruising through that mess but I choose not too.

The Alabama-Louisville game was announced in August 2015. Highly doubtful that even the almighty Nick Saban knew Lamar Jackson would be a Heisman Trophy winner and then leave after his junior season.

My point exactly! Bama scheduled Louisville when they were at their best. I think “Entire Conference Cheerer” must think that they were added to the schedule last week or something.

I think Bama is an excellent team. Every year. But only being challenged 3-4 times a year is crap. The losers are the fans honestly. Wouldn’t it be great to see Bama play a couple more challenging games a season? Anyone that says no to more marquee matchups isn’t a very good college football fan. Would UCF have beaten Bama this past year? Probably not, but who knows, they never got a chance and they are (And probably probably will be) much better than all but 4-5 teams on Bamas schedule. If Bama, Just schedule them and whip them and shut them up. And the Saban comment, I’m sure he hates games against Mercer, the Citadel and Arkansas state right? Might not be all-seeing, but also not willing to risk much. Oh, and Bama whips my “mighty” team every year lol

SMU was not a good team last yr & UCF played their tails off & could beat them by a TD.

I am excited to see these games, actually I hope that Louisville and Texas A&M have rebound seasons and make their games exciting.

They do not have to is the simple reason. They have made every College Football Playoff playing one neutral site quality opponent according to preseason ranking, 2 Sun Belt teams and an FCS team before Auburn. The committee has never ranked them low because of this pattern.