Ten non-conference games to look forward to in 2017 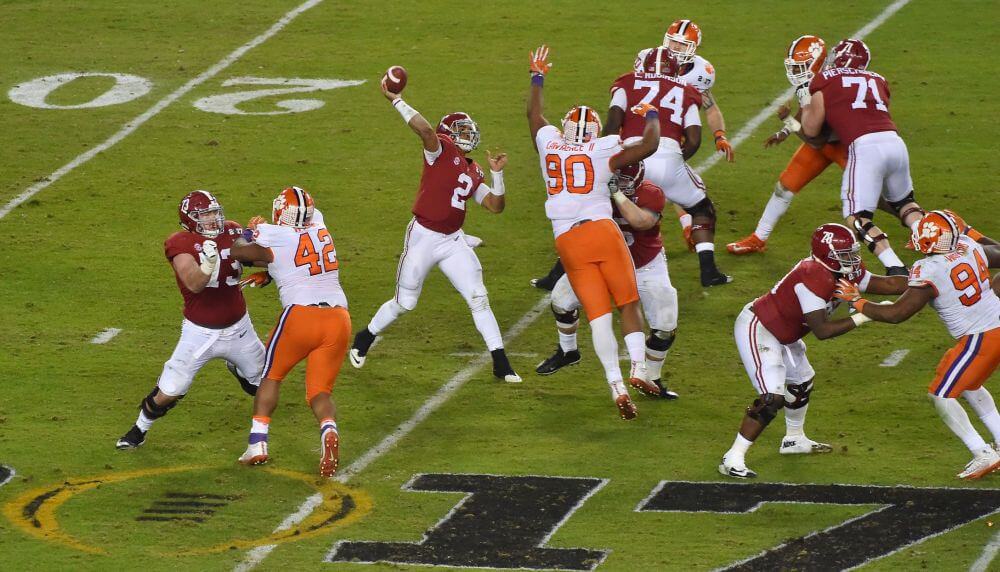 Alabama begins its drive for another CFP title game with Florida State in Atlanta on September 2. (Jasen Vinlove-USA TODAY Sports)

If the CFB Playoff title game taught us anything, it was confirmation that college football really is the greatest sport in the land.

Though we will miss it for each and every one of the 234 days that separate the 2016 championship from the kickoff of the 2017 season, there is much to look forward to.

Yes friend, bookmark this page for future reference. For that harrowing moment when the dark hours of basketball, baseball and golf have diminished your spirits. In reality, the sweet salve of healing is just around the corner.

If you believe in the veracity of ESPN’s Way-Too-Early 2017 Top 25—published in the wee hours after the title game—the 2017 season will kick off with a clash between the top two teams in the nation.

If Mark Schlabach’s predictions hold true, it will be (1) Alabama vs. (2) Florida State to open up both the season and the Georgia Dome’s worthy replacement.

The Crimson Tide and Seminoles have met four times previously, all in the regular season, but not since 2007. Alabama leads the all-time series 2-1-1. The 1967 game, in Birmingham, ended in a 37-37 tie.

Another early blockbuster, ESPN’s early-bird special has Michigan at No. 12 and Florida at No. 21 – making the opener in Jerry Jones’ palace yet another must-see Week 1 game.

Moving ahead to a jam-packed Week 2, Ohio State (No. 6, per ESPN) and Oklahoma (No. 10) complete the back end of their home-and-home series that started this past season.

After hosting Kent State in the opener, the newly-crowned champions will begin their title defense in earnest with a Week 2 visit from Auburn. ESPN has Clemson at No. 5 and Auburn at No. 11, making this game an opportunity for somebody to make a big statement early.

The ACC and SEC Tigers have lots of history, meeting 50 times since first playing in 1899. Clemson has won three straight (including winning 19-13 in last season’s opener), but Auburn leads all-time 34-14-2.

While it remains to be seen if Notre Dame can rebound from its 4-8 finish this past season (its worst mark since going  3-9 under Charlie Weis in 2007), this is still a must-see game.

The Bulldogs and Irish have met only once previously, the 1980-81 Sugar Bowl, a game Georgia won 17-10. ESPN has Georgia at No. 13 in its early predictions.

Where: Autzen Stadium, Eugene, Or.

Willie Taggart’s first test as the head coach at Oregon will come via a visit from the Cornhuskers. Though neither team is mentioned in ESPN’s early rankings, tune in to see how the new-look Ducks perform against a legitimate contender in the Big Ten.

It’s also the back end of a home-and-home series that started in 2016, Nebraska edging Oregon 35-32 in Lincoln. The Huskers lead the all-time series, 6-1, the Ducks’ only win came in 1953. This is the first-ever game between the two in Eugene.

Despite scoring 18 fourth-quarter points, (7) Penn State still fell to unranked Pitt 42-39 last season. If ESPN’s predictions hold, in 2017 it will be the (4) Nittany Lions hosting the (22) Panthers in one of the best rivalry games of the year.

While on the surface Florida Atlantic at Wisconsin looks about as exciting as UNLV at Ohio State, there is more than meets the eye. It will be the first opportunity for new FAU head coach Lane Kiffin to take the national stage, visiting the program ESPN has at No. 9 in its early rankings.

Can Kiffin take a program that didn’t even start playing football until 2001, that hasn’t posted a winning record since 2008, that has never beaten a ranked team, and make them look competitive against a Power 5 team on the road?

FAU and Wisconsin have never met in football.

Even though Texas hasn’t finished a season over .500 since 2013, the hope of new head coach Tom Herman is enough for ESPN to have the Longhorns at No. 25. That, combined with USC’s mention at a lofty No. 3, makes this clash way more than just a rematch of the epic 2005-06 national title game.

It’s also the front end of a home-and-home arrangement that will bring the Trojans to Austin next season. Other than the Rose Bowl title tilt, USC and Texas have met four times, all in the regular season, all wins for the Trojans.

Army’s historic 21-17 win over Navy this past season wasn’t just a relief for Army fans, it renewed national interest not in the pageantry of the event, but in the actual competition.

The Midshipmen won 14 straight over the Black Knights from 2002-15, the longest streak in the 117-year history of the series. Compare that to Army’s best stretch, when it won five straight from 1927-33.

While it may not have the prestige factor of some of the games above, im most looking forward to the Army @North Texas game next season. This looks to be a nice little developing rivalry.

I understand that FAU at Wisconsin is Lane Kiffin 1st game back to being a head coach but this game may be an onslaught. Kiffin has a ways to go before he can get anything going at the Owls & Wisconsin will be LOADED next year.

Should replace FAU/Wisconsin with Purdue/Louisville. Jeff Brohm is taking over a horrible Purdue team after coaching WKU to back to back Top 25 seasons and he will be taking on his alma mater Louisville, the reigning Heisman Winner and what many people thought would be his next job after Petrino retires in Week 1.

i cant wait for clemson to make it back

Gators will have only 1 or 2 losses

Gators have had two very good years under McElwain but injuries killed them this season. Florida needs to step up & get stronger so they can actually compete with the Bama’s & FSU’s & of course Michigan next year.