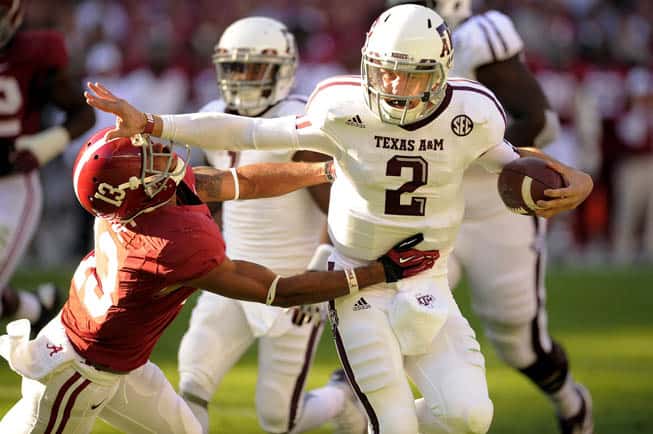 Alabama at Texas A&M could be the game of the year in the SEC. (John David Mercer-USA TODAY Sports)

There are just 37 days until college football is upon us, and Thursday, August 29 marks the first day of games for the 2013 season.

To kick things off, the SEC takes center stage. Here are ten of the most anticipated 2013 SEC football games, listed in date order.

These two on-the-rise programs square off in the first SEC contest of the year on the aforementioned opening day. The Commodores are replacing a starting backfield, and the Rebels are counting on the hype from some key recruits to anchor their team. A win under the lights in Nashville could kick-start a surprise season for one of these programs.

If you think Alabama wants revenge over the Aggies, I’d say the revenge would be a little sweeter for the Bulldogs to avenge the beating they took in Columbia last year. The last time Georgia won this game it was a high scoring affair, and it will have to be again. Another game on the list will be played between the hedges. Can Mark Richt take control of the SEC East early instead of having to come from behind?

This had to make the list, right? Heisman Trophy winner Johnny Manziel, A.J. McCarron, Nick Saban, defending national champions and revenge on the minds of all the Crimson Tide faithful. What’s not to look forward to?

This game is a sleeper to the media it seems. Two teams that could very well end up in Atlanta to end the season will square off. Georgia’s offense should be great this year and Les Miles will have his players ready to stop Heisman hopeful Aaron Murray and crew. Can the Bulldogs right their wrongs from last year and make it to the national title game? We’ll see.

New head coach Bret Bielema poked some fun at Alabama and Nick Saban this spring, and you can tell he’s itching to get started in the SEC. The Aggies visit to Fayetteville marks the start of the Bielema era in the SEC. What a better way for Bielema and crew to get started than to try to knock off Johnny Football and Kevin Sumlin? I’m sure the Razorback faithful will make this a tough environment.

Another game involving Georgia and more revenge on the line. Rivalry games always add to the hype and the Okefenokee Oar is up for grabs in Jacksonville. Both teams could be ranked in the Top 5 when they meet in the River City. Can Florida hold on to the ball this year, or will Todd Gurley take over again? The quarterbacks struggled last year; both teams lost some key players on defense. Don’t expect a combined five interceptions.

This game has definitely not disappointed in the past few years and don’t expect it to this year either. It took late game heroics from A.J. McCarron and T.J. Yeldon last year to overcome the crowd in Baton Rouge. The Tide has the crowd on their side this year, but LSU has an improved and more experienced Zach Mettenberger. Can anyone figure out this defense?

Another game that can and will help decide its respected division. Florida pulled the “upset” in Gainesville last year, beating the Gamecocks pretty badly. The Ol’ Ball Coach vs. his old team is always a fun storyline and Driskel versus Shaw should be a fun match-up this year as they both mature throughout the season.

One of these coaches is already in the process of bringing his program up from the bottom. The Volunteers hope Butch Jones can start that process in Knoxville by beating their in-state rival who handled them last year. Both teams are replacing quarterbacks. This game could be a bowl game clincher for Tennessee, and it will probably come down to the last play as both teams will be evenly matched. It’s under the radar, but it will definitely be a tight game. Be sure to mark your calendars.

This wouldn’t be an SEC list without the Iron Bowl, right? Auburn was bad this year, and can’t have a good taste in their mouth after the schooling they got last year in Tuscaloosa. Auburn looks to score more than the zero points they did last year, and Alabama should come into this game with a return trip to the SEC title game in mind. Can Auburn and War Eagle ruin the Tide’s year?

What about TAMU at Ole Miss in October? Ole Miss should have won the game in Oxford last year as TAMU turned the ball over SIX times. This was the game where Robert Nkemdiche realized he wanted to sign with the Rebels.

here’s to hoping that the ole miss black bears never win a game..

A&M/LSU should be in there too

Alabama at Texas A&M is probably the most interesting for me and I am not even close to a fan of either team. But this should have the revenge factor and everything going for it and Bama going to College Station should be fun.

Well, let’s remember that it was Papa Bear that left A&M and went to Alabama to help start that dynasty. Now Sabin has to come to Kyle Field and try , yes I said try, to defeat the Aggies at this very loud backed Aggie Team before the “12th Man….gonna be a good game , but I thinks that Manziel and Team , backed by Aggie Supporters, will emerge on top……

Johnny Football Heisman vs. Pig Sooie will be so awesome, it merits both a top 10 AND an honorable mention!

I noticed that as well. Darn editors missed that one. Or the writer REALLY likes that game.

Alabama beats Texas A&M 35-17, lets keep in mind no team has EVER beat nick Saban two times in a row

Lsu did it lol

Lsu is the team to beat this year.

Yes, But, there “ain’t” no BURN like an old AU-BURN. (Sorry, we just like to hunt west of there.)

If Gamecocks beat georgia their second game, it’s lights out for the rest of the sec. Game of the season. GO COCKS!

Still scratching my head as to how the Gators ended with the record they did. Could have beaten the Dogs in Jax., but that loss saved us from humiliation in Hot ‘Lanta by Bama. Gators should be improved this year, but may end up with a worse record. Go figure!
Louisville set the record straight at the Sugar Bowl.
S.C. to beat the Gators this year imo. Likely no Atlanta trip at season end for the Gators. Pulling for Spurrier to set the East Div. of SEC on it’s ear. SEC West is bad to the bone w/A&M, BAMA, & LSU clubbing each other. Could see a West Div. winner via tie-breaker and dare I speculate, a two loss West Div. record going into the SEC. C. game in Atlanta?
That last quip ought to ignite some fireworks.

Ole Miss REBELS are ready to take over the SEC!!!! Hotty Toddy!!! Just sit back and watch!!!

For all u haters BAMA will beat A&M but it won’t be easy or a blowout. [email protected] AINT WHAT U PPL THINK THEY R BUT BAMA IS THE REAL DEAL DONT BELIEVE ME????? LOOK AT THEIR HISTORY AND THEIR STATS

Not a bama fan I have to admit, but they are sec and have been for a while, so I will give you and them my respect and props, unlike these A and M new comer rookies you mention. Last I check didn’t Auburn beat them at home yesterday 10/19/2013

Ol’ Timey, huntin and fishin Gamecock and Clemson fan here says… Bama kills A&M by 14 or more, in there own back yard, Georgia beats Gamecocks, Georgia beats Fla., Georgia loses again to Bama in Title game, and LSU’s Les Miles glad he don’t play Gamecocks this year. Surprise Surprise !!!! Clemson takes down Dawgs but Dawgs beat Cocks outta Title game with Bama. Lucky Bama tell you what! SC have a better chance on Bama! Look at the lineup like you know what you’re looking at and tell me ! Thanks all!

LSWHO? HOME OF THE 12TH MAN….NEEDS TO GET A 13TH IF THEY WANT TO BEAT BABMA AGAIN. GAMECOCKS?? REALLY…ROLL TIDE BRING ON THE VOLS!!