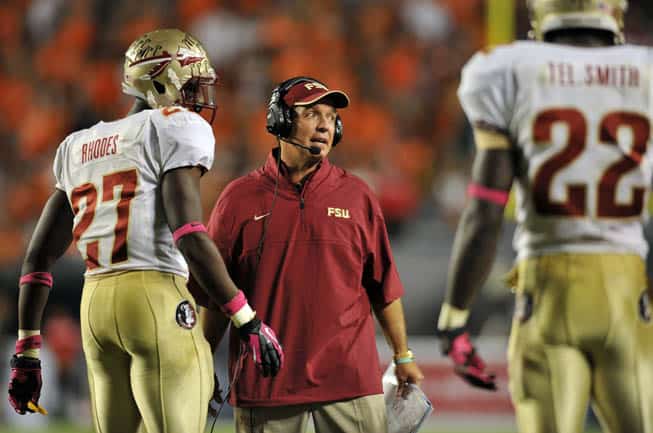 With the SEC’s most anticipated games already released, we move on to the ACC.

With the addition of Pittsburgh, Syracuse and Notre Dame — sort of, anyway — the ACC has improved it’s conference athletically. Pitt and Syracuse look to adapt to ACC play as we count down our most anticipated games of the 2013 ACC schedule.

I think this might end up being one of the best games of the ACC season when all is said and done. Pittsburgh will definitely be prepared for their debut game in the ACC against a team like Florida State. Opening weekend, favored team on the road, on Monday? I’m all for Monday night college football.

Virginia Tech should be a viable contender in the Atlantic division this year with Logan Thomas at the helm, and these Thursday night prime-time games always play a big role in who represents the division in Charlotte. The Yellow Jackets opened in Lane Stadium last year, and lost by 3. Paul Johnson will be trying to beat the Hokies for the first time since ’09. Look for this to be a slug fest.

This game is obvious. Is the newcomer going to compete for the division title right off the bat, or will it take them a few years to get up to the level of the ACC elite? Having Clemson away from home should help, though I’m assuming Clemson’s athletes will just thrive on turf.

North Carolina is in the same “never been to the ACC title game” boat that Miami is sailing. If either one wants to make a push this year, this one could decide who breaks the barrier.

You missed a great game if you didn’t watch this one last year. Florida State prevailed, but Clemson gave them everything they had. Howard’s Rock — what’s left of it anyway — should fuel the Tigers in the should be Atlantic Division championship game.

There is a lot of hype behind these two teams coming into the year, and a lot of it is on the offensive side of the ball. Jameis Winston for the Noles’ and the entire offense for the Hurricanes are all the buzz in Florida. The last time the ‘Canes visited Tallahassee they only lost by 4; they know they can compete with the ‘Noles. This one should be high scoring, as long as both quarterbacks play like they have shown.

Miami is trying to become the first team other than Virginia Tech or Georgia Tech to represent the Coastal division since the ACC Championship was created. They’ll have to match last year’s effort in which they bested the Hokies in Miami.

With Clemson playing in an environment like Death Valley, you would expect them to get a few more prime time games. This cross-divisional match up gives you that. Again, Paul Johnson will have his Yellow Jackets in the mix, and Tajh Boyd and company will have national title hopes. There’s more riding on this game than meets the eye.

Newcomers to a conference always means anticipation. These two teams have a history, the most recent chapter being a one point win in the Carrier Dome for the Orange last year. Let’s take the roof off and add some snow. That’s good football.

Once again, we have a newcomer coming in against a team that should be at the top of the ACC standings. Though the Syracuse-Clemson match-up puts a former conference champion against a newcomer under the new format, Miami is better athletically than almost any team that Pitt played in the Big East. Pittsburgh was lucky enough to get Florida State and Miami at home, that’s not a big gig.

Too bad the Miami game with Florida cannot be listed because it is not an actual conference game. This is a pretty good list of best conference games. Not sure FSU at Pitt is a good matchup as much as an interesting matchup since it is Pitt’s first ACC game though. Miami at UNC will go a long way in deciding who will play Clemson or FSU it ACC title game…probably.

Thanks for the read, Bill! I’m not sure this will end up being a close game (though I hope it does) but like you said the interest is high, hence why it’s on the most anticipated list.

You might as well have had the Title “Ten ways to watch paint dry”, because the only important matchup is FSU at Clemson. FSU and Miami used to be a big matchup, but as far as Title hopes, this game hasn’t been important since the 2000 season. We might see a 1 loss Clemson or FSU team not playing for the ACC Championship, and possibly an 8-4 team play instead. The ACC is and always will a Basketball Conference.

Fear not, Andy has an article coming tomorrow re: paint drying.

I believe Syracuse and Pitt are going to demonstrate one more time that the level of play in the ACC is not very good and they will be dominant in their first year in the conference. Does anybody remember when West Virginia scores 70 against Clemson

That was in 2011!!!! Get up with the times. We beat LSU and Georgia in two consecutive games.

First, not that it matters, as the hokies will struggle to even be bowl-eligible this season, but Va Tech is in the Coastal division. Obviously, FSU v. Clemson is the most-anticipated game. Then, it would be FSU v. Miami, given that Miami is supposedly going to be a contender this season. We will see. UNC is an intriguing team, so the game between the Heels and the Canes might spur some anticipation. As usual, there are only two or three relevant teams in the entire conference. You might as well write about OOC games. There are definitely some that are highly anticipated.

Being a Clemson fan, I feel that a marque catchup that was left out, is Clemson at B
N.C. State. The woolpack beat Clemson soundly two years ago in Raleigh, and last year beat a number 3 seminoles team. They have the tendency to beat teams that by all rights they shouldn’t. It will be interesting for sure

But that doesn’t matter because FSU and Clemson will always be the Atlantic game that is looked forward too because the winner of that always goes to the ACC title game. No matter what team loses to N.C State. As a FSU fan I say that yes N.C State is a look out for team. But its no threat to at least a conference title game.

Stupid auto correct, you guys can tell what I meant

I bet y’all look crazy now cause FSU is UNDEFEATED

FSU going to the acc championship

Im a clemson die hard fan & i ride with my tiger .no matter who they play im pulling for my clemson tiger 4 life .