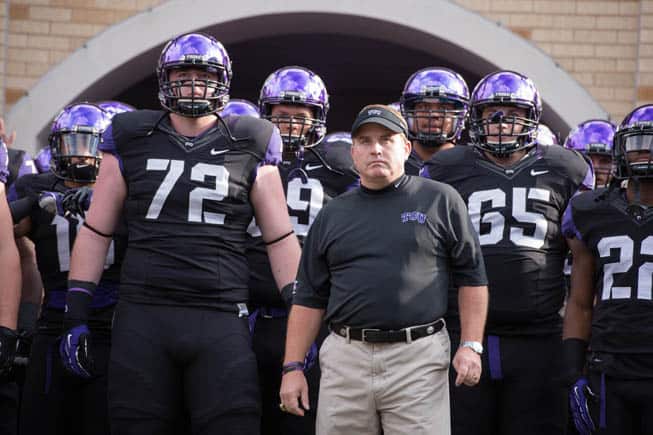 The TCU Horned Frogs have added the Stephen F. Austin Lumberjacks to their 2015 football schedule, SFA announced this morning.

The game will be played at Amon G. Carter Stadium in Fort Worth on a date to be determined in 2015. Based on TCU’s currently scheduled games, it should be either Sept. 10 or Sept. 26.

TCU and Stephen F. Austin’s first and only meeting came in 2008 in Fort Worth. The Horned Frogs crushed the ‘Jacks 67-7.

The addition of SFA tentatively completes the 2015 non-conference schedule for TCU. The Horned Frogs are currently set to open the season at Minnesota on Sept. 3 and then host SMU two weeks later on Sept. 19.

Wow, another blockbuster announcement. It must be a slow newsday. How about Incarnate Word , like Baylor has just done-now that would be a blockbuster!

these are huge blockbuster match-up’s Dave, I don’t understand why you had to be so sarcastic!

Travis. Will I be able to get tickets or is the game already a sellout?

I thought Dave was kidding about Baylor scheduling Incarnate World bu no Baylor has done just that. I am soon expecting Baylor to cancel the home and home series with Duke.

At least TCU does fine at least one real opponent each year. Baylor just heads to the cupcake shop. .

Yay, another FBS/FCS matchup to look forward to. College Football would be SO much better without these games on any schedules.

I couldn’t agree with you more. I’d love this stipulation to be added by the NCAA … if an FBS school schedules an FCS school and loses to the FCS school then the FBS school cannot participate in a bowl game or the national playoffs (which should be a given I would hope).

It would be, but the big schools need these “buy” games for revenue.

I disagree, as you forget that the FCS schools are still Division I. That’d be like saying Michigan State can never play New Orleans in basketball because the disparity in divisions. And you know what? It’s really not uncommon for the FCS school to win, and they’ve been moving up to FBS at a pretty frequent rate lately.