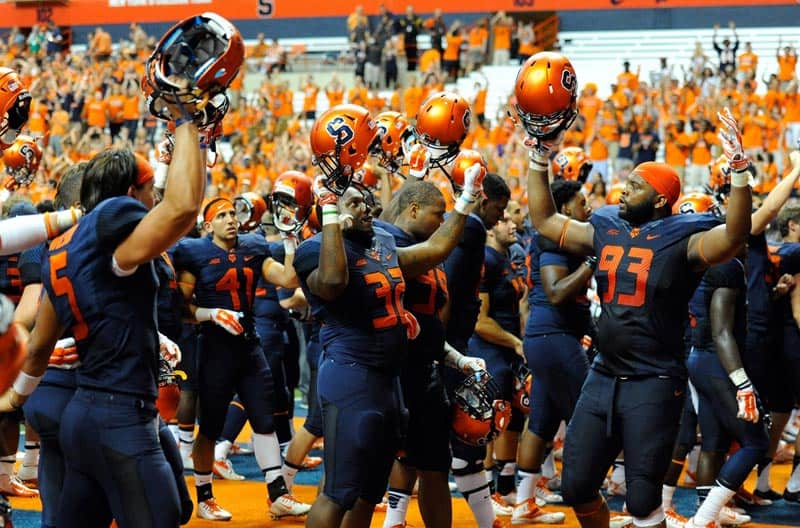 The Syracuse Orange and the USF Bulls have scheduled a home-and-home football series for 2015 and 2016, both schools announced today.

“We are very excited to renew a home-and-home series with a program with the tradition and history of Syracuse,” USF Director of Athletics Mark Harlan said. “We are committed to playing a very competitive non-conference schedule against some of the top programs in the country and it is exciting to be able to bring these programs to Tampa and continue our tradition of facing top level opponents in front of our Bulls fans in Raymond James Stadium.”

The 2015 meeting will be the ninth overall between Syracuse and USF. The previous eight meetings between the two all came when both schools were members of the Big East Conference.

“This series gives our program important exposure in Florida, and renews a budding rivalry we had before joining the ACC.  This gives many of our student-athletes a chance to play in front of their friends and family, and solidifies our upcoming schedule with quality opponents across the board,” said Syracuse Director of Athletics Dr. Daryl Gross.

Syracuse has now completed their 2015 non-conference schedule and has three games slated for the 2016 season. In 2015, the Orange are slated to host Rhode Island on Sept. 5, Central Michigan on Sept. 19, and LSU on Sept. 26.

The 2016 season will see Syracuse host Colgate on Sept. 10 and take on Notre Dame on Oct. 1 at MetLife Stadium in East Rutherford, NJ.

USF has now completed their non-conference schedule in 2015. The Bulls open the season vs. Florida A&M on Sept. 5 and later make back-to-back trips to Maryland on Sept. 19 and Florida State on Sept. 26.

In 2016, USF is scheduled to open against Towson on Sept. 3 and then hosts Florida State on Sept. 24.

Good to see FSU is playing home and home vs USF since they aren’t a P5 school. They are also doing home and home with Boise. A lot of P5 will only do pay games vs non P5’s or neutral site games like Boise has done twice with SEC schools

Most schools already have 2015 set. If they are filling slots it’s usually their FCS school or cream puff spots

FSU? Where? What do you mean?

If I’m FSU I let usf rot on the vine …. two years ago the way treated FSU fans, the band, etc was BUSH league