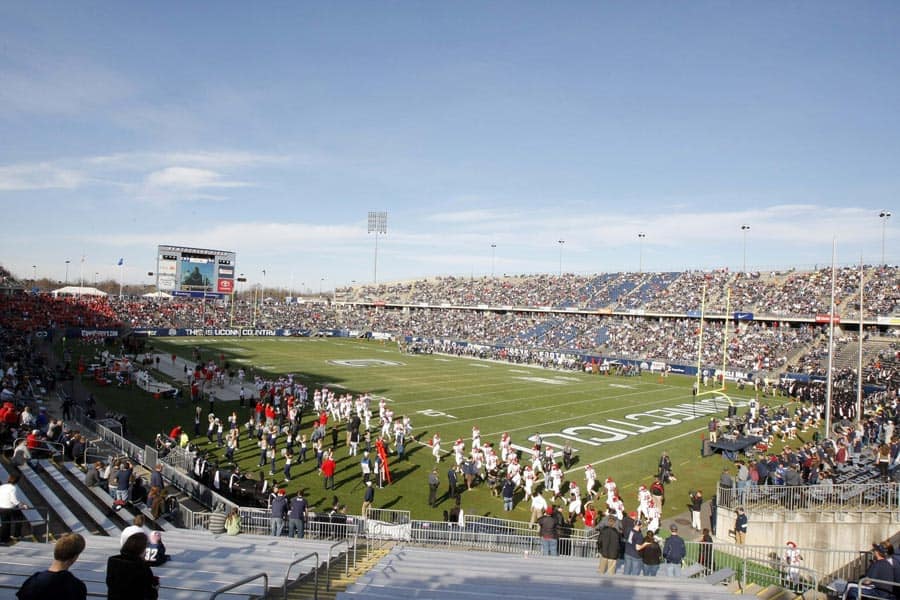 The Syracuse Orange and the UConn Huskies have scheduled a home-and-home football series for 2016 and 2018, the Hartford Courant has confirmed.

News of the future series was first reported on Friday by Brett McMurphy of ESPN.

In the first game of the series, UConn will host Syracuse at Rentschler Field in East Hartford on Sept. 24, 2016. The Huskies will then travel to take on the Orange at the Carrier Dome on Sept. 29, 2018.

Syracuse and UConn have met nine times on the gridiron. Each matchup took place from 2004 through 2012 when both were members of the Big East Conference. UConn leads the series 6-3.

The addition of UConn tentatively completes the non-conference portion of Syracuse’s schedule in 2016. The Orange are also slated to host Colgate (Sept. 3), USF (Sept. 17), and Notre Dame (Oct. 1, at East Rutherford, NJ).

UConn has also tentatively completed their 2016 non-conference schedule. The Huskies are also scheduled to host Maine (Sept. 3) and Virginia (Sept. 17) and travel to UMass (Sept. 10).

Wow!!! 2 former has been Big East teams playing each other. In other words, who really cares about this matchup?

It'[s reasonable to assume that both Syracuse and UConn fans care about this matchup.

The ACC should add UConn and UCF.

I think the ACC has enough teams at 14 1/2!! Add two more it would take 10 years to play all the teams in the conference!!

…and gain, what, exactly?

It’s wishful thinking on my part. I wish that there would be no more conference expansion. Rivalries are ruined and that’s not good for college football.

The AAC should expand to 14 teams by trying to add Georgia Southern and NDSU and honestly the Big12 should add 2 more teams.

The big 12 will add BYU and Louisville,the 4 power conferences will have 16 teams each.All the rest will be fodder for whoever wants to see them play as they wont be part of the national playoffs.Kentucky and Virginia are in their last year of football before they fold.Several other teams will follow in the next few years,money talks,bullshit walks.
+

I can see BYU going to the Big-12 one day, Lousiville just became a part of the ACC so I don’t see them leaving. As for Kentucky & Virginia football programs folding, first I ever heard of it. I highly doubt it due to this is where most of the money comes from whether they are bad or not.