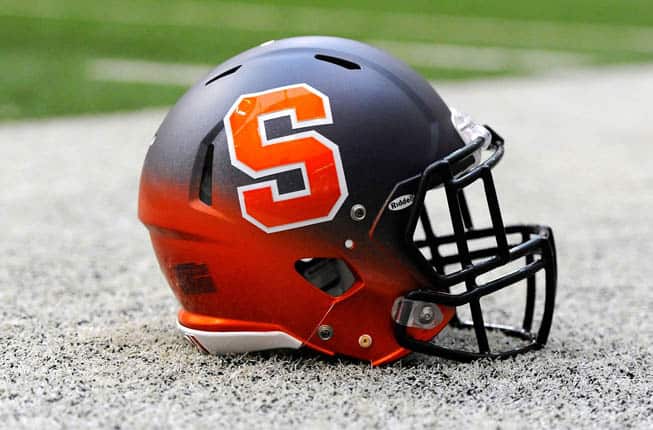 The Syracuse Orange have completed their 2014 non-conference football schedule with the addition of games against Central Michigan and Villanova.

Syracuse will host Villanova at the Carrier Dome on Aug. 30 to open the 2014 season. The Orange and Wildcats have met on the gridiron three times, most recently in 1975.

The Orange will then travel to face Central Michigan at Kelly/Shorts Stadium in Mount Pleasant on Sept. 13. In their first and only meeting in 1999, Syracuse defeated CMU 47-7.

The series with Central Michigan is a new addition to Syracuse’s future football schedules. Syracuse will host CMU at the Carrier Dome in two seasons that will be announced at a later date.

On Sept. 20, the Orange return to the Carrier Dome to host the Maryland Terrapins. Maryland will be a member of the Big Ten beginning next season. The two schools meet this season as ACC foes on Nov. 9 in College Park.

Syracuse’s final non-conference game of the 2014 season is against Notre Dame at MetLife Stadium in East Rutherford, NJ. The series between Syracuse and Notre Dame is tied at three games apiece.

Dates for 2014 ACC games have yet to be announced, but Syracuse will host Duke, Florida State, Louisville, and NC State and will travel to Boston College, Clemson, Pittsburgh, and Wake Forest.

Wow. CMU is getting Oklahoma State, Kansas and now Syracuse at home after having hosted Michigan State last year. Some good grabs there… Fire Up!

Central’s scheduling has really beefed up. I don’t know what they’re doing to get teams to go to Mt. Pleasant, but it’s working. Mt. Pleasant weather probably isn’t too bad in September, though.

When is Jim brown coming back to beat some white women

When you stop wearing pants and put on dresses.