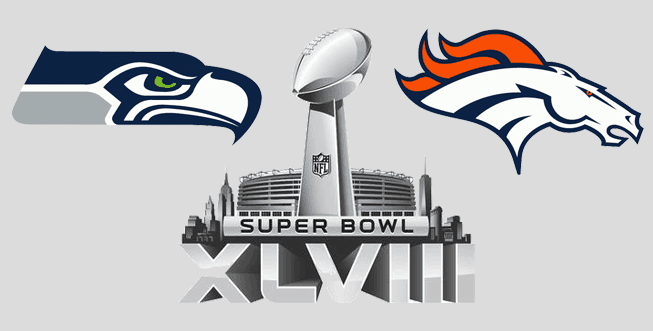 Super Bowl XLVIII will feature the Seattle Seahawks vs. the Denver Broncos. The game will be played on Sunday, Feb. 2, 2014 at MetLife Stadium in East Rutherford, NJ (6:30pm ET, FOX).

Seattle (15-3) made it to the Super Bowl after defeating New Orleans 23-15 in the Divisional Round and San Francisco 23-17 in the NFC Championship Game.

Denver (15-3) advanced to the big game by beating San Diego 24-17 in the Divisional Round and New England 26-16 in the AFC Championship Game.

A big story for Super Bowl XLVIII will be the weather. With the game in New Jersey in an outdoor stadium in winter, the temperature is currently predicted to be in the upper 20’s at game-time.

Of course, there’s also the chance it could snow at the Super Bowl, but meteorologists won’t be able to predict that accurately until the game gets closer. They even set up the website WillItSnow.com to track the weather for the game, and currently they say it will not snow.

This will be Denver’s seventh Super Bowl appearance and Seattle’s second. The Broncos are 2-4 overall, while the Seahawks are 0-1.