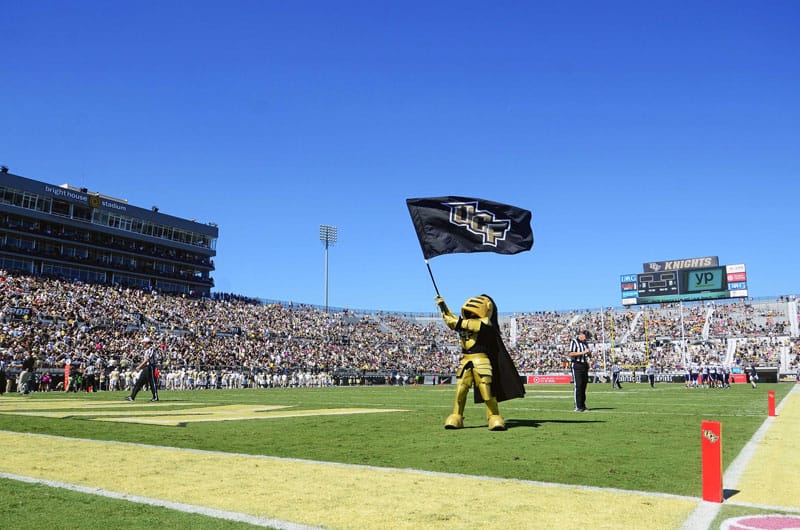 The Stanford Cardinal and the UCF Knights have scheduled a home-and-home football series for 2015 and 2019, both schools announced today.

Stanford and UCF have never met on the gridiron. Barring any other schedule additions, Stanford will be the first Pac-12 opponent to visit UCF and first opponent the Knights have played from California.

“We look forward to playing UCF as our first game against a Florida-based school,” said Bernard Muir, the Jaquish & Kenninger Director of Athletics at Stanford. “UCF is a rapidly growing campus with a tremendous venue for football, one that our fans will enjoy visiting.”

The addition of UCF tentatively completes the 2015 and 2019 non-conference schedules for Stanford. In 2015, the Cardinal open at Northwestern (Sept. 5) and close the season vs. Notre Dame (Nov. 28), while in 2019 they again are slated to visit Northwestern and host the Irish on unannounced dates.

UCF now has three non-conference games scheduled for 2015. The Knights visit South Carolina on Sept. 26 and travel to FIU on a date to be determined.

Stanford is the first announced non-conference opponent for UCF for the 2019 season.

Central Florida has played a Pac-12 opponent. Arizona State in 2002.

It said Pac-12 opponent from California.

Thanks, read it wrong.

Thanks, read it wrong.

UCF plays FIU at home next year. The UCF-FIU series was delayed one year primarly because the Ireland game against PSU.

Glad to see this series,should be quite good if both teams,especially UCF,can maintain their high level of play.

UCF is a well coached team which I think is fundamentally sound on offense and defense. While they do not recruit at an elite level they can play a good game with just about any P5 program.

Stanford seems to be going to a OOC schedule of 2 P5’s and decent mid major. They also seem to be not scheduling in state mid majors, which was their staple previous before. They have OOC filled thru 2019 with no in state mid majors. 2020 ans 2022 they have BYU and Northwestern booked and likely ND those years too b/c ND wants to get to CA every year and they do it via USC and Stanford. You never know since Stanford is good now ND might replace Stanford with Cal b/c they aren’t very good.

Muir’s quote of “UCF is a rapidly growing campus with a tremendous venue for football, one that our fans will enjoy visiting.” makes me chuckle for a couple of reasons.
(1) UCF has been the second largest college in the nation for five years, and #3 for a few years before that. It’s not ‘rapidly growing’ any longer, they’ve actually now held enrollment at current levels for some time. The campus is huge though…
(2) Venue on campus, of course is superior to the Citrus Bowl! It isn’t in downtown Orlando. It’s certainly easier now to get to the UCF campus direct from flying into MCO than it was to get to downtown, too. Not a lot of hotels out that way though.
If UCF keeps this up, it’s going to be really hard for one of the P5 needing another team not to consider them. As a research institution, it’s quickly moving up THAT ladder rapidly.

Excited about this match-up, really happy to see UCF trying to schedule real good programs for home-and-home series. I do believe 2015 will be a good year for them, shoot even this year, curious to find out who they will fill that final spot with for 2015. Stanford better not underestimate them, even with home field advantage UCF proves to be quite tough on the road. With that said Missouri this weekend needs to be careful when they host the Knights.

Talk about difference in cultures. The old school (Stanford) with old ideas, old campus, and old research versus the up-and-coming school known for adaptive FPGA algorithms, cyber-warfare breakthrough, landfill mining research, and bamboo-rebar concrete (UCF). Facilities – what it as taken Stanford to accomplish in 50-100 years UCF has done in 10-50 – Medical School (last five years) new stadium (2007), new basketball arena (2007), indoor practice facility (2005) – all within the 21st century. Looking forward to the game and planning to take the red-eye from MCO to San Francisco International, see part of the “Quasi old country rust belt” In Palo Alto, and enjoy the “Semiconductor museum mentality” in the valley.

Ha, ha…you’re kidding, aren’t you, Mike….linking Stanford with “rust belt”, “old ideas” is a quite humorous…and if you didn’t mean it as a joke, I’m glad you’re going to get a chance to update your information by coming out to Palo Alto.