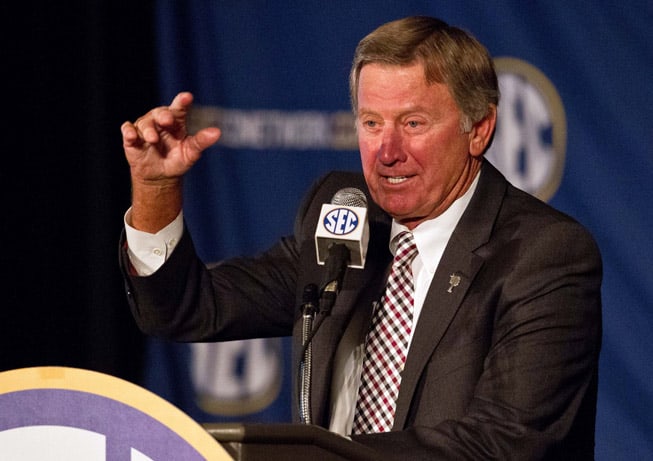 South Carolina head coach Steve Spurrier is never one to mince words, and today at SEC Football Media Days was business as usual for him.

Responding to a question about Texas A&M and their status in the SEC, Spurrier took the opportunity to give his opinion on the dormant Texas-Texas A&M rivalry.

“I think it’s a shame that Texas and Texas A&M don’t play each other, though. I don’t mind saying that,” Spurrier said. “Two schools that have been playing for over a hundred years, just because one of them joins another conference, get mad at each other, we’re not playing you anymore, we’re not playing you anymore. So I don’t know. I think it is sad.”

Steve Spurrier went on to point out that some of the in-state rivalries in the SEC are still being played.

“Florida plays Florida State. We play Clemson. Georgia plays Georgia Tech. We’re in different conferences, but they are in‑state rivals. The fans want to see that, to me.  They want to see you beat the guys next door, the neighbors. I think it is sad. I know they’re not going to play each other. That’s just my opinion anyway.”

If you’ll recall, Texas A&M left the Big 12 Conference for the SEC in 2011 and haven’t faced the Longhorns since. Prior to that, Texas A&M and Texas had squared off annually since 1915.

But with the two now in separate conferences, they aren’t scheduled to play and likely won’t be in the near future. Last year, former Texas athletics director DeLoss Dodds said “we get to decide when we play again.” That was followed up this year by new AD Steve Patterson who said UT needs a “compelling reason” to play the Aggies.

New Longhorns head coach Charlie Strong offered the opposite opinion at his introductory press conference, saying “oh yeah, you would love to” when asked about rekindling the series with the rival Aggies.

Texas A&M head coach Kevin Sumlin and athletics director Eric Hyman have been less chatty on the subject of the Longhorns. But maybe we’ll hear something when the Aggies hit the spotlight this afternoon.

I agree, one of the great rivalries died!

The only way it can be saved is if they meet in a bowl game or the BCS National Championship Game.

Hopefully it will get rekindled in the future, perhaps we’ll get some new high-powered rivalries with all the conference realignments.

this just goes to show you how powerless the fans are. Maybe with enough fan support the powers that be will rectify the situation.

This all about Texas being brats and realizing they are on a down swing and have been for several years and A&M being on a upswing following the manziel years. A&M is getting much more exposure from being in the SEC. A&M will get many more national tv games in the SEC than they did in the B12

Only as long as they win. They are not AL or LSU.

LSU and AL have had close calls with A&M every season so far. I think our new more well rounded quarterback is going to liven it up more this season then expected. I can’t wait to see that first game. It’s ashame its going to be in AL though.

Once rolltide losses AJ they will be hurting because he barely evaded manziel.

A&M Got beat by Alabama in 2014 59-0, lest we forget. If anything, A&M are the brats, they have been playing little brother to the Longhorns for years, and now that they’ve left for the SEC, they continue the stupid little tiffs. Texas played TCU and got whooped, so at the Alabama A&M game the following week they put the score of the TCU/Texas game on the stand screens, then proceeded to lose to Alabama, whom they lost to in 2014, by an even larger margin than Texas to TCU, following it up with another 2015 loss with 3 Pick 6’s.

its also a shame we (Auburn) dont play Clemson. FSU or Georgia Tech much anymore

I for one don’t understand why the SEC does not step in and try to talk Texas into renewing the game. It would be good for both schools and conferences. I think Texas and Texas A&M as well as Kansas and Mizzou should play each other. It lines up with a good end of season game between two instate teams. Less travel for families during holiday season. It would add to the list of great cross conference in state games for the SEC. FSU vs Flo, Georgia vs GT, Clemson vs SC, Texas vs Tex A&M, Mizzou vs Kansas. You can even throw Kentucky vs Loisville. That would be a great line up. You can leave the Ala vs Aub, Miss vs Ole Miss, Ark vs LSU, and Ten vs Vandi alone as season enders. that line up would dominate the TV coverage for an end of a season.

If it was to be renewed, it would not be an end of season game, those are reserved by conference opponents. It would be a beginning of the season game, when non-conference games are played. These games are booked many years into the future, and Texas has a full schedule through 2018, and 2019 would be the earliest.

If you recall; Texas, Oklahoma, Oklahoma State and Texas Tech were all recruited by the Pac 12 and when Texas said no, the Pac 12 said, no deal without Texas.

Texas isn’t sulking. eATMe tucked their tailed and ran because they can’t stand to continue to lose to their big brother every year. They would rather be a cellar dweller in the SEC than win the Big 12 while losing to Texas every year.

well according to Texas athletics director DeLoss Dodds *we can choose whether or not we play texas A&M.* i guess he choose not to play texas A&M this year because he was afraid texas would loose to texas A&M this year. A&M beat arkansas this year 2014. and texas just lost big time to arkansas 2014 so it seems Texas athletics director DeLoss Dodds made the right choice.

TAMU versus tu on Turkey day like it always was. Half the family was Aggies and the other half Longhorns. Made T-Day even more special!

Yep I agree with Randy! I miss getting up from the table and watching the A&M vs Texas game ever year!

Who knows really why A&M left. I do know this; the Texas- Texas A&M Thanksgiving game was for the bragging rights to the whole state. That is everyone’s loss.

Miss the game on Thanksgiving it was a annual thing to do eat and watch the game,and have a good day.

Taking the SEC up on their offer was the best decision A&M ever made!! As a long time Aggie I can remember the years when Darrel Royal was signing up every kid in the state (and OK) that could mumble ‘hook um’ just so none of the other teams in the SWC could have a shot at them. This was an era when there was unlimited recruiting and, if the kid could breathe moisture on a mirror and genuflect to a cow, ole’ DKR would give them a jersey. AND THEN MOST OF THEM WOULD BE “ALLOWED” TO SIT ON THE HORNS BENCH FOR FOUR YEARS! Hell, with a scheme like that the water boy could have coached a team to the cotton bowl. Just to prove my point look how those ole ‘red headed stepchild schools’ that tu always used for target practice (like TCU and Baylor) are now considered formidable foes. Isn’t it amazing what a ‘level playing field’ (no pun intended) will do?
Naw, I don’t miss those old ‘turkey day’ games a bit because I always thought the dice were loaded anyway. However, ALL of my meals have recently started to taste a helluva lot better, especially when I see one of the ‘red headed step kids’ chalk up a 50 to 7 victory over the cows. HOORAH!
So, with all due respect Coach Spurrier, you can take that turkey day game and shove it. I would much rather suck on crawdad heads in Baton Rouge with a bunch of friendly coonasses than eat tofu on sixth street in Austin with a bunch of goofy lawyer wannabees.
The Gunfighter ’57

years of TRIDITION.wondered why I didn’t get the game anymore. thought its because I now live in NM. no Texas-Aggie game after 94 years of TRIDITION. What MORON thought up that stupid f-ing idea? should have been hung from the nearest mesquite tree. NO Texas stadium, NO Dallas Cowboy stadium, & now NO Texas-A&M game un-friggin’-belivable~!!! GBA

I believe the Israelis and the Palestinians will be at peace with each other before Kansas ever plays Mizzou again.