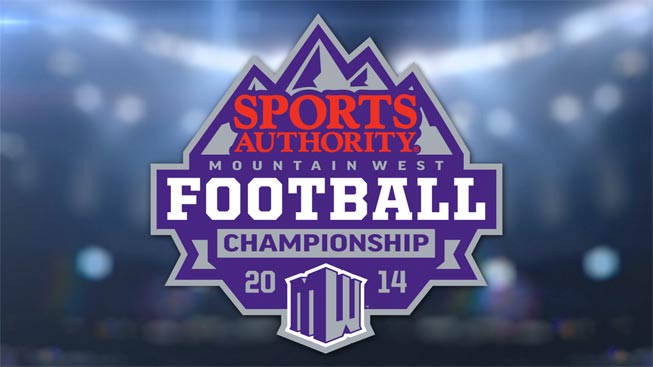 Sports Authority has signed on as the title sponsor of the 2014 Mountain West Football Championship Game, the MWC announced today.

The 2014 Sports Authority Mountain West Football Championship will be played on Saturday, Dec. 6 at 10pm ET. The game, which will be nationally televised by CBS, will pit the winners of the Mountain Division and the West Division at the home stadium of the higher ranked team.

“We couldn’t be more excited to have Sports Authority on board as title sponsor-a premier, national brand that shares our love of sports,” said Mountain West Commissioner Craig Thompson. “We value the support of Sports Authority and look forward to the football championship.”

“We are thrilled to sponsor the Mountain West Football Championship and continue to engage recreational athletes and families with the Sports Authority brand,” said Michael E. Foss, Chief Executive Officer of Sports Authority. “Sports Authority believes in bringing together communities through the power of play and we encourage everyone to discover the good in sports.”

Does anyone care about this game? It will be played in a small stadium with plenty of empty seats and will have 2 unranked teams playing for a trip to Las Vegas to play the 7th ranked PAC12 team. How does this generated any excitement?

Dave, I’m sure the students and alumni of the two schools playing care about this game. It may not determine the national championship, but it’s just as important to the schools fans as the SEC Championship is to those schools fans.

“The game, which will be nationally televised by CBS, will pit the winners of the Mountain Division and the West Division at the home stadium of the higher ranked team.”
.
Ehhhh, what’s up, Doc?

It is at the home field of the higher ranked team, so the stadium will probably be pretty full.

There were 10,000 empty seats last year at Fresno State. I’m just being honest.

Cut the snobbery, Dave. A LOT of people will care about this game. CBS wouldn’t be televising it nationally if it were otherwise.

It is not snobbery to tell the truth. Some people get a bit defensive when they are uncomfortable with the facts. College football is very popular and as such this game will certainly draw a fair audience not because of the stature, or importance the game, or the teams involved but simply because it is football. The true facts remain that the game will be played in very small stadium, probably not sold out, between 2 undistinguished teams, likely not ranked in the top 25, with the winner going to the Las Vegas Bowl for a pre Christmas afternoon game in a stadium that the sponsors will need to work hard to fill (capacity 36,000) against the 7th place team in the PAC12.

Dave, you do realize that the ‘distinguished’ teams are only so because of two factors, right? History and television money. Success in recruiting is a direct outcome of those two factors. Should the teams from the Group of 5 have signed de facto ‘giveaway’ deals over the past twenty years that effectively forced them into a less-than-equal status? Probably not. Many of us truly believe that college football is more than Alabama, Notre Dame, and USC. 6-1 Colorado State has beaten both Boston College AND Colorado this year. Nevada got past WSU. MWC bottom-feeder Hawaii almost upended Oregon State AND Washington. Many of us appreciate our alma mater and laugh at comments on message boards proclaiming the academic prowess of such schools as Penn State and the University of Georgia.

A 16 team playoff (10 conference champs and 6 at-large teams) is necessary as such a system will allow games like the MWC Champ. game to ‘mean more’ to both students, fans, and players.

Sounds like your the only one on the defensive side DAVE! No body else is complaining about this game. I promise you if this game is in Boise the game will be sold out. Spend a day outside of your perfect little world for once.