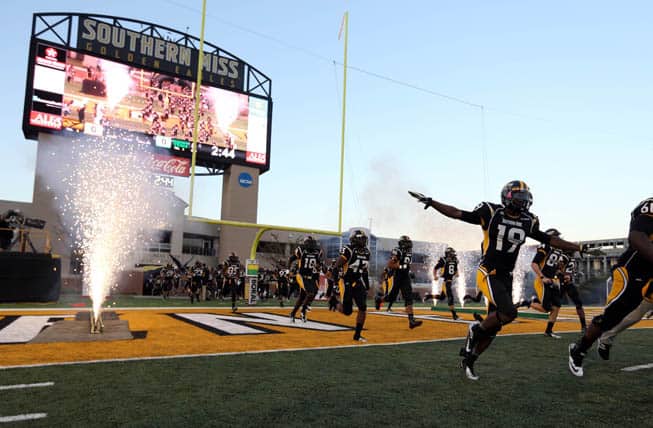 Southern Miss will open the 2014 season on the road against the Mississippi State Bulldogs in Starkville on Aug. 30. USM then kicks off its home schedule the following week against Alcorn State at M.M. Roberts Stadium.

On Sept. 13, the Golden Eagles travel to Tuscaloosa to take on the Alabama Crimson Tide. USM’s final non-conference game of the season is at home on Sept. 20 against the Appalachian State Mountaineers. ASU is moving up to the FBS and will officially join the Sun Belt Conference next summer.

“I’m very pleased with the balance we’ve been able to achieve with our 2014 schedule,” said McGillis. “Obviously, it will be highly competitive with a blend of quality opponents, including the defending national champions in Alabama, in-state games with Mississippi State and Alcorn State and an emerging FBS program in Appalachian State. The scheduling of six home games was our most important objective in 2014, and I’m excited for our fans, coaches and team that we were able to make that happen.”

Southern Miss was previously scheduled to travel to BYU on Nov. 8, 2014, but that game has been postponed to a date to be announced. USM is still slated to host the Cougars on Oct. 17, 2015.

Good call scheduling Alcorn in Week 2. Maybe the streak will end at 25 games.

they should have also done Presbyterian and Davidson…….not ‘bama……..

Isn’t Southern Miss playing one of the other Mississippi schools kind of significant? Used to be an annual thing but it seems they stopped playing years ago.

Yes playing Miss. State is very significant. It would be great if USM could bring back the 2011 team that went 12-2 to play the game.

Ole Miss and Miss St have no upside to playing USM,, the same as UF playing any florida school other than FSU

Southern Miss should have scheduled UConn to open next season, then one of them would have ended their miserable losing streaks. Perhaps that could still be set up, with the requirement that the loser give up football for the remainder of the season and put all of their efforts in disaster work.

So it looks like they’ll finally win a game vs Alcorn St. But will they lose to all FBS teams they play is the question.

Southern Miss is Southern which Miss to win a football game.

Here’s hoping that in 2015, ECU and USM can continue their long-standing rivalry.