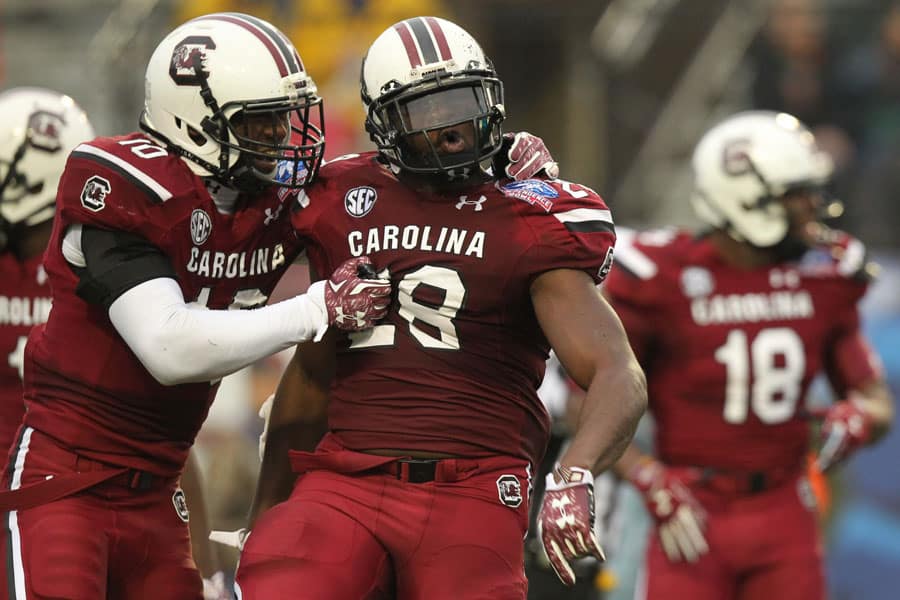 The South Carolina Gamecocks and the Appalachian State Mountaineers have scheduled a three-game football series for 2019, 2025, and 2027, both schools announced on Thursday.

In the first game of the series, South Carolina will host Appalachian State at Williams-Brice Stadium in Columbia on Nov. 9, 2019. The Gamecocks will then travel to face the Mountaineers at Kidd Brewer Stadium in Boone, North Carolina on Sept. 20, 2025.

The third and final game of the series will be played in Columbia on a date to be determined during the 2027 season.

South Carolina and Appalachian State have met nine times on the gridiron, but not since a 35-9 Gamecock victory in 1988. South Carolina has won five straight meetings and holds an 8-1 advantage in the series.

The addition of App State completes South Carolina’s non-conference schedule in 2019. The Gamecocks are slated to open the 2019 season vs. North Carolina (in Charlotte) and later host Charleston Southern (Nov. 23) and Clemson (Nov. 30)

“This is an exciting announcement for Appalachian State Athletics, and I want to thank Ray Tanner and the South Carolina administration for working with us to make this series a reality,” App State Director of Athletics Doug Gillin said. “Being able to visit a great venue in Williams-Brice Stadium and hosting South Carolina at The Rock for the first time is a great opportunity for our fans and supporters. Adding a multi-game series against one of the country’s finest baseball programs is another great opportunity for our student-athletes and university.”

The Mountaineers have also completed their non-conference schedule in 2019. App State is set to open the season at home vs. ETSU (Aug. 31) and later hosts Charlotte (Sept. 7) and plays at North Carolina (Sept. 21) before traveling to Columbia.

Doug Gillin is doing such a great job at App that I fear a P5 program is going to snatch him up.

This is a good match up. I like how both schools schedule. Appy is trying to hit home runs with these 2 for 3 games. Miami has come to Boone.
South Carolina usually schedules a directional Carolina school and/or a NC State or North Carolina + the Clemson game. This is how college football scheduling should be.

App State, Good luck on getting SC to actually follow through with that game in Boone. Can’t even recall how many years they’ve put off or canceled their trips to ECU.