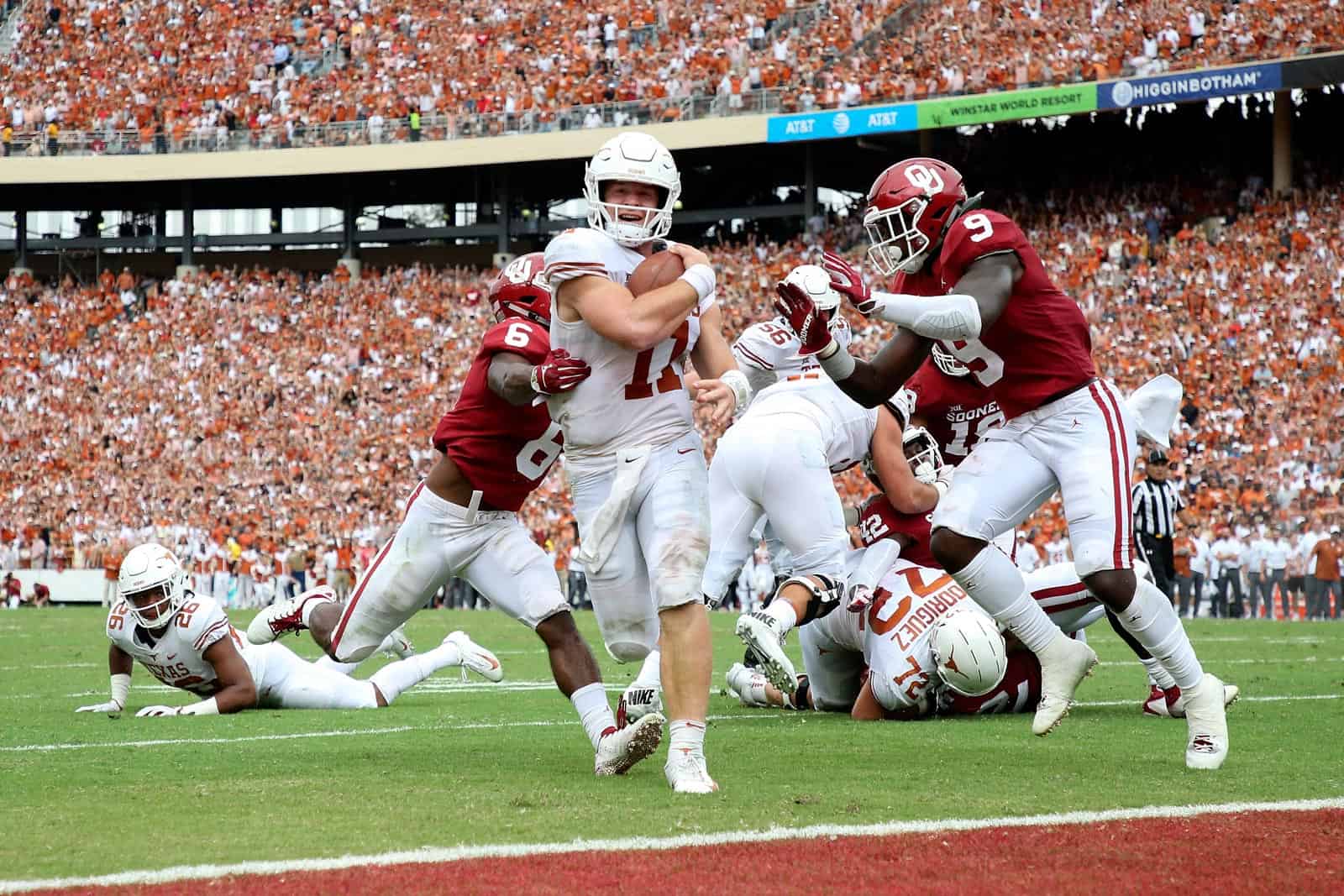 Texas and Oklahoma have contacted the SEC to express interest in joining the league, sources with knowledge of the situation reported to Stadium Wednesday.

The league’s media grant of rights expires in 2025 and neither school is reportedly interested in renewing that grant.

Early next week, the @TexasLonghorns and @UofOklahoma will send a letter to the @Big12Conference stating that neither school will renew their media contracts when they expire in 2025.

“I felt all along this was inevitable,” a source within the Big 12 stated in the report. “Texas and Oklahoma were never willing to talk about extending our grant of rights early. Our league has always depended on Texas and Oklahoma — for a lot of good reasons and a lot of bad reasons.

“Texas has always had a wandering eye for a while and been tough to deal with. It’s hard to keep them happy or satisfied. OU has no choice but to join Texas. At the end of the day, this is all about survival. When the music stops, how many chairs are left?”

“We want to be the only SEC team from the state of Texas,” Bjork said, as reported by SI‘s Ross Dellenger.

“There’s a reason why Texas A&M left the Big 12 – to be stand alone & have our own identity. That’s our feeling,” he added.

Expansion would require an affirmative vote from 11 of the 14 league member institutions — or, with A&M likely out of the picture, 10 of 13. This would clearly not be an immediate change, as SEC Commissioner Greg Sankey reiterated in remarks Wednesday.

“We are only worried about the 2021 season,” Sankey said.

Both schools initially denied the reports.

“The college athletics landscape is shifting constantly. We don’t address every anonymous rumor,” commented Oklahoma. For Texas’ part, it said:  “Speculation swirls around collegiate athletics. We will not address rumors or speculation.”

Those comments were seemingly refuted in a report late Wednesday.

SOURCES: After notifying the @Big12Conference early next week, @TexasLonghorns and @UofOklahoma will petition the @SEC for membership.

More information will be released as it becomes available.

If this is true, you will see a snowball effect across the country. The SEC will go to a 9 game conference schedule. Texas and Oklahoma to the west, Alabama and Auburn to the east and Missouri to the west. Everyone plays their division foes and 2 crossover teams. No more permanent rival because the only ones that wanted them will be in the same division now. The crossover teams will be rotated by two every year. Everyone will play each other in a 4 year rotation. This has to do with the monster deal the SEC has with ESPN that goes into effect in a couple of years. The reason I think this is probably 95 % true is that most of teams future opponents only have 2 or 3 opponents scheduled, which opens up the 9 game conference schedule. There is talk about cutting a game off the season. Not going to happen. Way too much money involved. The hold up on the 12 team playoff is the kids will be playing a NFL schedule. NLI is a piece of that problem. The kids will now want compensation.

I see 3 scenarios out of this.

Pac-16 (Goes with pods of 4 you play your pod every year but the pods rotate, creating new divisions every year, 9 conference games each school plays at least one school in each pod every year)

This would bring back some rivalries Texas-Texas A&M Pitt-West Virginia the 4 North Carolina schools would play yearly. Other than Kansas St. probably joining the American, nothing really happens to the group of 5.

Would the ACC even give West Virginia a look? West Virginia isn’t even on par with Louisville academically and doesn’t offer much in terms of a media market (officially in the Pittsburgh DMA, but I’m not sure how much influence WVU has outside its sparsely populated state).

First of all, to paraphrase Dylan Thomas, Texas A&M is “not go[ing] gentle into” a Longhorn-ful SEC.

In addition, Notre Dame is not going to join any conference until their inclusion any type of national playoff system becomes prohibited. (Clearly now highly unlikely with a 12-team, six at-large berth playoff).

However, if somehow the Texas/Oklahoma secession were to occur, it would be more likely Kansas and Missouri moved to the Big 10; the SEC replaces Missouri with either NC State or Virginia Tech and; the ACC replaces their lost member with West Virginia. As for the remaining, now homeless 6 schools… it would be most conceivable they would combine with the PAC 12 and form some type of 2-division surfer/cowboy conference.

The B1G brings in $50+ million per school. The Big 12 remainders are not worth that type of money. If they were, Texas and Oklahoma wouldn’t be leaving.

this was really impressive

If this happens (and it looks like it will), there will be significant effects on the other conferences. What happens to the remaining 6 schools which are current Big 12 members? What effect will this have on the ACC? The Big 10? The PAC 12? It’s hard to predict, but I don’t think this will be a positive for those other conferences and schools.

This would be huge! The SEC would be even more powerful and Big 12 would be hurt and probably raid the AAC and or Mountain West for members.

A&M will likely block Texas, plus Oklahoma politicians will do whatever it takes to get Oklahoma State to join the SEC with the Sooners

OU/Texas need 10 teams to vote yes for them to be accepted. Texas A&M will definitely say no but will anyone else?

I think they’d get voted in.

I believe Arkansas and Missouri both remember their uncomfortable coexistences in the SWC and Big 12 respectively with Texas.

Mostly here for the comments, but I’ll say one thing.

Nope—–they don’t want the schools that have the second name.

John – That is true, however I think the real question is, do the governors of Texas and Oklahoma want to allow that?

WHY would Oklahoma want to bury itself under Alabama in the SEC or under Ohio State in the even more powerful B1G ??? They need to look at Georgia or TTUN situation.

The SEC would more likely buy Vanderbilt out and pick up West Virginia or Ok State. Vanderbilt would fit better now in the ACC and be Tennessee’s season ending ACC-SEC game.

Vanderbilt is a charter member of the Southeastern Conference, which means they’re not going anywhere and no other school in the SEC will dare bully the Commodores to leave the conference.

American adds a C-USA Texas school or two and/or FAU and/or FIU. C-USA then might add Liberty, UMass, UConn, or and FCS school(s).

Texas and/or Oklahoma go independent. Like Notre Dame I feel like they would get enough Power-5 teams willing to play them that if they go 11-1 or 12-0 would be in the playoff.

Spencer I don’t agree about what you said about Notre Dame being ok with being able to get into a 12-team playoff as an independent. Yes they’ll get in but why would they want to play an extra game to win the National Championship? At the end of 2012, 2018, and 2020 they were one of the 4 best teams in the country which is who the byes should go to. I think Notre Dame knew something was rumbling with Texas and the SEC months ago and agreed to the playoff set-up because they know by the end of the decade they’ll be in the ACC.

Agreeing to an expanding the access to the national championship playoff, and of course getting to keep ALL the money and not sharing it with any conference; I believe provides more than enough motivation to for them to remain an independent. However, if playoff regulations were to mandate a conference membership, they would most likely ask the Big 10 to waive their mandate of AAU membership and join the Big 10.

All this is, is a money grab. Neither team has been to the CFP Championship, and haven’t played in a Championship game since Texas did in 2009. There is now way, there is going to be a 12 team playoff. Now you are asking these kids to play up to 16 or 17 games? I don’t think so. Oklahoma and Texas are taking the money and running with it. They will not be relevant in the SEC.

After the way Big10 made concessions to Ohio State and snubbed Nebraska during COVID 2020, I could see Nebraska wanting to find a new home too.

They could jump to PAC-12 or, if the bridge isn’t completely burned, the Big12. Without Texas/OU there, they might like the idea of being there, if allowed.

Pac12 would pair them with Colorado, which I know Colorado would like.

The money Nebraska would lose by moving out of the Big Ten, without a financial equal landing spot, would sound their athletic department’s death knell. Plus, without AAU membership, West Virginia is not qualified for the B1G.

If TEXAS and Oklahoma join in the SEC. The Divisions will be East and West. on the East- Florida, Georgia, Kentucky, Vanderbilt, Missouri, Arkansas, South Carolina, and New comers Oklahoma. on the West is Alabama, Auburn, Mississippi, Mississippi State, Texas [email protected], Tennessee, Louisiana, and new comer Texas.

Here is the Yearly games means they will play Avery year. Here the games, Florida vs Louisiana, Georgia vs Auburn, Kentucky vs Mississippi State, Vanderbilt vs Tennessee, Missouri vs Texas [email protected], Arkanas vs Alabama, south Carolina vs Mississippi, and red river riverly Oklahoma vs Texas

This is just a money grab for Texas and Oklahoma, who have not been relevant since the 2000’s (2000-2009). They will have good seasons 8 or 9 wins, but will not compete for a National Championship. if there is a 12 team playoff being discussed, then what year is it supposed to start? You are asking young players to play is 16 games? I do not think they will expand. Four is just fine.