Slive: “Strength and depth of SEC” a Factor in Eight-Game Schedule 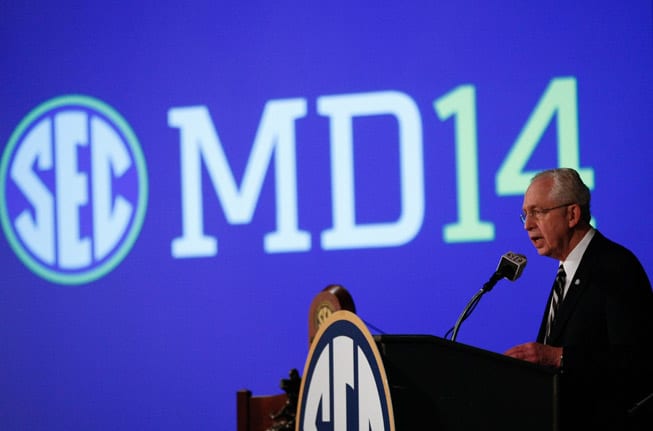 Back in April, the SEC announced that they were keeping their eight-game, 6-1-1 format football schedule for the 2016 season and beyond.

In a press release, SEC Commissioner Mike Slive noted that the “concept of strength of schedule is based on an entire 12-game schedule” and that teams in their conference will “boast of a strong resume’ of opponents each and every year.”

At the start of the 2014 SEC Football Media Days today in Hoover, Alabama, Slive again pointed to the strength of the SEC as the primary reason for keeping eight games rather than expanding to nine.

“As you know, we spent a great deal of time this past year reviewing the conference’s football scheduling format. In May we announced we will continue with the current eight‑game conference schedule,” Slive said. “The strength and depth of the SEC was certainly a determining factor in this decision since the concept of strength of schedule is based on the entire 12‑game schedule.”

The entire 12-game schedule is what will be looked at by the College Football Playoff Selection Committee, as executive director Bill Hancock stated recently.

Since the SEC is touting their strength from top to bottom and keeping the eight-game format, it’s imperative that their teams also play a tough non-conference schedule.

To that end, the SEC also mandated that beginning with the 2016 season, all conference members must play at least one non-conference game against a member from a Power Five conference or Notre Dame.

But it has influenced schools to reach out and grab even more tough opponents when possible. In just over two months since the mandate was issued, SEC teams have scheduled the following games:

Several other great matchups have been rumored, including Alabama-USC, LSU-Miami (FL), and Texas A&M-Texas Tech.

Slive mentioned some of those matchups today, although some were scheduled before the strength of schedule mandate was announced.

I’ve no problem with the SEC keeping their 8 game conference schedule, but they must realize if you schedule 4 cupcakes and miss out on the best teams in the in the opposite division of the SEC, the committee will take that into account. You may get left out if you draw Kentucky & Vandy and schedule 1 FCS teams and 3 “monsters” of the Sun Belt.

In other words, the P5 mandate is a PR move. Vandy, Mississippi St. and Missouri are really the only schools that needed to beef up their OOC schedules to comply with the P5 mandate. (Georgia already plays P5 Georgia Tech every year).

Florida has Florida State, Kentucky has Louisville, Georgia has Georgia Tech, South Carolina has Clemson – I’m not bashing these teams but how much credit do you give them if they play their annual rival and then schedule 3 horrible other teams – all at home? A team like Florida hasn’t played a non-conference game outside the state of Florida in… how many years? I just think if you’re playing 8 conference games (some will be challenging, some won’t) there should be a bigger onus on them to schedule more than just a rival or a bottom feeder from a P5 conference.

Florida hasn’t playred a nc road game since 1992 at Syracuse. Google the score. There is no room for cowards in the world bit in college football there is.

Let’s the hope the Power 5 opp’s aren’t going to be B.C., Purdue, Syracuse,Kansas and other cellar dwellers just to fulfill their obligation. Hopefully we get quality P5 opponents!

The notion that the annual rivals you list for the SEC teams are actual good OOC is overblown by people. Gtech is bottom 1/2 program in the ACC that has 1 good year every 10. Louisville was garbage for all but the last 4 years or so, Clemson is a mediocre program over the decades of history, the only A #1 OOC annual is FSU.

Btw, the SEC plays the least OOC vs other major conferences and again leads with the most teams that play no games OOC vs major conferences. Not having 9 games with 14 teams is nothing but stupidity. It means you play 6 teams in your conferences twice in 12 years while you play northwest bumpkin state more times.

and Missouri stepped up to the challege by scheduling a HAH with Purdue.