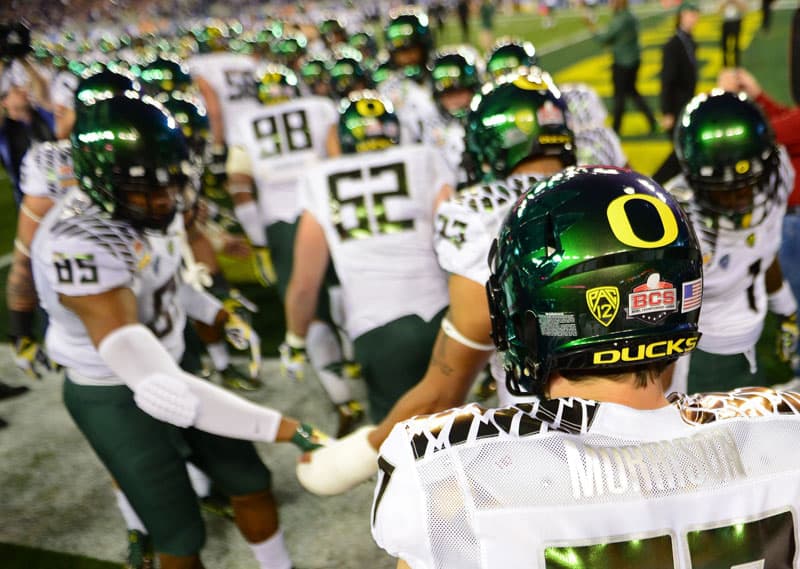 Though the preseason polls aren’t all-knowing, they do give insight into which Saturdays we should plan on being firmly planted in front of a high-definition television.

Of the Top 10 teams listed in last year’s AP preseason poll, only two—Florida and Georgia—finished the season ranked out of the Top 20. Four of these squads—Alabama, Oregon, South Carolina and Clemson—all finished where they started, in the Top 10.

So while the early voters aren’t entirely accurate, they aren’t as far off the mark as we’re sometimes led to believe.

Here’s a look at the six blockbuster Top 10 matchups in 2014—listed in chronological order—according to the preseason AP poll. Even if these teams trickle down the rankings, these are the games that will be the headliners this season—clashes you need to plan on not missing.

Based on the AP rankings, this is the biggest early-season, non-conference game of 2014. The Ducks will host the Spartans after playing FCS South Dakota at Autzen in the season opener, while Michigan State will have kicked off the season at home against FCS Jacksonville State.

In what might be a preview of the Pac-12 title game, in Week 7 the Ducks will travel to L.A. to face their second preseason Top Ten ranked foe of 2014.

Oregon follows its Week 2 clash with No. 8 Michigan State with a home game vs. Wyoming, a road trip to Washington State, a bye week and a home game with Arizona. UCLA, on the other hand, will have opened at Virginia, played Memphis at home, faced Texas in Arlington, taken a week off, traveled to Arizona State and hosted Utah.

Both teams have an excellent opportunity to be at one-loss or better by the time this game rolls around.

What will be interesting about this one is watching UCLA’s No. 72-ranked rush defense from last season try and contain Oregon’s No. 9 ranked rushing attack. The matchup looks even more intriguing given that the Bruins return eight starters on defense this season while the Ducks bring back their top three rushers and all but one starting member from their O-line (they lost left tackle Tyler Johnstone to an ACL injury).

When: Saturday, Oct. 25
Where: Jordan-Hare Stadium, Auburn, Ala.

By the time South Carolina travels to Auburn in Week 9, the Gamecocks will have already faced three preseason Top 25 teams (No. 21 Texas A&M, No. 12 Georgia and No. 24 Missouri) while the Tigers will have faced two (No. 20 K-State and No. 13 LSU).

If both teams are as good as they look on paper, they’ll have taken care of business up until this point making this a realistic preview of the SEC title game.

Even though South Carolina finished last season with the No. 12 scoring defense in college football, it ranked No. 51 vs. the run, giving up 153 yards per game. The Gamecocks will need everything they’ve got on that side of the ball to try and keep up with Auburn’s No. 1-ranked rushing offense from last season.

While the Tigers did bid farewell to its top rusher Tre Mason, it welcomes back three members of its stellar offensive line and the three rushers behind Mason—quarterback Nick Marshall and running backs Corey Grant and Cameron Artis-Payne who combined for 2,325 ground yards in 2013.

No. 5 Ohio State at No. 8 Michigan State

While on one hand you’ve got to wonder—with the loss of starting quarterback Braxton Miller to a shoulder injury—if Ohio State will even still be ranked by November, remember that for now Michigan State is the only Top 25 opponent on the Buckeyes’ entire schedule.

So, while they’ll have to play the eight games prior to this one with a young team and a rookie quarterback, they won’t necessarily be facing a Murder’s Row of opponents.

The bottom line is that both these successful programs are short on experience in 2014: Ohio State ranks No. 87 in the FBS in returning starters this season, while Michigan State comes in at No. 100. That said, by Week 11 both squads—which have also recruited well—should be settled in and playing the best football they can.

Keep in mind that both Ohio State and Michigan State are in the new Big Ten East division, so while this won’t be a preview of the conference championship game, it may decide which team gets to go.

Though Baylor’s offense had a lot to do with it capturing its first conference title in almost 20 years, its improvements on defense are what put it over the top.

Speeding forward to this season, and their game with Big 12 powerhouse Oklahoma, the Bears return a mere four starters to their solid defense from a year ago. Add in that the Sooners are a maturing offense, not one that is starting over, and you get the picture.

Keep in mind that Baylor has only beaten Oklahoma twice in 23 tries (the Bears won in 2011 and 2013) and has never won in Norman.

When: Saturday, Nov. 29
Where: Bryant-Denny Stadium, Tuscaloosa, Ala.

Being that this is the final regular season game for both these teams, anything could happen between now and Saturday, Nov. 29.

If both teams have run the gauntlet successfully, this game will, as it did last season, decide which team moves on to the SEC title game and the first-ever College Football Playoff.

Remember that though Auburn beat Alabama in Tuscaloosa in 2010, its other two visits to Bryant-Denny since 2008 resulted in a combined 85-0 shutout at the hands of the Crimson Tide.

Preseason polls are garbage. I bet last year you would have FSU vs Florida on your list. Florida while preseason top 10 went 4-8.

Did you miss the part where he said, “Of the Top 10 teams listed in last year’s AP preseason poll, only two—Florida and Georgia—finished the season ranked out of the Top 20”?

So, interpreted another way, of the teams thought the be top 10 last year, 8 of them were at least top 20 by year’s end.

He’s not showing us all top 25 match ups, just top 10. You have an 80% chance by year’s end that all these teams will be top 20. They’ve got a good list of football up there.

If 80% is garbage to you, send me your garbage.

Seems like most people don’t read the copy any more. Instead, they just look at the list of games or rankings.

You might as well say they`re 100% right if you count all the way down to the top 100 teams. And their preseason ranking helps determine their final ranking throwing off any suggestion that they pick the correct teams. Also what percentage of the top ten teams ended as a top ten team? Garbage.

First of all, you misread the article. Second, please stop adding negative comments to every article with polls or SOS. We get your POV by now.

I see where someonereasonable is coming from, all this preseason stuff is so subjective, it’s mostly opinion. Even the late season rankings are that way. It does get old to see so many articles discussing these often biased opinions!we call rankings, this website is certainly not the only offender of doing this.

the only thing better than football is more football, and the female reproductive organ, but thats it, thats the list, i love polls, big long polls are my favorite :D

I was about to ask where LSU-Alabama is, but LSU isn’t quite Top 10 this preseason.

Hey I’ve been a HUGE fan of this site, you guys do such a wonderful job. I’d like to share my own work related to college football scheduling (which I rely on this site for a lot of that great information).