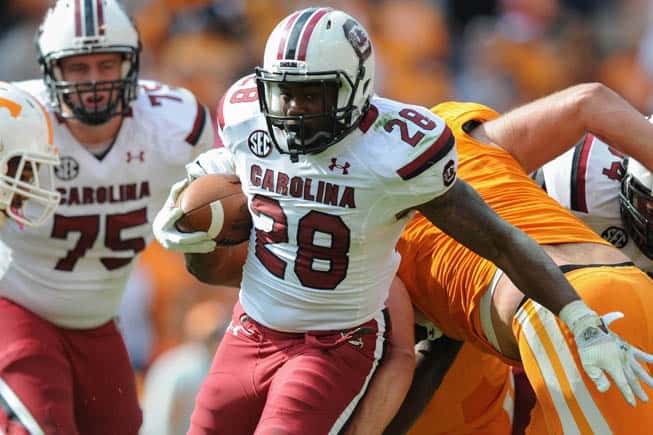 If you’ve ever felt like you’ve “been there” and “done that” this is for you—six college games between teams who have never faced each other on the football field.

All are powerhouse programs and all mark first-time matchups, quite something for a sport which has been alive and well since Rutgers and Princeton got things underway in 1869.

Though this list doesn’t include all the first-ever meetings in 2014—especially with another wave of conference realignment this year—it’s a good start.

The first Thursday of 2014 will kick off with a blockbuster, first-ever meeting between Texas A&M and South Carolina, both tasked with starting their seasons with SEC games.

The Aggies have only visited the state of South Carolina twice to face an FBS opponent, in 1973 when they beat Clemson 30-15 and most recently in 2005 when the Tigers won 25-24.

The only power-five team from the state of Texas ever to play in Columbia is Baylor. The Bears beat the Gamecocks in South Carolina 24-13 in 1975.

It’s hard to believe that Notre Dame has missed playing anyone in its 127 years as an independent, but 2014 will mark its first-ever meeting with Louisville.

A cross-country clash which has never occurred before, Virginia and UCLA will kick off their respective 2014 campaigns with a first-ever meeting.

The Cavaliers are 0-4 all-time against Pac-12 members, most recently losing to Oregon 59-10 in Charlottesville last season.

The front end of an exciting home/away series, Virginia Tech and Ohio State’s Week 2 game in 2014 will mark their first-ever meeting in 247 years of combined football history.

The Hokies are 3-2 all-time against the Big Ten, most recently falling 23-20 to Michigan in the 2012 Sugar Bowl. The last time Virginia Tech traveled to the state of Ohio for an FBS game was in 1996 when it beat Akron 21-18.

The first part of Chick-fil-A’s two-game college football kickoff in Atlanta, Ole Miss and Boise State’s Week 1, Thursday night showdown will be their first ever.

The Rebels are 5-3 all-time against Mountain West members and last beat Fresno State 38-28 at Fresno in 2011.

The Broncos are 1-4 all-time against SEC members, most recently scoring a 35-21 win over Georgia in Atlanta in the 2011 Chick-fil-A Kickoff game.

Part two of the 2014 Chick-fil-A Kickoff, Alabama and West Virginia will open their respective seasons by squaring off for the first time in history.

It’s hard to believe that the Crimson Tide, who started playing football in 1892, and West Virginia, who hit the gridiron in 1891, have never faced each other.

Alabama is a surprising 7-14-2 all-time against Big 12 members and most recently lost 45-31 to Oklahoma in last season’s Sugar Bowl.

Wvu didn’t lose to lsu in morgantown, they beat them, I should know. I was there! Right int he middle of the lsu section! Whiney little brats!

Actually, yes they did. LSU beat them 47-21 in Morgantown. Maybe you’re thinking of Auburn.

That is wrong Brady Clarke? I am a big WVU fan, and I saw that game too, but LSU blew out WVU 47-21 in Morgantown in 2011, the previous year in 2010 in Baton Rouge, La the Tigers beat the Mountaineers 20-14. I hope WVU beats Alabama this year, and has a great season, also I would like to see Pitt and WVU renew the “Backyard Brawl” in the near future, and add a 10 year Home and Home series?

Alabama vs West Virginia: Alabama lost a lot of key players, but West Virginia is terrible. WVU ranked 100th in the nation in defense. I don’t see that improving anytime soon.

Ohio St vs VT: Ohio St lost experienced players on both sides of the ball. VT is still improving. The winner the this game goes to who leads in the 4th qt.

I believe you overlooked another gam: BYU plays UCONN for the first time this season.

This is not an all-inclusive list, as indicated in the first couple of paragraphs.

But Kevin, surely there’s room on your list for Florida vs. Idaho!

Idaho has never played Florida before either, they play August 30

Florida versus Idaho. Like 70-0 by the half. Stay in the locker room, Vandals, just stay inside.