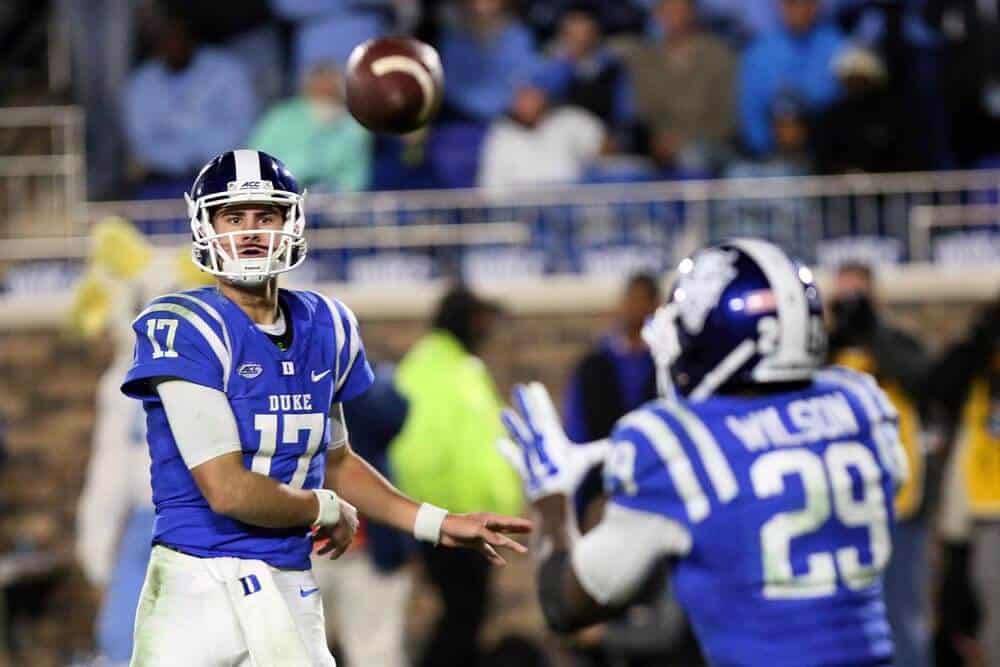 Last week we highlighted programs that benefited from “easier” schedules this past season, this week we look at the flip side.

The teams listed below were each saddled with a silent disadvantage – a slate that was significantly harder than what it faced in 2015. The results – in wins and losses – are no coincidence.

Ohio State’s increase in schedule strength ranked 15th in the FBS and second among Big Ten schools. Though the Buckeyes still managed to make the CFB Playoff last season – 11 wins is the fewest they’ve earned since going 6-7 in 2011. That was the “lost season” under Luke Fickell.

When analyzing Big Ten schedules from 2015 to 2016, it’s key to remember that the league went from eight to nine conference games over the same time period. The net effect was dropping one non-conference game and adding a cross-division opponent in its place.

Ohio State went from playing Virginia Tech, Hawaii, Northern Illinois, and Western Michigan in 2015 to (14) Oklahoma, Tulsa and Bowling Green in 2016. The main difference is the obvious upgrade from the Hokies to the Sooners.

From across the Big Ten in the West, the Buckeyes faced Minnesota and Illinois in 2015. This was seriously ramped up last season to (8) Wisconsin, Northwestern and (9) Nebraska.

Ole Miss’ first-ever losing season under Hugh Freeze coincided with the 14th biggest increase in schedule strength in the FBS. The 27-rank bump took it from the top 30 to the top 5.

The biggest change to the Rebels’ schedule from one year to the next was the total lack of a Power opponent out of SEC play in 2015 compared to facing a top 5 team in 2016. In 2015, Ole Miss squared off with FCS UT Martin, Fresno State, New Mexico State and Memphis. In 2016, it was (4) Florida State, FCS Wofford, Memphis, and Georgia Southern.

Though Akron’s 29-slot schedule strength increase from 91 to 120 may seem like splitting hairs, it amounts to a tie for the 10th biggest bump in the FBS. It also contributed to the Zips falling short of their quest to score back-to-back bowl bids for the first time in program history.

From a non-MAC standpoint, both seasons were brutal – Akron traveled to (19) Oklahoma in 2015 and to (10) Wisconsin in 2016. The real kicker came in the cross-division schedule – drawing Eastern Michigan and Central Michigan in 2015 vs. (24) Western Michigan and Toledo in 2016. It amounted to upgrading doable games against the bottom half of the MAC West to up-hill battles vs. the heavy hitters.

Marshall’s three-year run of pumping out double-digit wins came to a miserable halt in 2016, its worst performance since 2007. The coinciding increase in schedule strength was tied for the seventh biggest in the FBS and first among C-USA schools.

The biggest difference for the Thundering Herd was in non-conference play. In 2015, they played Purdue, Ohio, Norfolk State, and Kent State. In 2016, they squared off with Morgan State, Akron, (3) Louisville, and Pitt. In other words, they replaced a struggling Big Ten opponent with a national championship contender and a MAC foe with a bowl- eligible team from the ACC.

Duke snapped its unprecedented four-year bowl run by posting a 4-8 record in 2016, its lowest mark since 2011. The 39-slot increase in schedule strength, which took the Blue Devil’s slate from the bottom half of the FBS to the top 25, ranked sixth nationally.

The bump comes down to two key changes. First, Duke played three of the four same non-conference teams during both seasons – North Carolina Central, Northwestern, and Army. In 2015 the unique opponent was Tulane, in 2016 that got upgraded to Notre Dame.

In ACC play, the Blue Devils drew Boston College and Wake Forest in cross-division action in 2015 vs. (7) Louisville and Wake in 2016.

Though the Midshipmen only dropped two wins last season vs. 2015, it cost them an opportunity to post back-to-back, double-digit wins for the first time in program history. The coinciding 43-point jump in schedule strength ranked fifth among FBS teams and first in the American conference.

The truth is, Navy’s schedule doesn’t change much from year to year. They face the same trio of non-league opponents (Notre Dame, Air Force and Army), rotating only the FCS foe. In American action, they played all the same opponents in 2015 as they did in 2016. Despite that, one contributing difference was Houston – a Top Ten team last season (No. 6 at game time) vs. a Top 25 opponent the year prior (No. 21).

It’s not so much who Navy played last season, it’s where they played them. First, it got Notre Dame in Jacksonville, Fla. The way the series with the Irish works is the two meet in South Bend every other year and then at a neutral site in between. Though they’ve met in the state of Maryland four out of the last seven times, it’s the first time they’ve clashed down south in the Sunshine State since 2000. The two have never met in Annapolis.

The Midshipmen also traveled to Air Force in 2016, where they are 7-16 all-time compared to 10-8 at home. From across the conference in the East, they visited South Florida and East Carolina this past season as opposed to hosting them in 2015.

Kind of a silly article. Ohio State and Ole Miss played tough schedule in both years and Akron, Marshall, and Navy played weak schedules in both years. Don’t know where this piece is trying to go, but thanks for the attempt.

UMass had a heck of a schedule, perhaps they should have been included.

They’re a special case, because they switched from MAC to independent. Conference shifts aren’t really the point of this article.

Pre-season rankings are absolutely worthless. Rankings should not come out until week 6 at the very minimum. They only serve as talking points for Colin CowTurd, et. al and hyping a battle of top tens in late September when #8 “Dick State” has beaten three Sun Belt Teams and #10 “Swinging Richard U” has a FBS scalp, a lower-tier MAC school victory and maybe beat Rutgers or Vandy………