Should Florida and Idaho Resume Their Football Game? 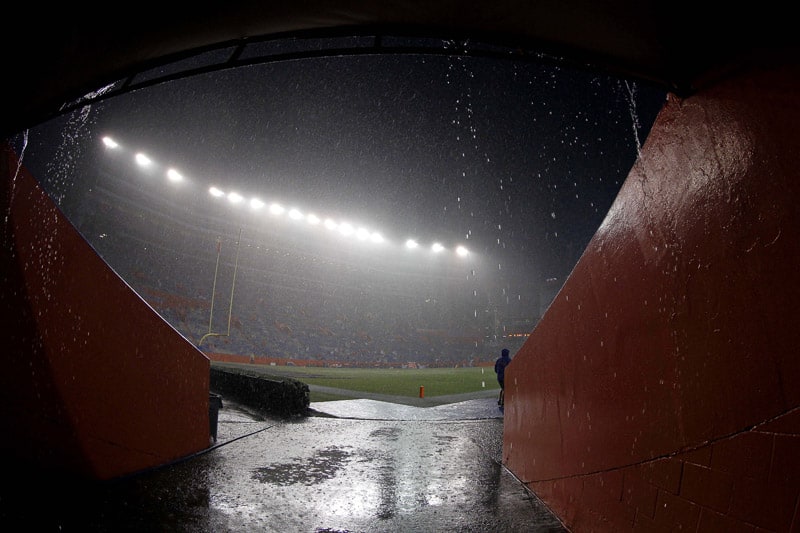 Florida-Idaho was suspended due to weather in Gainesville. (Kim Klement-USA TODAY Sports)

Update (9/2/14): Florida has released a statement as to why the game was not able to be played on Sunday.

Note: Neither school has announced its intentions of finishing or canceling the game, and are not expected to for a few more days.

If you didn’t already know, the Idaho at Florida football game was suspended on Saturday night after only one play – a huge one for the Gators — was squeezed in between the downpour of rain and lightning filling the dark Gainesville skies.

After a roughly three-hour weather delay, the Vandals kicked the ball to the Gators to begin the game, only to see it returned by Valdez Showers (fitting last name) to the Idaho 14 yard-line. Quickly after that, game officials ushered both teams back into the locker rooms and ended up suspending the game.

Both teams share a mutual bye week of Oct. 25. However, the bye week is well-needed time off for the Gators as they are set to face the Georgia Bulldogs the following weekend in Jacksonville, Fla.

Why the two should resume the game

To play a 12 game schedule.

That’s the main reason why the two schools would want to resume this game. Of course, there are a couple of secondary reasons.

The game is likely to be a relatively easy win for the Gators, pending they can stay focused – and healthy – this season as the game wouldn’t be resumed until late October.

The Vandals will probably want to resume the game because, as of now, they won’t get the full $975,000 check they were expecting to receive for playing the Gators. Sure, Idaho isn’t like some of the other FBS teams where that paycheck will fund the football program for the whole season, but it’s still nice to have.

Why the two shouldn’t resume the game

Idaho would also suffer additional travel costs for the second trip, unless a new deal is negotiated for reimbursement.

The Gators can’t really afford to sacrifice the bye week because they play a neutral site game against Georgia the following week (Nov. 1). The Bulldogs have bested the Gators for the last three years, a streak that started when Will Muschamp took charge of the Gators.

And, to make matters worse for the Gator representatives who will gather to weigh the options in the coming days, they must keep in mind that Georgia will come in to the game hungry for victory — and well-rested. The Bulldogs have a bye the week prior to facing Florida.

Should have played today, Sunday 8-31-14 while everyone is still there. Getting Idaho U. and fans to reschedule a flight back would be the biggest problem. Better than coming back later.

Totally agree. They should have played on Sunday

SINCE when do we have ties in COLLEGE football

Can someone tell me why they could not play the game today? I am sure that the SEC Network would have liked an afternoon game.

How many Idaho fans actually made the trip from Idaho? Typically a lot of the visiting crowd is made of people who transplanted to a new part of the country. Play the game. had the storm been announced in advance and Idaho had not made the trip, this would be a no-brainer. While this was not a hurricane, this is the kind of risk a team takes when they schedule a game in hurricane country.

That’s kinda a dumb statement.hurricane season has nothing to do with the game being cancelled. That’s like saying don’t schedule a game in Califronia, because there could be a earthquake! Really! It rains a lot in summertime in Florida!!! They should’ve played the game today!!

It is dumb to think a venue can provide the necessary security, police, concessions and field maintenance on less than 12 hour notice to the people who would be required to work the game. Have you ever been to G-Ville on game day? Most fans drive 2 to 4 hours each way from the Jax, Orlando and Tampa areas. Would you expect them to drive home at 11 pm and have them turn around and drive back the next day? All the hotels rooms in town are already sold out for game weekend. The Idaho football team spent Friday night on Ocala, close to an hour away. they had checked out of their hotel before the scheduled game. Where would they stay. Could they arrange to push their chartered flight back 1 day to stay over and play Sunday? Moving the date of a football game is a logistical nightmare. I don’t remember a game being cancelled before because of a simple heavy rain. That’s why I mentioned hurricanes. Those are the only reasons (besides a Colorado forest fire) that I can think of that led to cancellations.

Agreed. It would definitely be a nightmare. I have a feeling this game isn’t gonna get played. Unless UF pays Idaho’s travel expenses. I don’t believe they want to play on there bye week before the Georgia game.

Why doesn’t Florida go to Idaho on October 25? They have all the money to make that type of travel. They could also schedule a neutral site game like in Texas or something that’s half way between Idaho and Florifa.

because the Kibble Dome only seats about 13,000 people and Idaho seldom fills that. Also because most people in Texas are more concerned about the Cowboys and Aggies and Longhorns and Baylor Bears to pay good money to watch a blowout between two teams without a local connection.

Both are terrible solutions. This situation happened last year with Fresno State vs. Colorado, and Colorado just scheduled an FCS school during an off week whereas Fresno went with an 11-game season.

What they actually should do is reschedule their Eastern Kentucky game to September 27, when EKU and UF have a bye, and play their Idaho game on November 22, when Idaho has a bye. Idaho plays @ App State on Nov. 29, so it won’t be a big expense to travel down to UF then.

Just play it at the end of the season if Florida doesn’t make it to the SEC title game.

That’s exactly what happened when Oregon State/Nicholls State was ppd a couple years ago when NSU couldn’t get out of LA due to Isaac (and I’m also pretty sure years back Missouri made up their game with Michigan State on the Sat of the Big XII title game).

Hell, thanks to Idaho’s braindead decision to go back to the Sun Belt, instead of dropping back to FCS (Big Sky) where they belong, it wouldn’t be any different than a conference trip to GSU or Ga Southern anyway.

Will the NCAA grant a 5-6 Florida team a bowl waiver if necessary? What if they are 6-6 with two FCS wins?

It won’t be necessary because there are so many bowls now, that they would probably have to let some 5-6 (or even better, 5-7) teams play in bowls.

They should probably just play on December 6 if Florida doesn’t make the SEC title game, and if UF does make it (which is unlikely) the game will be cancelled. The earliest they could reschedule this game in future years is September 16, 2017.

I find it incomprehensible that the game was resumed the next day (Sunday) at 1 PM, EDT. Finish it up and be done. What in the heavens were the reasons for not moving the game to Sunday? This seems exceptionally odd.

Stupid they didn’t finish this game on Sunday. They both have an open date on 10/25, play it then! Every team should finish with 12 regular season games so it’s a no brainer to me. If they don’t, I hope they get punished by the committee for not making an effort to play it (if they have a chance of making the playoff)

Who cares about needing a bye week before the UGA game? This is IDAHO! Flippin Idaho! LOL!

they should play the game during the bye week or play the game during bowl season since neither of these crummy programs will be going bowling, which is saying something considering there will be 40 bowl games and 80 bowl teams, or since the ncaa has no power over the power 5, no pun intended, florida should just play ohio as their bowl game in hawaii, since that is roughly half way between the two schools, or florida should be given a loose for scheduling these on their calendar, either way you see my point, play the game or else

The administrators involved here really screwed the pooch on this one. This has happened in the past and the teams have either a) made the game up on Sunday, i.e., Howard @ Eastern Michigan in 2011, or b) played on the first weekend of December, if neither team is participating in a postseason game, i.e., Nicholls St @ Oregon St in 2012. It’s not that hard, guys. Figure it out. Both teams need this game. Florida needs the win for bowl eligibility purposes (and they’ll need every win they can get), and Idaho needs the 900k-plus bag of gold.