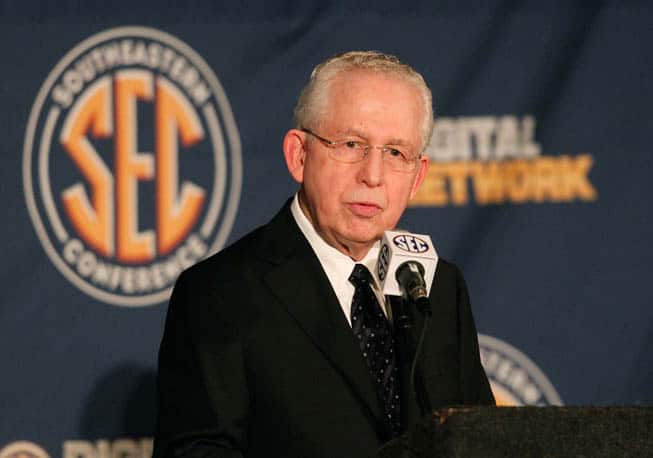 The 2013 SEC Media Days kicked off today, and commissioner Mike Slive spoke briefly about the status of their future football scheduling discussions.

“For those of you who were with us in Destin this past spring, you’ll recall we spent a lot of time talking about football scheduling. The end result was a decision to commit the conference to a review of our scheduling format in anticipation of the 2016 season. This review will include whether or not to play an eight- or nine-game conference schedule and whether or not to retain permanent non-divisional opponents.

“In the meantime, until that review is complete, we will continue to schedule based on the current 6-1-1 format pending the results of that review.

“As I said this spring, the simple goal of this review, although it is not simple to do, is to select the format that is in the long-term best interest of the conference as a whole.”

At the SEC Spring meetings in Destin, Florida in May, Slive said that the conference would play an 8-game, 6-1-1 football schedule in 2014 and 2015.

“We’ll leave here with that format, but I think there’s going to be a lot of discussion at all levels about whether that format should continue indefinitely.”

But some schools, such as LSU, prefer not to keep their permanent rival (Florida) in the issue of fairness. Ditching the permanent rivals would also allow teams to cycle through opposite division games more frequently.

In addition, a nine-game conference schedule would also have cross-division games occurring more frequently. It would also possibly allow the permanent rivalries to remain intact.

Both the nine-game schedule and permanent rival issues are being reviewed in preparation for the SEC Network, which launches in August 2014, and the new College Football Playoff after the conclusion of the 2014 regular-season.

The long awaited and much anticipated 2014 SEC Football Schedule is still not out yet and it doesn’t appear that it will be released this week at Media Days.

2014 SEC football schedule not ready for release this week.

Larry Templeton told me the SEC is "close" to getting the 2014 football schedule finished, but it won't be this week.

In June, Cecil Hurt reported that Alabama would play Florida in 2014. That game would likely be played in Tuscaloosa. Then in 2015, the Crimson Tide would play Georgia.

Also last month, LSU athletic director Joe Alleva told The Advocate that the Tigers will not play Georgia or South Carolina in 2014.

A 9-game conference football schedule in the SEC? It will never happen. It’s best that the SEC leaves it at eight…permanently.

umm, yeah, what? it’s best that a team in the SEC only plays a team from the other divisions twice in twelve years? so they only travel to that teams site once and host them once in a 12 year span? that is what’s best? not really.

I know you’ll say “well it’ll be better for the SEC to have less losses so less conference games makes their schedules easier” how about us fans around the nation quit with that mentality? tougher schedules and more conference foes playing each other means we find out a little more of how good a team is. why would you want the easy way out? if you lose more games because of this, you find out you don’t belong, and it helps you find out how deserving a team is. playing more conference games (with more teams) helps us find out the better teams in the conference cause they play more of them.

I would much rather play a challenging schedule, lose a few games, and realize that I don’t belong with the elite instead of using excuses to make my schedule easier helping me achieve a better looking record. when in reality you might not be as good as that record states.

teams need to challenge themselves even more. plain and simple. the SEC is the best conference, and 8 games IS a tough slate. but 9 is even tougher and helps us have less controversy on knowing who the better teams are.

Agree, 9-game conference schedules are ruining college football and never made any sense.

Big 10, PAC 12 & Big 12 will all play a 9 game Conference Schedule in 2014, and should get selected to the College Football Playoffs over the weak scheduling SEC & ACC who will only have 8 Conference games, so I say toss them in with the Lower Conferences (MAC, American, SBC, C-USA & MWC) to fend for the final 4th spot? …and I say ULL beats out Alabami’ lol
;)

A nine-game schedule doesn’t necessarily make your schedule tougher. Depends on the strength of the teams you do play plus non-league games.

I have little doubt that the SEC will go to a 9 game conference schedule in 2016. It is all about an abundance and plenty of great programming for that new SEC TV Network. All those other conferences already being at 9 games and a committee soon to be formed to choose 4 teams for a Playoff. The SEC will not let some committee member off somewhere give the reason an SEC team was not chosen was an 8 game conference schedule.

As far as that permanent cross division rival game? Who knows? My guess however would be that it stays.

A 9 game conference schedule sounds perfect to me. 6 divisional games, 2nd rivalry for each team, and each team gets to play all conference teams over a 4 year span, which I think is wonderful for the players that play all 4 years for one of those teams.

For players, that looks great on their resume if they go for the NFL.

For fans, I think that makes the excitement of playing those teams, even better, since we will be able to know when the next rematch will be held.

For everyone, this would really help to determine which team should be in the playoffs as well, when you have multiple 1-loss teams, coming out of the conference. (very familiar).

(Personally) I think only teams with 13 games should be allow to be in the playoffs.
(That’s right) Independent teams and minor conference teams need to play a ranked 12-game team to get in the playoffs, like the true conference champions do it. (2012: Notre Dame .vs. Florida during Weeks 14-15 would have been nice to see.)

This is the answer to the SEC football Scedule – theroommateswitch.wordpress.com/