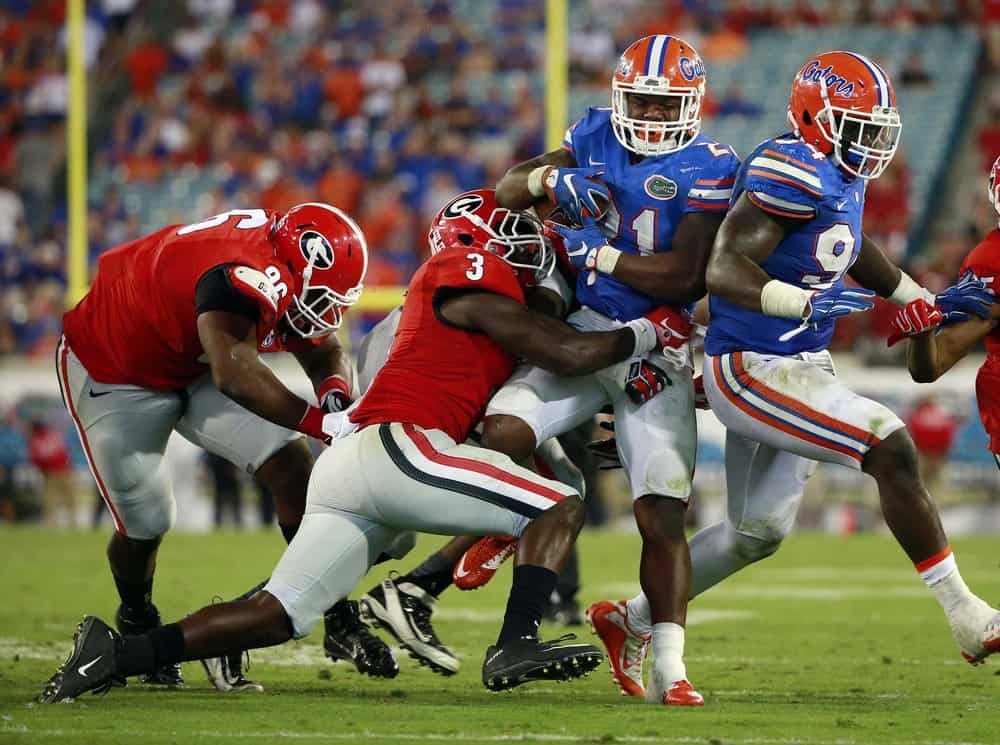 Florida and Georgia will square off in Jacksonville this weekend. (Kim Klement-USA TODAY Sports)

Welcome to the Week 9 edition of  SEC Football Predictions. Auburn and LSU and Vanderbilt and Kentucky continue to win at an astonishing rate with three of the four teams still having a shot to make it to Atlanta. Probably not, but it is the last Saturday in October and the aforementioned teams’ chances to go Atlanta following the first three weeks of the season were about as likely as a Cleveland Indians-Chicago Cubs World Series.

This is Saturday that Florida and Georgia play in the  College Football Game Between Two Teams From Two Different States In A Stadium By A River. So, let’s wait not to get deep into Week 9 of SEC Football Predictions. May your teams play four quarters and give it 110 percent and make plays and do all those things that coaches like Butch Jones enjoy talking about.

Quick word of wisdom: Although Missouri lost to Middle Tennessee State last week while Kentucky was kicking 51-yard field goals to defeat Mississippi State, the Tigers come in as a 5.5-point favorite in this game at Memorial Stadium/Faurot Field. Missouri can still score a ton of points, so that’s not a far-fetched spread.

Kentucky has more to lose and gain than Missouri, so it only makes sense to pick the game based on that. The Wildcats will suffocate under the gravity of the situation and Missouri will win a very frustrating game for Kentucky fans.
PREDICTION: Missouri 34, Kentucky 30

Big game word of wisdom: This game rarely goes in a direction that anyone expects. It is a game where the tone is usually set within the first two or three series of the first quarter.

It feels like it’s been months since we saw Florida in a game of substance. It was way back on September 24th, when the Gators blew the big lead in Knoxville to Tennessee followed by postponed games with LSU and a “meh” game against a really bad Missouri team.

Georgia went into last week’s open date with a homecoming loss to Vanderbilt. This is a surprise to no one, but that is not how a team wants to head into an open date before playing the team that has given the program fits for 25 years.

The Bulldogs keep this close into the third quarter, but the Gators defense will eventually force Jacob Eason into a couple bad throws and pull away for a big victory to stay atop the SEC East over Tennessee.
PREDICTION: Florida 28, Georgia 17

Quick word of wisdom: Is it possible for the Mississippi State version of the Bulldogs lose to the Samford version? Sure. But it’s not likely. This game may be close or may be a blowout. It will lack entertainment value, no matter the final score.
PREDICTION: Mississippi State 31, Samford 21

Quick word of wisdom: Auburn is hot and Ole Miss is so not. That may sound like a Black Eyed Peas line from 2008, but the Rebels have been two thousand and late in 2016.

Be prepared for a dramatic game that Auburn will win by double digits, but only because of a late score. The land shark defense of Ole Miss will be gashed for way too many rushing yards, which will lead to an Auburn win.

Give credit where credit is due. I criticized Gus Malzahn for his team appearing to have declined in his fourth year at Auburn, but now the cry on The Plains of “War Eagle” is one of battle and not of sadness.
PREDICTION: Auburn 38, Ole Miss 27

Quick word of wisdom: Tennessee is coming off its worst defeat in the Alabama series since 1906. South Carolina is coming off a win over UMass with Opelika, Alabama, freshman quarterback Jake Bentley making his case to be Will Muschamp’s quarterback of the future.

The team coming in to Williams-Brice this week is not UMass, and should be much healthier than they were heading into their game against Alabama. Tennessee needs to win out in order to have a chance to win the SEC East. With the Vols owning the head-to-head tiebreaker over the Gators, the Vols only need Florida to lose one of their four remaining conference games.

Tennessee is favored by 13.5 points, and they should be able to cover, even after a slow start.
PREDICTION: Tennessee 42, South Carolina 14

Quick word of wisdom: Even with a loss last week to Alabama, A&M remains arguably the second best team in the SEC. That will be proven (or not) over the month of November. This game against New Mexico State will prove little, but it will be a good warm-up to prepare for the November run.
PREDICTION: Texas A&M 56, New Mexico State 10

“This is Saturday that Florida and Georgia play in the World’s Largest Outdoor Cocktail Party College Football Game Between Two Teams From Two Different States In A Stadium By A River”
You forgot to add in somewhere The Okefenokee Oar, I have never met anyone that has not called this game the World’s Largest Outdoor Cocktail Party, what, they only serve water now? Screw them trying to change the name.
Ill take Florida, I see Ole Miss SEC schedule is starting to catch up with them, Ill take Auburn as well.

Looks like Kentucky will be going to a bowl for the 1st in 6years, congrats! I think the S. Miss lost hurt them & right now they are not playing the best teams so their a getting by, it would be funny to see them run the table & beat Tennessee & Louisville & end the year on a high note. Doubt it though.